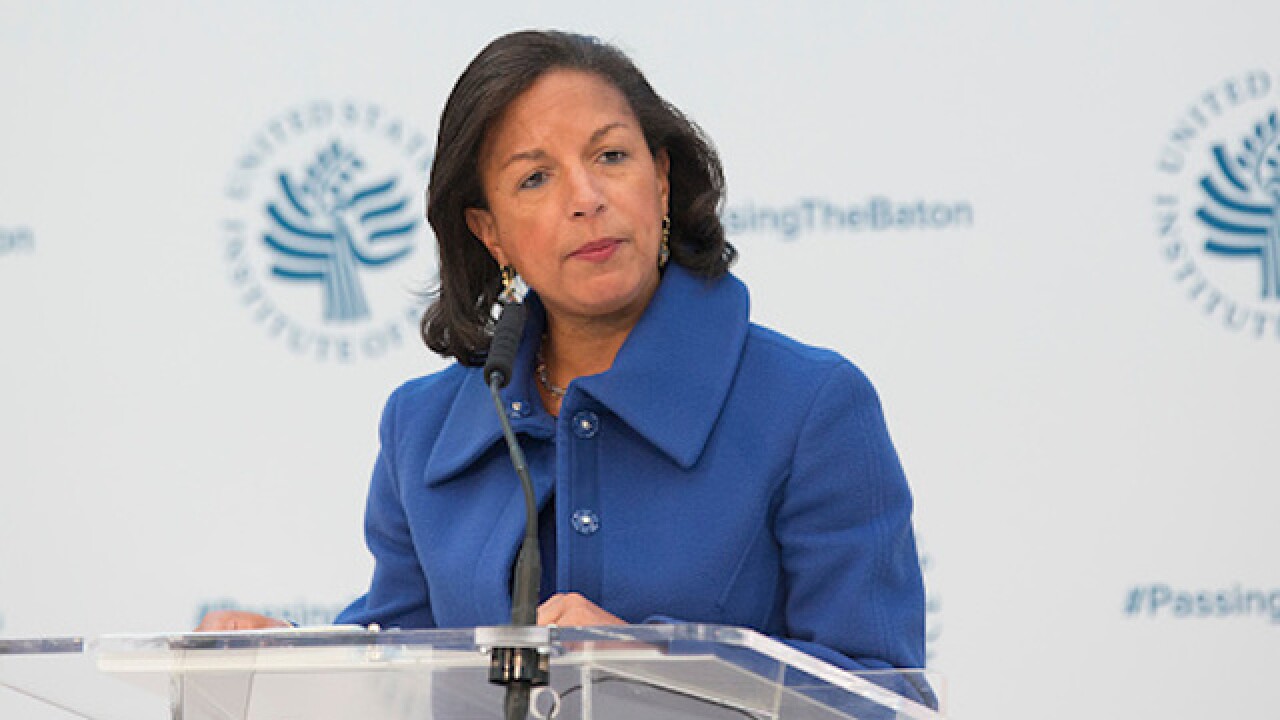 Copyright Getty Images
CHRIS KLEPONIS
<p>Ambassador Susan Rice, National Security Advisor speaks during a conference on the transition of the US Presidency from Barack Obama to Donald Trump at the US Institute Of Peace in Washington DC, January 10, 2017. / AFP / CHRIS KLEPONIS (Photo credit should read CHRIS KLEPONIS/AFP/Getty Images)</p>

President Donald Trump's decision to reorganize the National Security Council in a way that removes the director of intelligence and the chairman of the Joint Chiefs of Staff is "stone cold crazy," former National Security Adviser Susan Rice said Sunday.

Rice retweeted another Twitter user, P.E. Juan, who said: "Trump loves and trusts the military so much he just kicked them out of the National Security Council and put a Nazi in their place."

Rice, President Barack Obama's national security adviser, was reacting to an executive order signed by Trump that said that the head of DNI and the nation's most senior military officer would be invited to attend the security meetings "where issues pertaining to their responsibilities and expertise are to be discussed."

"This is stone cold crazy. After a week of crazy. Who needs military advice or intell to make policy on ISIL, Syria, Afghanistan, DPRK?" Rice tweeted, with DPRK referring to North Korea.

In contrast, Trump's order makes his chief strategist, Stephen Bannon, a regular member of the Principals Committee. The committee is Cabinet-level group of agencies that deal with national security that was established by President George H. W. Bush in 1989. Every version of it has included the Joint Chiefs chairman and the director of the CIA or, once it was established, the head of the DNI. The President's chief of staff was typically included as well.

Bannon's presence reinforces the notion he is, in essence, a co-chief of staff alongside Reince Priebus, and demonstrates the breadth of influence the former head of Breitbart News has in the Trump administration.

"I think the national security team around President Trump is very impressive. I don't think you could ask for a better one," he said on CBS' "Face the Nation."

Rice continued her tweetstorm: "Chairman of Joint Chiefs and DNI treated as after thoughts in Cabinet level principals meetings. And where is CIA?? Cut out of everything?"

And she noted a provision that would allow Vice President Michael Pence to chair NSC meetings if Trump isn't available.

And she added the observation that Trump's UN ambassador Nikki Haley, the former governor of South Carolina, was "sidelined from Cabinet and Sub Cab mtgs."

The NSC is run by National Security Adviser Michael Flynn, a former head of the Defense Intelligence Agency until he was asked to step down in 2014 by senior intelligence leaders.

Before then, the President had argued that intelligence services were politically partisan, he dismissed their findings that Russia hacked Democratic targets during the campaign and referred slightingly to the intelligence community by tweeting with the word intelligence in quotes.

In setting out the reorganization, Trump said that "security threats facing the United States in the 21st century transcend international boundaries. Accordingly, the United States Government's decision-making structures and processes to address these challenges must remain equally adaptive and transformative."