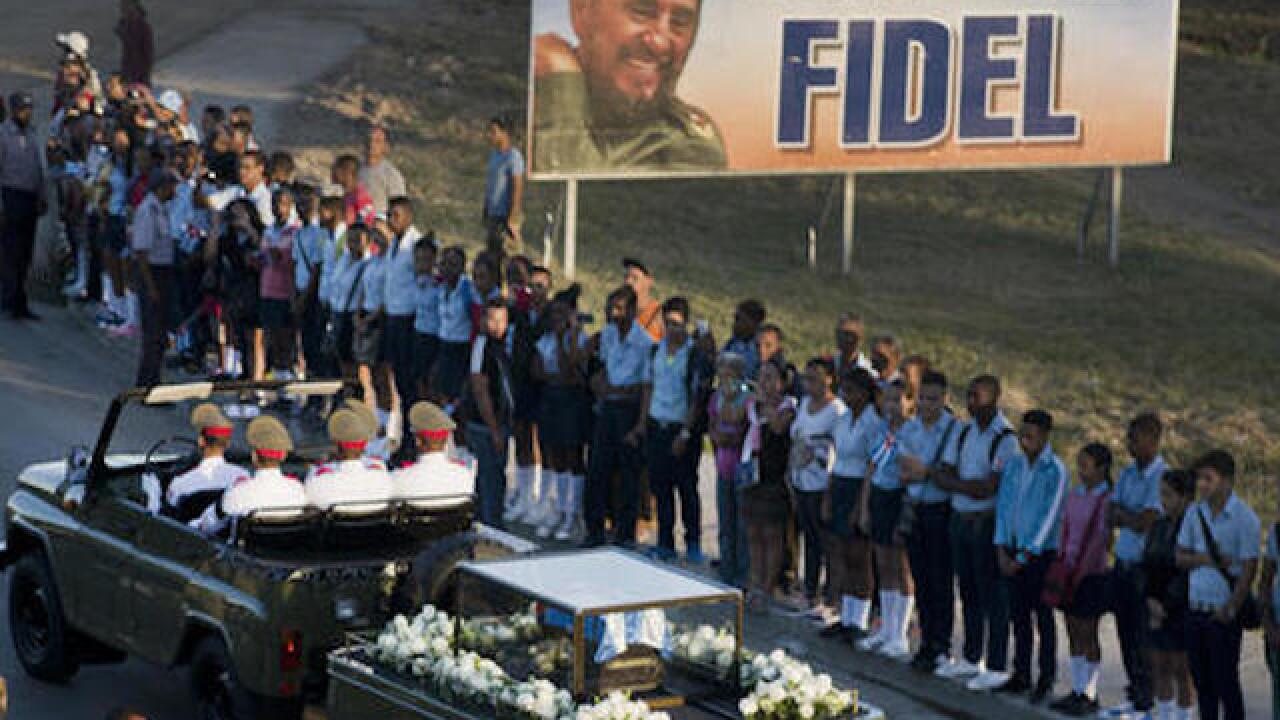 SANTIAGO, Cuba (AP) — Fidel Castro's ashes were interred in a private ceremony Sunday morning, ending nine days of mourning for the man who ruled Cuba for nearly half a century.

The military caravan bearing his remains in a flag-draped cedar coffin left the Plaza of the Revolution in the eastern city of Santiago at 6:39 a.m., returning empty two hours later. Thousands of people lined the two-mile route to Santa Ifigenia cemetery, waving Cuban flags and shouting "Long live Fidel!"

The ceremony appeared to last about 90 minutes and took place out of the public eye after Cuban officials made a last-minute cancellation of plans to broadcast the events live on national and international television. International media were also barred from the ceremony.

Martial music could be heard outside the cemetery, where Ines de la Rosa was among the mourners gathered. She said she would have liked to watch the ceremony on television, but "we understand how they as a family also need a bit of privacy."

Fellow mourner Elena Vinales said she wasn't surprised that the images of the ceremony were not broadcast. "It seems to be a family moment," she said.

The decision to hold a private ceremony came the morning after Castro's brother, President Raul Castro, announced that Cuba would prohibit the naming of streets and monuments after the former leader, and bar the construction of statues of the former leader and revolutionary icon, in keeping with his desire to avoid a cult of personality.

"The leader of the revolution rejected any manifestation of a cult of personality and was consistent in that through the last hours of his life, insisting that, once dead, his name and likeness would never be used on institutions, streets, parks or other public sites, and that busts, statutes or other forms of tribute would never be erected," Raul Castro told a massive crowd gathered in the eastern city of Santiago.

He said that Cuba's National Assembly would vote in its next session on the law fulfilling the wishes of his brother, who died last week at 90. The legislature generally holds a meeting in December and under Cuba's single-party system, parliament unanimously or near-unanimously approves every government proposal.

Fidel Castro, who stepped down in 2006 after falling ill, kept his name off public sites during his near half-century in power because he said he wanted to avoid the development of a personality cult. In contrast, the images of his fellow revolutionary fighters Camilo Cienfuegos and Ernesto "Che" Guevara became common across Cuba in the decades since their deaths.

Mourning for Castro has been fervent and intense across the country since his death, particularly in rural eastern Cuba, where huge crowds have been shouting Castro's name and lining the roads to salute the funeral procession carrying his ashes.

"All of us would like to put Fidel's name on everything but in the end, Fidel is all of Cuba," said Juan Antonio Gonzalez, a 70-year-old retired economist. "It was a decision of Fidel's, not Raul's, and I think he has to be respected."