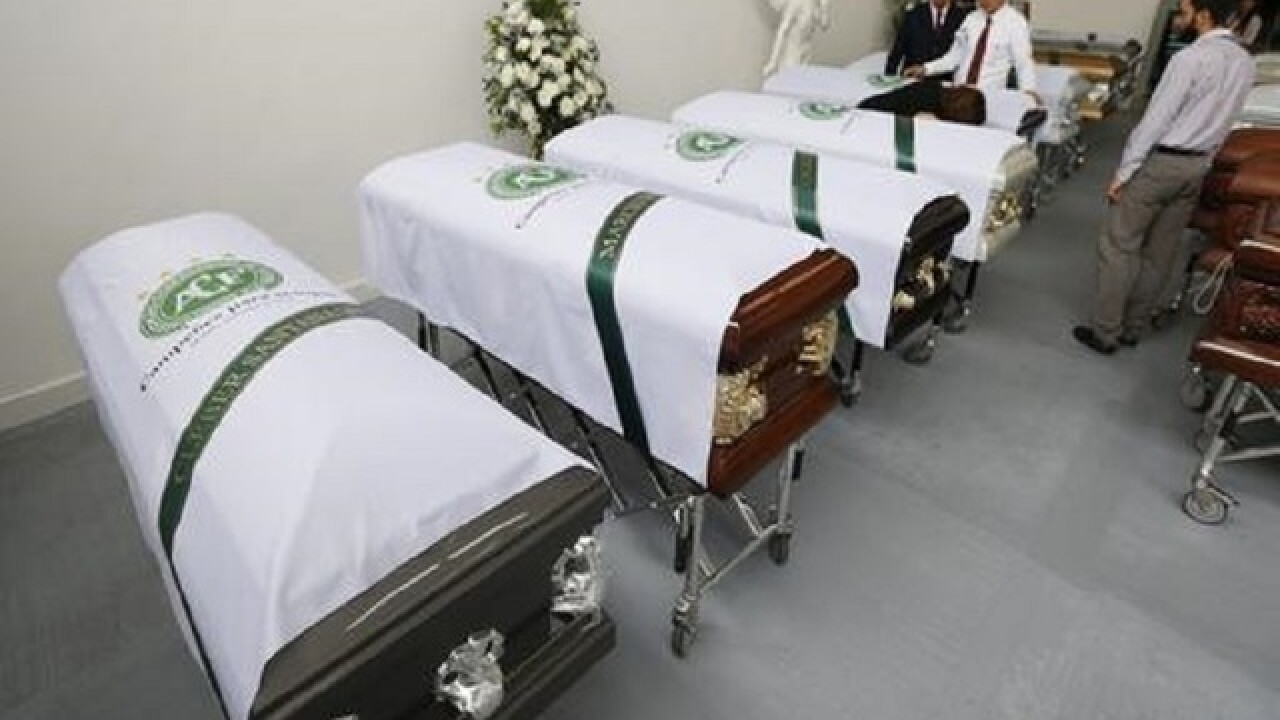 Fernando Vergara
<p>Funeral employees place white sheets with a Chapecoense soccer team logo on caskets containing the remains of team members, in Medellin, Colombia, Thursday, Dec. 1, 2016. Forensic authorities say they have managed to identify a majority of the victims of Monday's Colombian air tragedy and hope to finish their work on Thursday. (AP Photo/Fernando Vergara)</p>

By: Associated Press
Posted at 11:14 PM, Dec 01, 2016
MEDELLIN, Colombia (AP) — Families are preparing to receive the bodies of the victims of this week's air tragedy in Colombia as experts develop a clearer picture of how things went so terribly wrong with a charter flight that slammed into a mountainside.
Many of the 71 killed were players and coaches from a small-town Brazilian soccer team that was headed to the finals of one of South America's most prestigious tournaments after a fairy-tale season that had captivated their soccer-crazed nation.
On Thursday, white sheets printed with the logo of the Chapocoense soccer club lay over row upon row of caskets at a Medellin funeral home. Most of the remains had been identified and were expected to be flown home Friday.
Bolivian aviation officials announced they were indefinitely suspending the charter company that operated the flight after a recording of conversations between a pilot of the doomed flight and air traffic controllers, as well as the account of a surviving flight attendant, indicated the plane ran out of fuel. The jet, which took off from Santa Cruz, Bolivia, was flying at its maximum range when it crashed late Monday, killing all but six of the 77 people on board.
In Brazil, grieving relatives of the dead spoke out in disbelief.
Osmar Machado, whose son, Filipe, a defender on the Chapecoense team, died on his father's 66th birthday, questioned why the plane was transporting the team.
"Profit brings greed," Machado said, speaking in the team's hometown of Chapeco. "This plane ended (the lives of) 71 people."
Williams Brasiliano, uncle of midfielder Arthur Maia, said the crash could have been avoided if the team had chosen a commercial flight and not a charter.
"Look how complicated that flight was going to be even if it had arrived," Brasiliano said tearfully of the team's itinerary, which included a flight from Sao Paulo to Bolivia on a commercial airliner before the ill-fated flight to Medellin.
"I doubt that a bigger club would have done the same," he added.
Chapecoense spokesman Andrei Copetti defended the decision, saying more than 30 teams had used the Bolivia-based company, LaMia airlines, including the national teams of Argentina and Bolivia. He added that the team itself had flown on its flights before.
"They had a good service then. It was the airline that got in touch with us because they have experience in doing these long flights in South America," he said.
A recording of the flight's final minutes showed the pilot repeatedly requested permission to land because of "fuel problems," although he never made a formal distress call. He was told another plane with mechanical problems had priority for the airport's single runway and was instructed to wait seven minutes.
As the jetliner circled, the pilot grew more desperate. "Complete electrical failure, without fuel," he said. By then the controller had gauged the seriousness of the situation and told the other plane to abandon its approach to make way for the charter jet. It was too late.
The lack of an explosion upon impact also pointed to a rare case of fuel burnout as a cause of the crash of the British Aerospace 146 Avro RJ85.
The air traffic controller said in an email sent to her colleagues and released to local media Thursday that she had done everything humanly and technically possible to save the plane.
The Bolivian Civil Aviation Authority announced it had indefinitely halted all flights operated by LaMia and also was suspending some aviation officials during the investigation.
British aviation authorities said the flight data and cockpit voice recorders recovered from the accident site were being taken to Britain for study.
Copyright 2016 The Associated Press. All rights reserved. This material may not be published, broadcast, rewritten or redistributed.