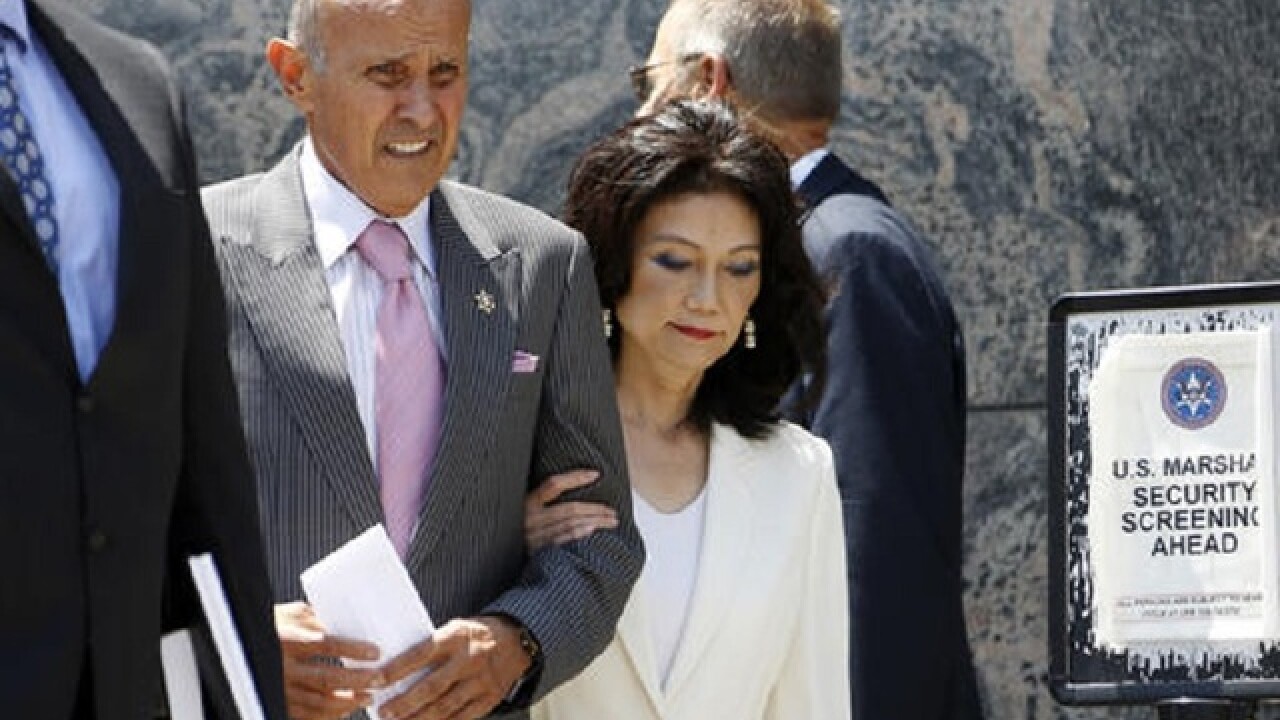 Nick Ut
<p>Former Los Angeles County Sheriff Lee Baca and his wife Carol leave federal court in Los Angeles, Monday, Aug. 1, 2016. Lee Baca withdrew a guilty plea Monday and chose to go to trial on a charge of lying to federal authorities in an effort to thwart an FBI investigation into abuses at the jails he ran. (AP Photo/Nick Ut)</p>

LOS ANGELES (AP) — Former Los Angeles County Sheriff Lee Baca withdrew his guilty plea Monday to lying about efforts to thwart an FBI investigation into abuses at the jails he ran, saying he wants to "set the record straight" at trial before he declines from Alzheimer's disease.
The decision came after negotiations to reach a new sentencing deal collapsed because there was no certainty what kind of term Baca would face after a judge rejected a plea deal as too lenient because it called for no more than six months behind bars.
Defense lawyers said they offered to have Baca serve a year, but they believed the judge wanted a sentence of several years and that was too much given the 74-year-old's prognosis and his desire to emerge from incarceration without having lost too much mental capacity.
"We have a very, very small window of time that we believe Mr. Baca's life will be normal," attorney Michael Zweiback told reporters. "There's a good likelihood that he'll be suffering very dramatically from the disease at issue. So if there was a possibility that he was going to go beyond his good years in prison, then he should go out and fight."
Judge Percy Anderson set a trial date for Sept. 20 in U.S. District Court, although that's likely to be postponed after prosecutors seek an indictment that could allege more serious offenses.
Zweiback said prosecutors told him they would seek obstruction of justice charges if Baca decided to withdraw the plea and go to trial, though he said their evidence is weak.
A spokeswoman for the U.S. attorney declined to comment on future charges or the plea deal because the case is pending.
Jurors in the case will not be able to hear about the guilty plea, but widespread publicity about it could make it harder to seat a jury.
The prospect that Baca will face a public trial as he declines from Alzheimer's is another dramatic twist in a corruption scandal that blossomed after deputies discovered an inmate was an FBI informant gathering evidence about civil rights abuses by jailers.
Even as his underlings were being charged with crimes ranging from assault to conspiracy to obstruct justice, Baca remained steadfast that he played no role in the corruption.
Baca, who resigned abruptly in 2014 after a wave of indictments were announced, said his faults were limited to being out of touch with the day-to-day operations of the nation's largest jail system that he ran for 16 years.
But earlier this year, as prosecutors prepared for trial against his top lieutenant, Baca pleaded guilty to lying to federal investigators and acknowledged he had played a role in trying to derail the probe, even telling deputies to intimidate a female FBI agent with the threat of arrest.
Two weeks ago, a remorse-filled Baca said in court that he had failed to lead and had let down the department and the public.
That wasn't enough for Anderson, who has overseen four trials related to the corruption and sentenced Baca's second-in-command for five years in prison. Anderson said it was "one thing to lie ... another thing entirely" for the county's top cop to be "involved in a wide-ranging conspiracy to cover up abuse and corruption."
That left Baca three options: cut a new deal with prosecutors and hope Anderson would accept it; allow Anderson to sentence him up to five years in prison; or withdraw the plea and go to trial.
Baca, who wore a gray pinstriped suit, white shirt, pink necktie and matching handkerchief in his breast pocket on Monday, took exception with the judge's remarks as he addressed reporters outside court and explained his reasoning for withdrawing his guilty plea.
"I made this decision due to untruthful comments about my actions made by the court and the U.S. attorney's office that are contradicted by evidence in this case," he said. "While my future and my ability to defend myself depends on my Alzheimer's disease, I need to set the record straight about me and the Los Angeles County Sheriff's Department on misleading aspects of the federal investigation while I'm capable of doing this."
Baca's condition will play a role in his defense because the "arc of the disease started well before" he lied to the FBI and federal prosecutors in 2013, Zweiback said. "We will be able to prove that in court," he said.
Prosecutors said in court briefs that they do not think that Baca's condition had any impact on his lies. Baca lied to authorities in April 2013 and didn't consult a physician about memory issues until a year later, Assistant U.S. Attorney Brandon Fox wrote in a sentencing brief.
Copyright 2016 The Associated Press. All rights reserved. This material may not be published, broadcast, rewritten or redistributed.