EU supporters parade through London in 'March for Europe' 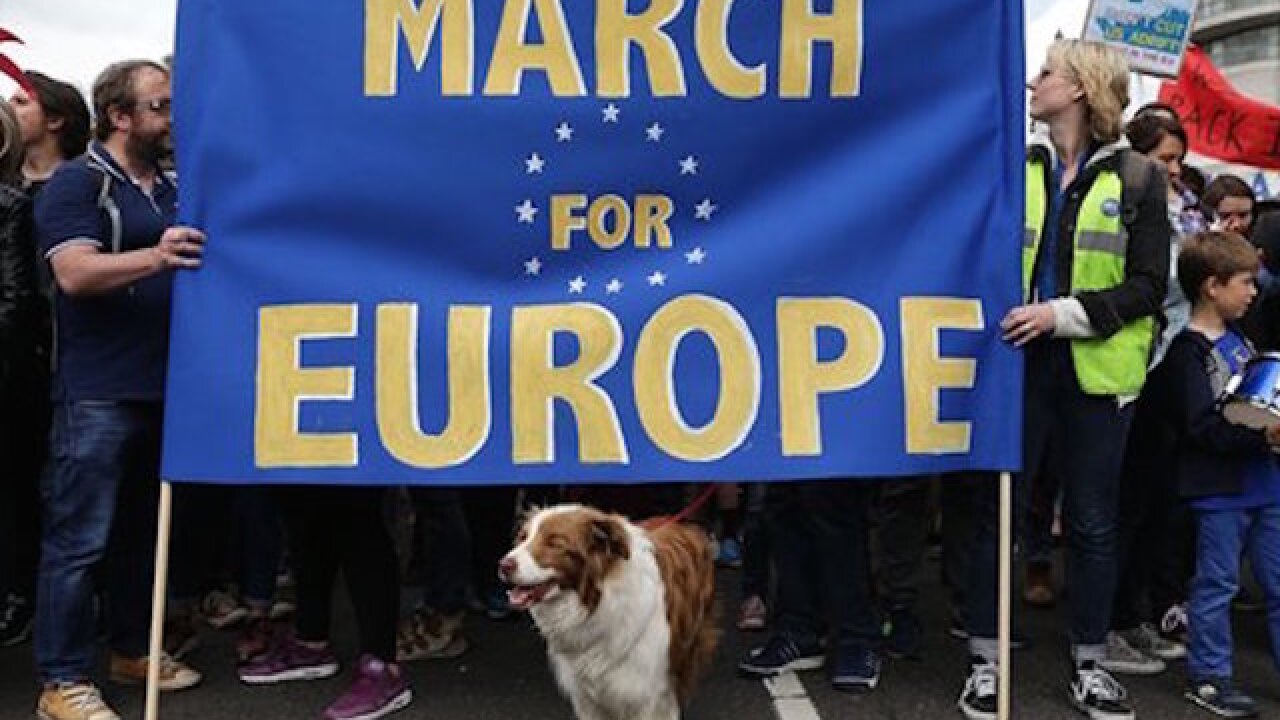 Copyright Associated Press
Daniel Leal-Olivas
<p>"Remain" supporters gather on Park Lane in London, before marching to Parliament Square to show their support for the European Union in the wake of the referendum decision for Britain to leave the EU, known as "Brexit", Saturday July 2, 2016. Demonstrators wearing EU flags as capes and with homemade banners saying "Bremain" and "We Love EU" gathered on the streets around Park Lane for the March for Europe rally. (Daniel Leal-Olivas/PA via AP)</p>

LONDON (AP) — Tens of thousands of European Union supporters sang, danced and marched their way down the streets of London on Saturday to protest the United Kingdom's vote to leave the EU.

Many participants in the celebrity-peppered 2-mile (3-kilometer) "March for Europe" from Hyde Park to Parliament said they expect the government and British lawmakers to balk on leaving the 28-nation bloc despite 52 percent voter support for the move in the June 23 referendum.

One organizer, comedian Mark Thomas, said British lawmakers should not legislate for an exit based on a result driven by anti-EU campaigners' exaggerations and distortions on immigration and EU spending.

"We would accept the result of the referendum if it was fought on a level playing field. But it was full of misinformation," Thomas said.

"No goodbyes based on lies," read one placard behind him.

Many protesters offered signs punning the EU as "you." One referencing the one-hit wonder of Rick Astley noted: "Never gonna give EU up, never gonna let EU down."

Along the way to Parliament, where some demonstrators planned to hand a petition at the prime minister's office at nearby 10 Downing Street, the crowd chanted: "I don't want to leave EU! We are Europeans too!"

At the demonstration's rally point in Parliament Square, thousands heard a video message from singer Jarvis Cocker, who held up a world map and observed: "You cannot deny geography. The UK is in Europe."

Irish rock singer Bob Geldof appealed to the protesters to commit themselves to two years of campaigning against a British exit. He said supporters of EU membership "must do everything possible within our individual power to stop this country being totally destroyed."

But leaders of the anti-EU campaign accused Saturday's protesters of failing to respect democracy and the wishes of the 17 million Britons who voted to leave the EU.

"A gentle reminder, 'remain' friends, that more people voted to leave the EU than have voted for anything else, ever," a Conservative Party member of the European Parliament, Daniel Hannan, said in a tweet.