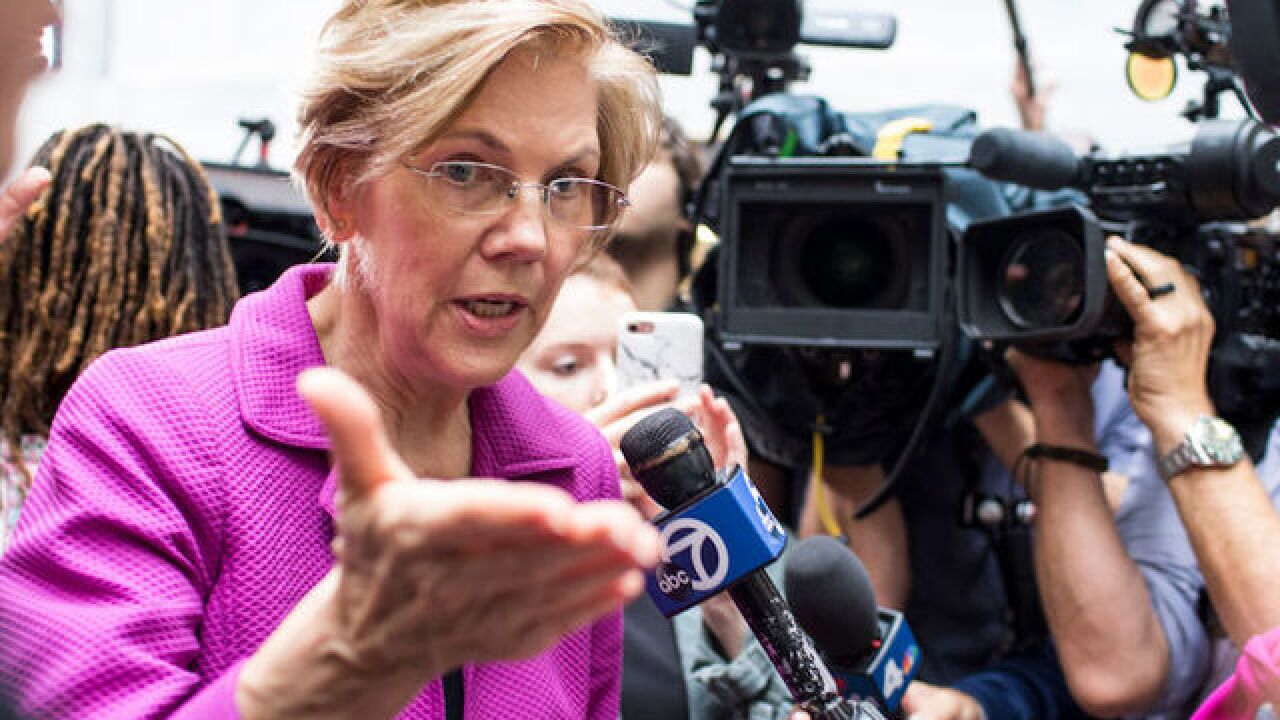 Image copyright 2018 Getty Images. All rights reserved. This material may not be published, broadcast, rewritten, or redistributed.
Zach Gibson
<p>Sen. Elizabeth Warren (D-MA) speaks to members of the press during a demonstration against Supreme Court Nominee Brett Kavanaugh in the Hart Senate Office Building on September 27, 2018 in Washington, DC.</p>

Sen. Elizabeth Warren has released the results of a DNA analysis showing she has distant Native American ancestry, which could pre-empt further questions and attacks should she run for president in 2020.

Warren first faced scrutiny for her purported Native American heritage during her 2012 Senate race. But President Donald Trump has revived and amplified the controversy as he eyes Warren as a possible rival, frequently mocking her with the nickname "Pocahontas."

But Warren now has documentation to back up her family lore, thanks to an analysis performed by Carlos Bustamante, a professor of genetics at Stanford and adviser to Ancestry and 23 and Me.

In a rollout video about Warren's heritage, the Massachusetts Democrat is seen sitting behind a laptop as she calls Bustamante.

"Now, the President likes to call my mom a liar," Warren asks him. "What do the facts say?"

Bustamante responds, "The facts suggest that you absolutely have a Native American ancestor in your pedigree." Warren is shown nodding.

Bustamante's full report is now posted on Warren's website, along with other supporting documents and interviews detailing her background.

According to the report, "the great majority of (Warren's) identifiable ancestry is European." However, the report adds, "The analysis also identified 5 genetic segments as Native American in origin at high confidence."

Bustamante's analysis places Warren's Native American ancestor between six and 10 generations ago, with the report estimating eight generations. "The identity of the sample donor, Elizabeth Warren, was not known to the analyst during the time the work was performed," the report says.

Warren's video makes clear that it is in part a response to Trump's attacks, opening with a clip of the President mocking Warren as "Pocahontas." Members of Warren's family express their disappointment with the President's taunts in a series of interviews.

"He's talking about stuff he doesn't have any idea about," Mark Herring, Warren's nephew, says in the video.

The video also tackles the question of whether Warren's Native American heritage played any role in her professional advancement. That issue has been raised by the White House as well, with press secretary Sarah Huckabee Sanders saying during one briefing, "What most people find offensive is Sen. Warren lying about her heritage to advance her career."

Warren's purported Native American heritage was touted by Harvard Law School when she was a professor there. But Warren's video includes testimonials from faculty at Harvard Law, the University of Houston, University of Pennsylvania Law School and UT Austin School of Law insisting Warren's professional advancement was not tied to it.

"Her heritage had no bearing on her hiring," Jay Westbrook of the UT Austin School of Law says in the video. "Period."

Her campaign has also published a lengthy archive of university documents to support these claims.

The information is unlikely to dissuade the President from continuing to zero in on the controversy surrounding Warren's background. At one rally, depicted in Warren's video, Trump offered to donate $1 million to charity if Warren were to take a DNA test "and it shows you're an Indian."

Warren concludes that the issue "isn't just about casual racism," but part of a pattern of "discrimination, neglect and violence" that Native communities have faced "for generations."

"And Trump can say whatever he wants about me," she adds. "But mocking Native Americans or any group in order to try to get at me that's not what America stands for."