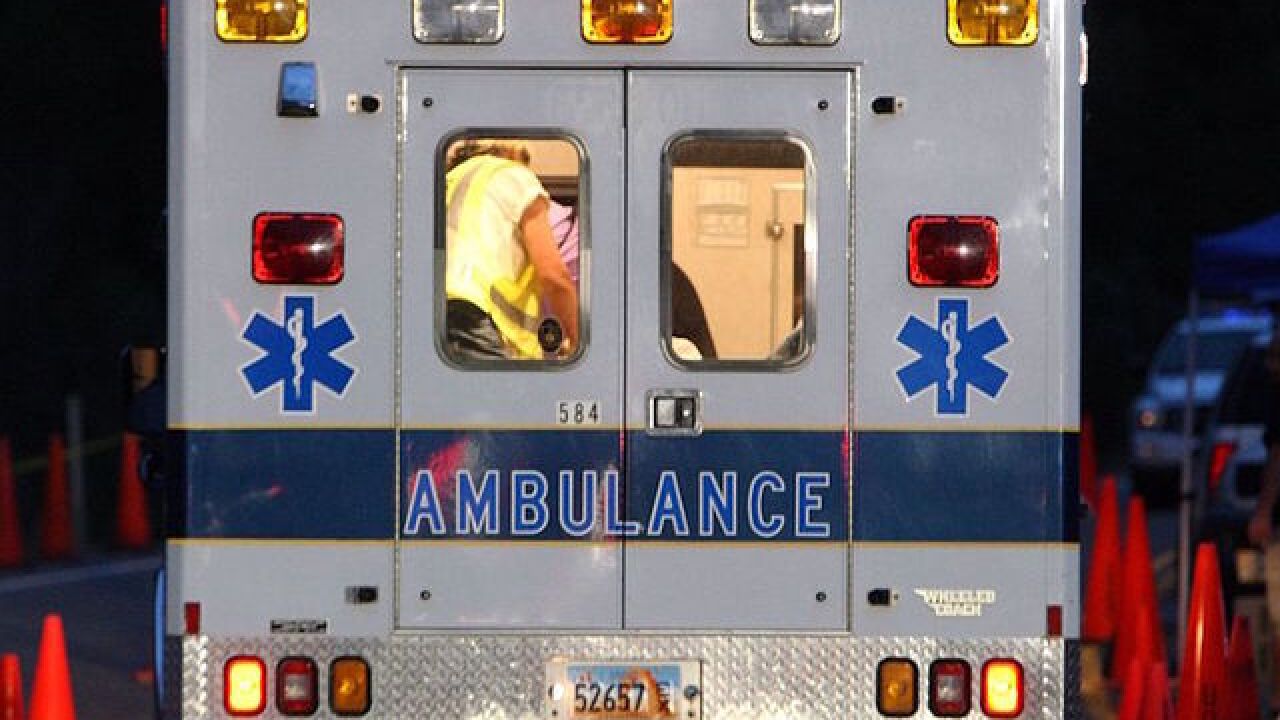 Copyright Getty Images
Justin Sullivan
<p>HUNTINGTON, UT - AUGUST 16: An Emery County ambulance leaves the Crandall Canyon coal mine August 16, 2007 near Huntington, Utah. Several ambulances and a MEDEVAC helicopter arrived at the mine in the evening as rescuers were injured during a collapse as they searched for six coal miners trapped 1,500 feet beneath the surface at the Crandall Canyon coal mine after an August 6 cave-in. (Photo by Justin Sullivan/Getty Images)</p>

Residents in a Springfield Township, Ohio neighborhood had no idea one of their neighbors was living in squalor until emergency vehicles lit up their typically quiet street.

The smell of human excrement reached the sidewalk as emergency responders worked to remove a 550-pound elderly woman from her living room chair Thursday evening. Barbara Foster, 75, had been sitting in the same place since July, 2016 — long enough for her body to weaken and her skin to mold to the chair's shape, according to a Lucas County Sheriff's Office report.

"I was also advised that Barbara was so physically weak that bones in her body were breaking when EMS was attempting to carry her out of the house," the report read.

Foster was taken to the University of Toledo Medical Center, the former Medical College of Ohio hospital.

A hospital spokesman on Friday said no information was available for a patient by that name.

Caution tape surrounded the property, and surgical-type face masks were discarded on the front lawn.

Sheriff's investigators believe Foster moved to the area from Arizona and had taught at Toledo Public Schools. They are not aware of any living relatives in the region, sheriff's Lt. Dave Carter said.

The Area Office on Aging had not had contact with Foster, but officials called her situation "extreme."

"The hope is not to have something get to this extreme. We don't want this to be the norm," said Pam Wilson, the agency's senior vice president of long-term care. "That's why we're here. We're here to link people up with help."

Wilson said the Toledo community is rich with resources and services for the elderly and disabled, and help is available to prevent situations from becoming emergencies. All it takes is a phone call to the agency's office or local law enforcement.

"To see somebody not be connected just kind of breaks your heart," she said.

Neighbors said they did not know Foster but recalled a volunteer from her church regularly stopping by her home. Robbie Zolciak said he believes Foster has lived next door to him since he and his wife bought their home about 10 years ago. He said he used to smile and wave to her when he mowed his lawn, but he never spoke to her.

"It's been years since I've physically seen her," Zolciak said.

A volunteer with Our Lady of Lourdes church, where Foster was also a member, told investigators he had delivered food to her home for the past 10 years. He said he was used to the smell but called 911 on Thursday because Foster was "not acting herself," according to the sheriff's office report.

He could not be reached for comment, and church officials did not return calls seeking comment Friday.

Foster's neighbors flocked to their front lawns Thursday evening to witness the commotion. It's a quiet neighborhood, Zolciak said, so the emergency lights were out of character.

"I've never seen so many people suited up," he said. "It was quite a scene."

Zolciak added the neighbors looked out for each other in terms of reporting possible vandals and speeding vehicles, but he was unaware Foster was in poor health.

Bill and Honey Malik have lived on the block since 1995 and said they didn't know Foster's name until this week.

Malik said she saw her neighbor once years ago walking down her driveway with two canes. But the next time she saw Ms. Foster was on Thursday as medics moved her to an ambulance on a stretcher.

Detectives are now reviewing the case for any potential crime, Lieutenant Carter said. He declined to specify.

Foster was nearly $1,400 behind on her property taxes, according to county auditor records. She missed her first payment — $687 — in July, about the time she became confined to her chair.

Investigations of abuse and neglect on the elderly are handled by Adult Protective Services through Lucas County Job and Family Services.

Michelle Niedermier, JFS director, said state law prohibits the agency from confirming investigations of alleged neglect or abuse, including those that could have been the result of an elderly person's own actions.

She said about 12 cases of alleged abuse or neglect were referred to the office in 2016.

In 2006, Foster filed a complaint with the Lucas County Sheriff's Office against a woman she had allowed to live with her in return for assisting her with chores. Ms. Foster accused the woman of threatening to burn down her house if she didn't give her $3,000, court records show.

Deputies in the sheriff's records office said they received phone calls this year from the Burnham Green address on May 5 to report a burglary and May 29 on a criminal damage incident. No reports were made on either incident, deputies said.