Drug-resistant superbug may be more widespread than previously known 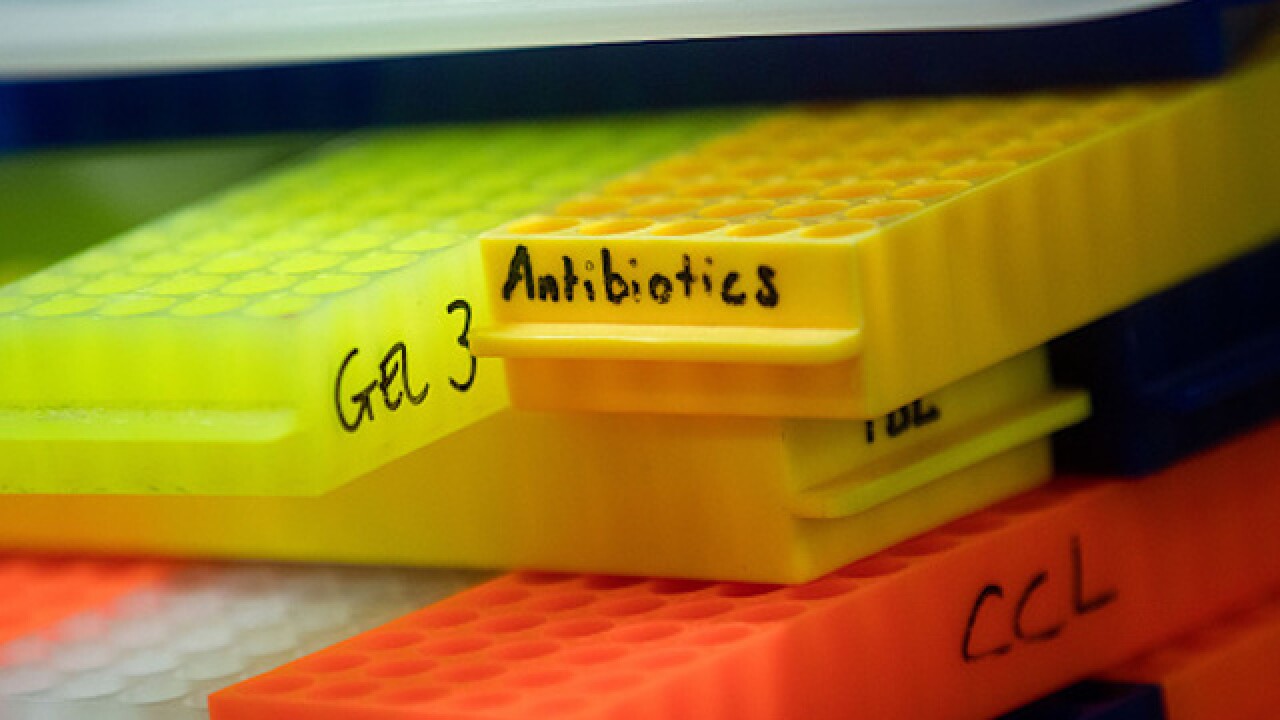 Copyright Getty Images
Simon Dawson
<p>Trays, included one labeled with 'antibiotics' sit after being used in experiments at the new laboratories inside the Francis Crick Institute in London, U.K., on Thursday, Sept. 1, 2016. The institute, which aims to be Europe's largest science research center in one building when completed, gets about one-third of its employees from the EU, says Chief Executive Officer Paul Nurse. Photographer: Simon Dawson/Bloomberg</p>

(CNN) -- One family of superbugs, known as carbapenem-resistant Enterobacteriaceae or CRE, may be spreading more widely than previously thought, according to a study published Monday (PDF) in the journal?Proceedings of the National Academy of Sciences.

In fact, transmission of these bacteria person-to-person may be occurring without symptoms, say the researchers, from the Harvard T.H. Chan School of Public Health and the Broad Institute.

"We often talk about the rising tide of antibiotic resistance in apocalyptic terms," said William Hanage, senior author of the study and an associate professor of epidemiology at the Harvard Chan School. "But we should always remember that the people who are most at risk of these things would be at risk for any infection, because they are often among the frailer people in the health care system."

When an illness-causing bug won't disappear with the usual drugs, patients are given last-resort antibiotics such as carbapenem. Still, some "nightmare bacteria" continue to thrive even when given the strongest medicines reserved for the toughest cases. CRE, which tend to spread in hospitals and long-term care facilities, cause an estimated 9,300 infections and 600 deaths each year in the United States, according to the Centers for Disease Control and Prevention.

And they are on the rise.

The genetics of infection

Over a 16-month period, the Harvard-MIT research team examined genetic sequences from about 250 samples of patients who had CRE in four hospitals in Boston and Irvine, California.

"A lot of people have done a lot of really good work by focusing on things like outbreaks," Hanage said. He and his colleagues were aiming instead to get a "population snapshot" of CRE, to define how frequently these infections occurred and to understand which bacterial strains were causing infections within hospitals.

"We tried to get an idea of what the population was, and that enabled us to capture the diversity of these things, which were causing disease in the hospitals we studied," Hanage said.

First, the researchers found very little evidence of direct transmission between patients who became sick. "There's one, maybe two, in all the samples we looked at," Hanage said. Based on this, he and his colleagues believe transmission may be occurring without causing symptoms.

In other words, people colonized with these germs may spread them, a la Typhoid Mary, without ever becoming sick themselves.

According to Dr. Alex Kallen, a medical officer in the CDC's Division of Healthcare Quality Promotion, who was not involved in the study, "the most common source of transmission with CRE is asymptomatic." Most patients will not have any symptoms of CRE, which lives in the gastrointestinal tract, according to Kallen.

The study also documented "the identical gene in different species. ... The extent to which this has happened is really quite surprising," Hanage said. Also, "we found two cases of high-level resistance we could not explain."

This he compared to "dark matter: We know it's there because we can see its effects, but what's actually making it happen at the moment is unknown."

"If I were to criticize my own work, I would say it is a shame that we weren't able to get more hospitals and more samples from elsewhere within the health care systems," Hanage said.

Limited by funding, the researchers could not track whether transmission had occurred in a long-term care facility or in the community, outside the hospitals they studied.

This was the case in one recent CRE infection in a hospital in Reno, Nevada.

The patient, a Washoe County woman in her 70s, had been living for an extended period in India. She returned to the US in early August.

On returning, the woman suffered systemic inflammatory response syndrome -- a whole-body immune system reaction to an infection -- and was admitted to a Reno hospital. Notably, she had been hospitalized in India just two months before, one of several hospitalizations due to complications from a thighbone fracture.

She was in the Reno hospital almost six days before the CDC confirmed her infection as a strain of CRE called NDM.

"There are two primary types of CRE. One of them is called New Delhi metallo-beta-lactamase, or NDM, and another one is called Klebsiella pneumoniae carbapenemase, or KPC," said Lei Chen, senior epidemiologist for the Washoe County Health District.

Both strains both have specific enzymes that can break down carbapenem antibiotics, rendering these powerful drugs ineffective, explained Chen. Generally, KPC is more prevalent in the US than NDM: The CDC recorded 175 NDM cases as of January 6.

In the case of the woman in Washoe County, her infection was resistant to all 26 antibiotics available in the US, which is very rare.

"The treating physicians were trying their best," Chen said. Once they received the advanced lab results, the doctors switched antibiotics accordingly, but their patient still developed septic shock and died in early September.

"Unfortunately, the patient progressed very fast," Chen said, explaining that things are sometimes just beyond the doctor's control: "They just run out of options."

However, there was still work to be done in order to protect the community. To find out whether others had been infected, Chen and her colleagues performed a survey among patients admitted to that same unit.

"We did a rectal swab for those patients, and the laboratory didn't identify any additional CRE," she said. The ongoing surveillance program for monitoring CRE, which had been in effect since 2010, also has not identified any additional cases up to and including today.

"I think the hospital did an excellent job in identification of the case and putting contact precautions immediately after," Chen said. "This hospital is doing an excellent job in terms of hand-washing compliance, according to the infection-control people, so I think that contributed to that, as well."

Another lucky break: The woman was in a single-patient room from the start of her hospitalization and so did not spread her infection to a roommate.

Hanage sees this case as "an illustration of the sort of thing that we are up against. These bacteria are deadly. ... So we would be well-advised to do everything we can to keep them rare."

"If we want to keep them rare, we have to understand first how much of them are out there, how many there are out there, where they are and how they're transmitting from person to person," he said.

The Dutch have one of the lowest rates of antibiotic resistance globally, he noted, because they identify people who are at risk before they come into the hospital.

The importance of handwashing

Though it is easy to feel helpless, each of us can play a role in preventing the spread of these terrifying bacteria.

Hand hygiene and environmental sanitation are essential to preventing the spread of all bacteria, according to Kallen.

"Make sure people are washing their hands when caring for you. Make sure they are cleaning equipment," he said. Though we may feel at our weakest while staying in a hospital, it is important to speak up if health care providers do not stop and clean their hands.

Chen and her colleagues suggest an approach quite like that of the Dutch, where health care facilities get a history of health care exposures outside their region upon admission, and consider screening for CRE when patients report having visited a place with a higher incidence of CRE.

"Of course, obtaining the history is not difficult, right? It can just be implemented into the intake questions," Chen said. After Ebola, measles and Zika, many hospitals are already noting travel history during admission.

"For CRE testing/screening, every hospital can do that. It's just a routine bacteria culture first, and then after identifying the organism, they perform the antibiotic susceptibility testing," she said.

Not every hospital has the capacity to detect the exact CRE mechanism. Still, she said, the patient can be immediately isolated while the hospital waits for more advanced results.

According to Hanage, the trend is toward using genomics to identify patterns of transmission, the amounts of gene diversity and the presence of resistant organisms.

In 10 years, he imagines a system that is "rapidly taking environmental samples."

"New threats would be identified and flagged quickly so we can direct our resources most effectively," Hanage said. "In order to be able to do that, you have to know what you are looking for, and so work like this is helpful to tell us what we should be looking for and where we should be worried."