Dozens of bodies being retrieved after Egypt boat tragedy 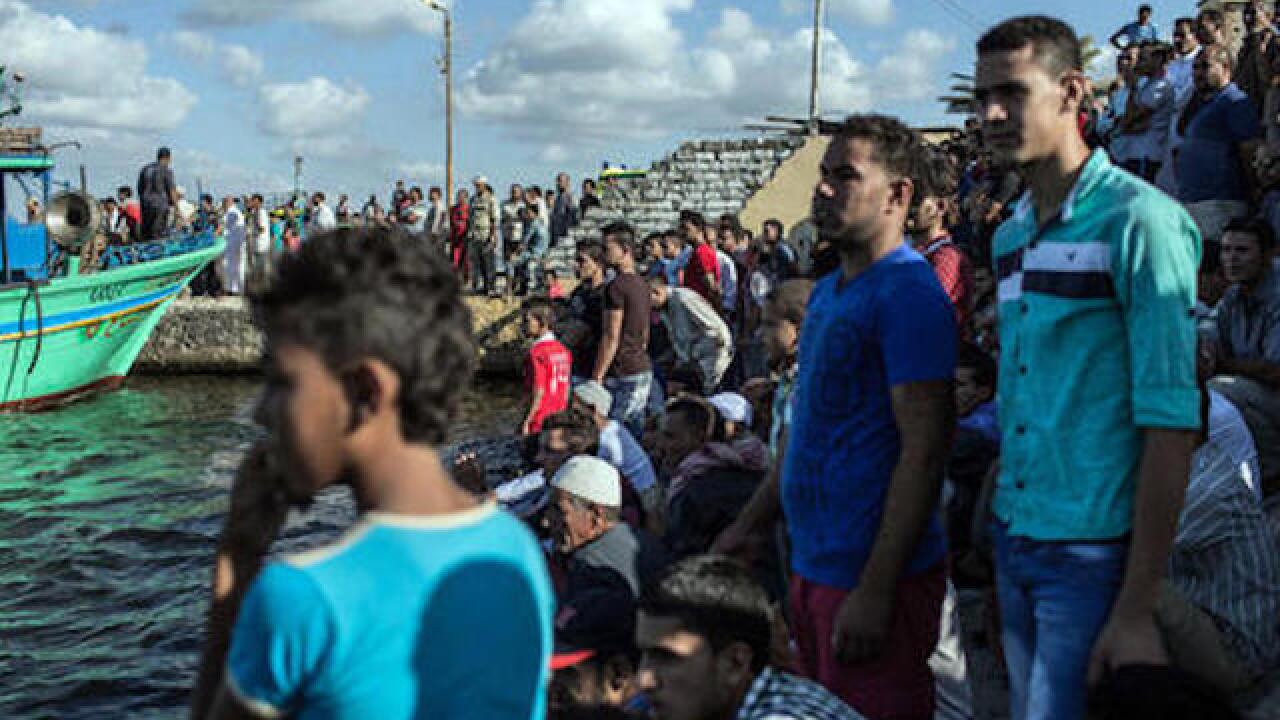 Copyright Associated Press
Eman Helal
<p>Egyptians wait on shore as a coast guard boat arrives carrying the bodies of migrants from a Europe-bound boat that capsized off Egypt’s Mediterranean coast, in Rosetta, Egypt, Thursday, Sept. 22, 2016. According to the Egyptian health ministry, at least 50 bodies have been recovered so far from the early Wednesday disaster and up to a 100 more migrants remain unaccounted for in what could potentially rank among the deadliest incidents in the migrant route across the Mediterranean. (AP Photo/Eman Helal)</p>

ROSETTA, Egypt (AP) — Dozens of bodies, many decomposed, were being pulled out of the waters off the Egyptian coast on Friday, three days after hundreds of migrants heading to Europe, drowned when their overcrowded boat capsized.

An Associated Press reporter near the Nile Delta city of Rosetta saw between 20 to 30 bodies early Friday morning, brought in by fishing boats and delivered to a group of waiting ambulances lining up at the coast guard pier.

The death toll from the incident is at least 70 and will likely rise. Many of the dead are women and children who were unable to swim away when the boat sank on Wednesday.

The UNHCR estimated that the boat was packed with some 450 people, while the state news agency MENA said earlier that the number might be as high as 600.

"UNHCR is deeply saddened by the loss of life after yet another boat capsized in the Mediterranean," the U.N. refugee agency said in a statement. Of the 150 people rescued, UNHCR said that the majority are Egyptians in addition to Sudanese and other nationalities including Somalians and Eritreans. Four people described as smugglers were arrested on Thursday and authorities are investigating the incident.

Egypt has been a traditional route of migrants to Europe by sea, however since 2014, UNHCR said, there has been a steady increase in the number of migrants intercepted while trying to leave. EU border agency Frontex recently said more than 12,000 migrants arrived in Italy from Egypt between January and September, compared to 7,000 in the same period last year.

Over 4,600 people of different nationalities were arrested this year, UNCHR said, a 28-percent increase compared to last year.

At a small pier called el-Borg, hundreds of families gathered hoping to identify the bodies of their loved ones. Women screamed, and relatives pushed and shoved while swarming the ambulances heading to the hospital.

Fishermen said that they had difficulty collecting the badly decomposed bodies, with one saying, "We didn't know how to pull them."

The intense smell of decay filled the air and many covered their faces with masks.

Survivors and relatives told the AP earlier that the boat sank around 5:30 a.m. on Wednesday, nearly 12 kilometers (7.5 miles) from the Egyptian coast and it took the coast guards around six hours to come to the rescue. Fishing boats in the vicinity were the first to provide help.

At Rosetta General Hospital, Abdel Raouf Mustafa Abdel Garih, father of a still-missing migrant, spoke late Thursday about his son: "a young man, who was 23 years old, he left on the basis that he would go work there, and the boat never came back, and we don't know where he's headed now. We've been here for three days now."

Many of the survivors were detained briefly by police, before they were released. Some of those rescued after suffering injuries were taken to hospitals, where they lay handcuffed to beds under police guard.

After his release, survivor Ahmed Darwish commented, "My advice is that no one should undertake this risk, and especially anyone who saw these things, they will never do it again."

Thousands of illegal migrants have made the dangerous sea voyage across the Mediterranean in recent years, fleeing war and poverty in the Middle East and elsewhere.