Donald Trump retweets wrong Ivanka — and she hits back 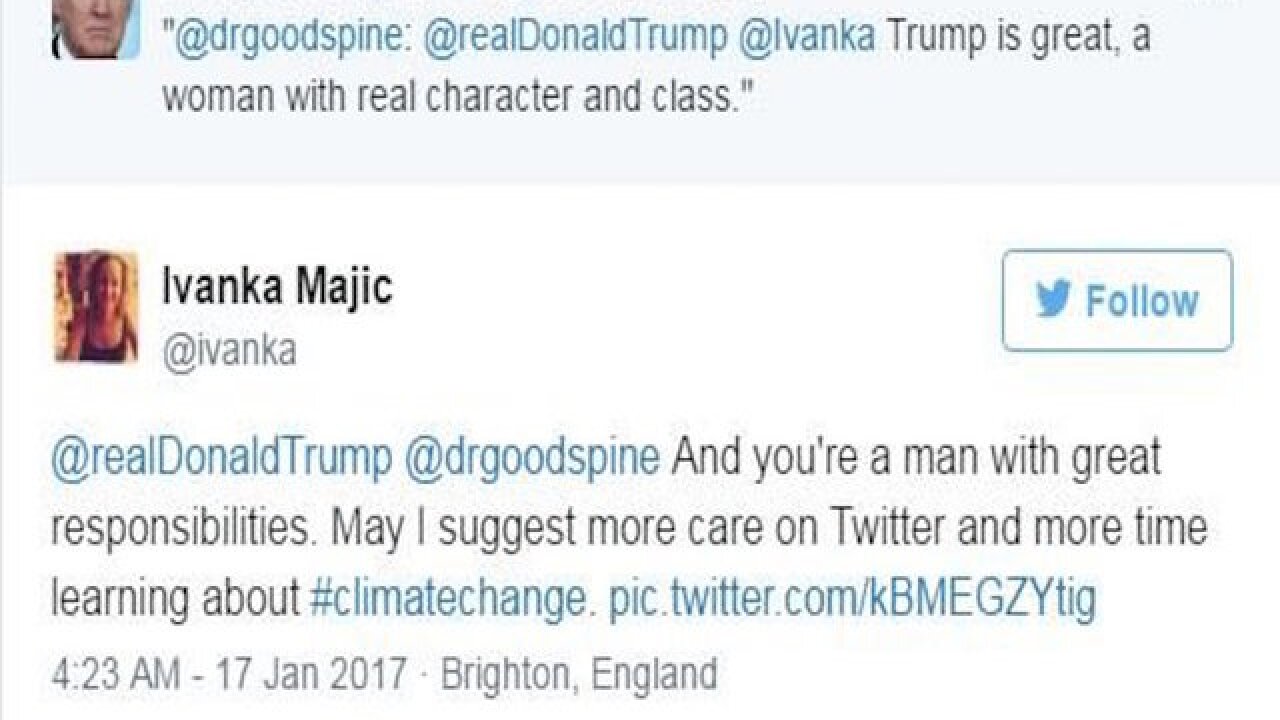 CNN
@realdonaldtrump/@ivanka
<p>President-elect Donald Trump tweeted at the wrong Ivanka on Monday night, and the British woman on the receiving end of his praise has hit back.</p>

LONDON (CNN) -- President-elect Donald Trump tweeted at the wrong Ivanka on Monday night, and the British woman on the receiving end of his praise has hit back.

Trump had quoted a tweet praising his daughter Ivanka, but the account mentioned in the tweet belongs to Ivanka Majic, a digital consultant from the British seaside town of Brighton.

Majic responded to the President-elect on Tuesday morning with a tweet of her own: "And you're a man with great responsibilities. May I suggest more care on Twitter and more time learning about #climatechange."

@realDonaldTrump @drgoodspine And you're a man with great responsibilities. May I suggest more care on Twitter and more time learning about #climatechange. pic.twitter.com/kBMEGZYtig

Majic told CNN that she saw Trump's Twitter blunder as an opportunity.

"The interesting thing about my being dragged into a Twitter conversation with Trump is that my politics are very different than his," Majic said.

The case of mistaken Twitter identity began when Trump quoted another user's praise for his daughter, who was the subject of a CNN special report that broadcast on Monday evening.

"@Ivanka Trump is great, a woman with real character and class," read the tweet Trump shared from Massachusetts chiropractor Lawrence Goodstein, whose account has since been changed to private.

Goodstein mistakenly used the handle @Ivanka, rather than @IvankaTrump. It's not a huge error for a Twitter user with less than 100 followers, but when Trump re-tweeted it to his audience of over 20 million, the message triggered a Twitter storm -- it was shared more than 5,000 times, favorited over 30,000 times, and garnered over 8,000 replies.

All this while Majic was sleeping.

Majic, a researcher for Brighton and Hove City Council who has also worked for Britain's Labour Party, said that she and her husband were awoken at 6 a.m. by calls and text messages from the media.

"It's not every morning, well it's never really, that I wake up and find that lots of international news agencies want to talk to me," Majic told CNN. "I had many, many mentions. I normally try to reply politely, but I'm not going to be able to get back to everyone today."

Trump's tweet, which was directed at the unassuming Majic, had not been deleted or acknowledged as a mistake at the time of writing.

Majic is not a frequent Twitter user, with just a handful of tweets in the past week.

Just four days ago Majic had tweeted a link to a news story in Brighton's local paper about the coastal town's "thriving food scene," commenting, "Made the local paper. Fame at last!"

The Twitter chaos seemed to go unnoticed by the incoming first daughter, who shared a photo of herself with the hashtag #datenight with her 2.74 million followers.

She posted the photo after Trump tweeted concerns over CNN's report: "At 9:00 P.M. @CNN, of all places, is doing a Special Report on my daughter, Ivanka. Considering it is CNN, can't imagine it will be great!"

Earlier this month, Trump's new top spokesman said to expect the President-elect's tweeting to continue, possibly from multiple fronts, after the inauguration.

In an interview with Fox News, incoming White House press secretary Sean Spicer said that Trump would "probably be tweeting from both" his current Twitter account (@realDonaldTrump) and the official account currently held by President Barack Obama (@POTUS). "Or whatever he chooses," Spicer said.