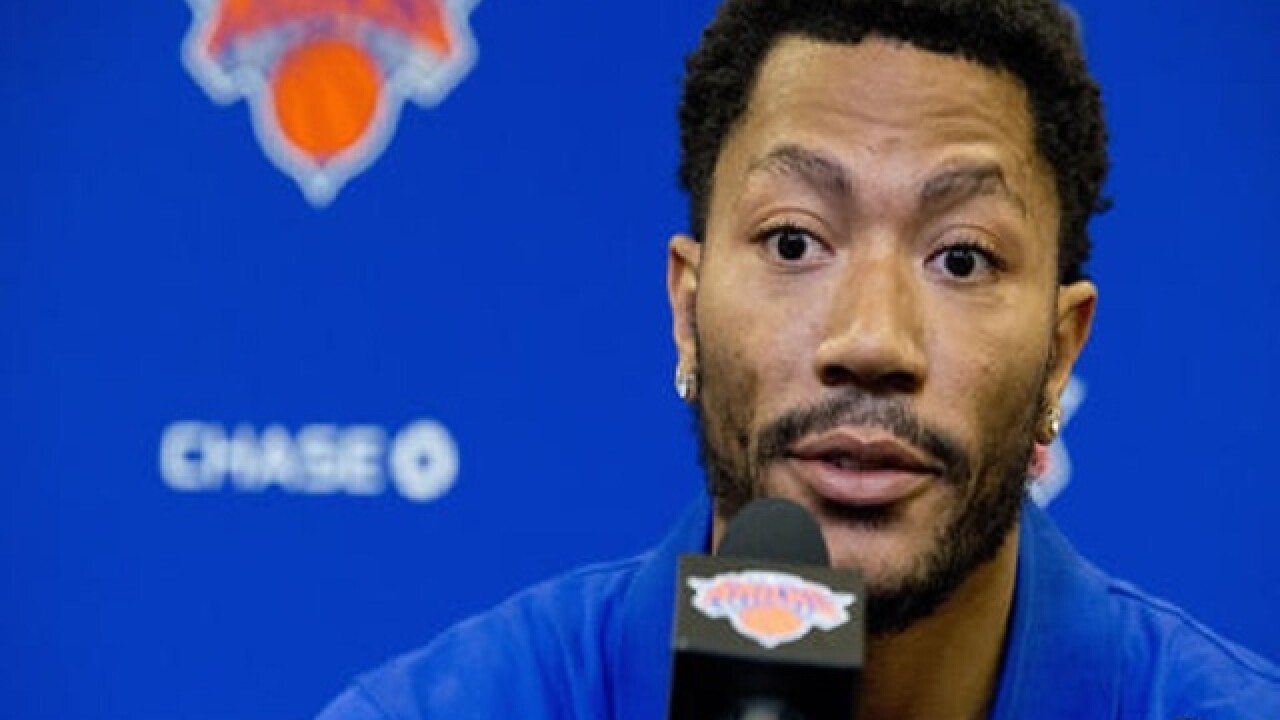 LOS ANGELES (AP) — NBA star Derrick Rose will begin trial in a $21 million rape lawsuit Tuesday, the same day the New York Knicks' preseason begins. It's unclear whether Rose will be in court or with his new team.

Rose and two friends are accused of gang raping an incapacitated woman he once dated. Jury selection in the case begins Tuesday.

Rose and the woman, identified so far only as Jane Doe, had dated on and off in the two years prior to the August 2013 incident at her apartment. Rose and his friends denied the allegations and said the sex was consensual.

"I feel like I'm innocent and I feel like I didn't do anything wrong," Rose told reporters two weeks ago.

Rose is expected to attend portions of the trial, though his lawyer said he may miss jury selection because it conflicts with the Knicks preseason opener in Houston.

In addition to overshadowing Rose's attempts to bounce back from injuries that sidelined him the past few seasons, the case threatens to expose details of his sex life, including text messages discussing his desire to have group sex.

The woman said that she had been drinking vodka, tequila and wine before returning from a house Rose rented in Beverly Hills and passing out in her apartment. She said Rose and his friends, Randall Hampton and Ryan Allen, let themselves into her apartment in the early morning and raped her.

She said she was confused when she woke up the next morning with her dress over her head and a saw used condom on the floor.

"I felt just dirty," she told the AP. "I didn't want to believe it was true."

The woman claimed she was drugged, though Rose's lawyers said there's no evidence of any drugs.

Rose's lawyer said she let the trio in through two locked doors and was alert and cleaned up after sex.

Rose's lawyers said the woman is hiding behind a cloak of anonymity while trying to extort millions from the former MVP.

The woman has wanted to remain anonymous because she was harassed online after her name was leaked and she didn't want her conservative Mexican immigrant parents to learn about the incident. She said they don't know anything about the alleged rape or her relationship with Rose.

She didn't report the incident to police until last year — two years after the incident — which is when she filed suit. The Los Angeles Police Department still has an open investigation.

The federal judge overseeing the case said he would allow her to remain anonymous until trial. If he kept her identify from the jury, he said it might appear he was protecting her and jurors might assume he believed her and that could hamper Rose's defense.

The Associated Press does not name victims in alleged sexual assault cases unless they ask to be identified.