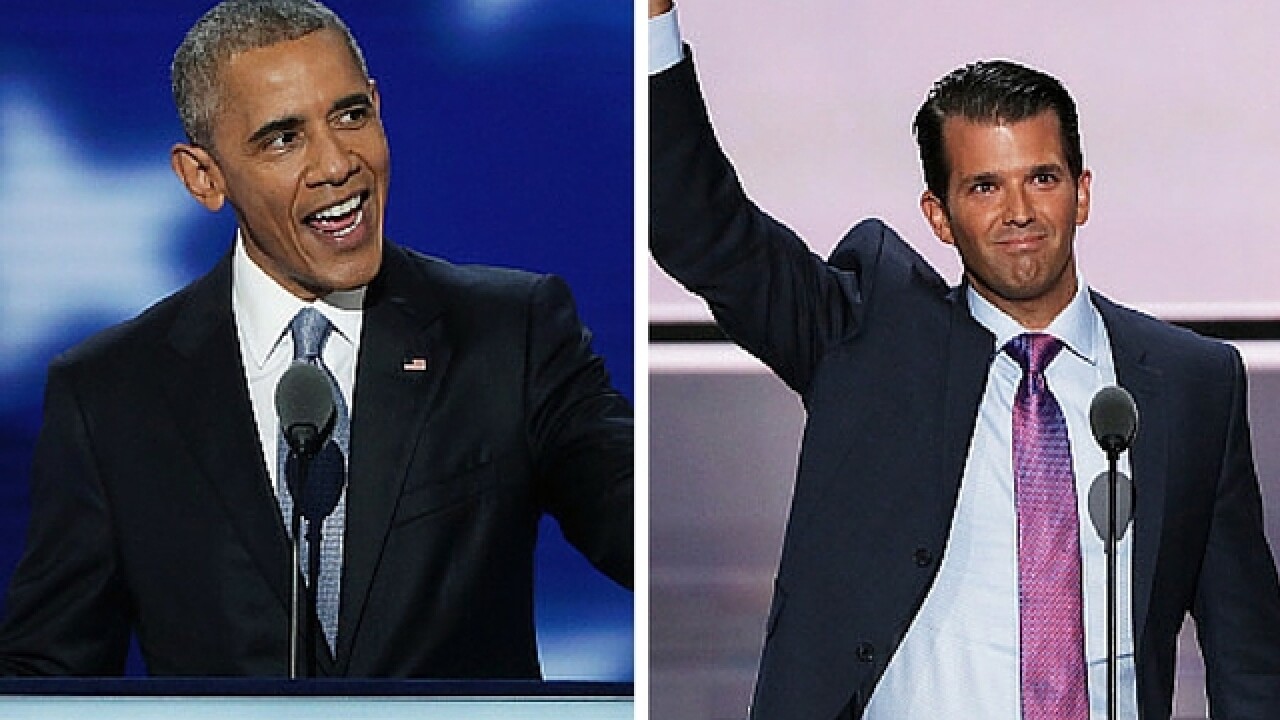 Donald Trump Jr. is claiming that President Barack Obama plagiarized the speech he made at last week’s Republican National Convention.

Trump Jr., the son of Republican nominee Donald Trump, tweeted late Thursday morning, saying he was “honored that POTUS would plagiarize a line from my speech last week. Where’s the outrage?”

I'm honored that POTUS would plagiarize a line from my speech last week. Where's the outrage? #DemsInPhilly https://t.co/sFQ7fblpLh

Trump Jr. linked to a POLITICO tweet, which quoted Obama as saying “That’s not the America I know.”

According to transcripts from the Los Angeles Times and Bustle, both Trump and Obama used the term “That’s not the America I know” in speeches to their respective conventions.

On July 19, Donald Trump Jr. addressed the Republican National Convention in Cleveland. According to Bustle, he said in part (emphasis added).

“There's so much work to do. We will not accept the current state of our country because it's too hard to change. That's not the America I know. We're going to unleash the creative spirit and energy of all Americans. We're going to make our schools the best in the world for every single American of every single ethnicity and background.”

“But what we heard in Cleveland last week wasn’t particularly Republican -- and it sure wasn’t conservative. What we heard was a deeply pessimistic vision of a country where we turn against each other, and turn away from the rest of the world. There were no serious solutions to pressing problems -- just the fanning of resentment, and blame, and anger, and hate.

“And that is not the America I know.”

Though both Trump Jr. and Obama used the same passage in their speeches, NBC News points out that Obama has used the passages in speeches before, dating back to 2010. NBC also cites a speech from George W. Bush delivered in the days following 9/11 that uses the same passage.

Trump Jr.’s claim comes just over a week after his stepmother Melania was accused of plagiarizing part of Michelle Obama’s 2008 speech to the Democratic National Convention. The speech writer, a member of the Trump organization, confirmed that Melania Trump’s speech contained passages inspired by Michelle Obama. She offered her resignation to Trump, who rejected it.