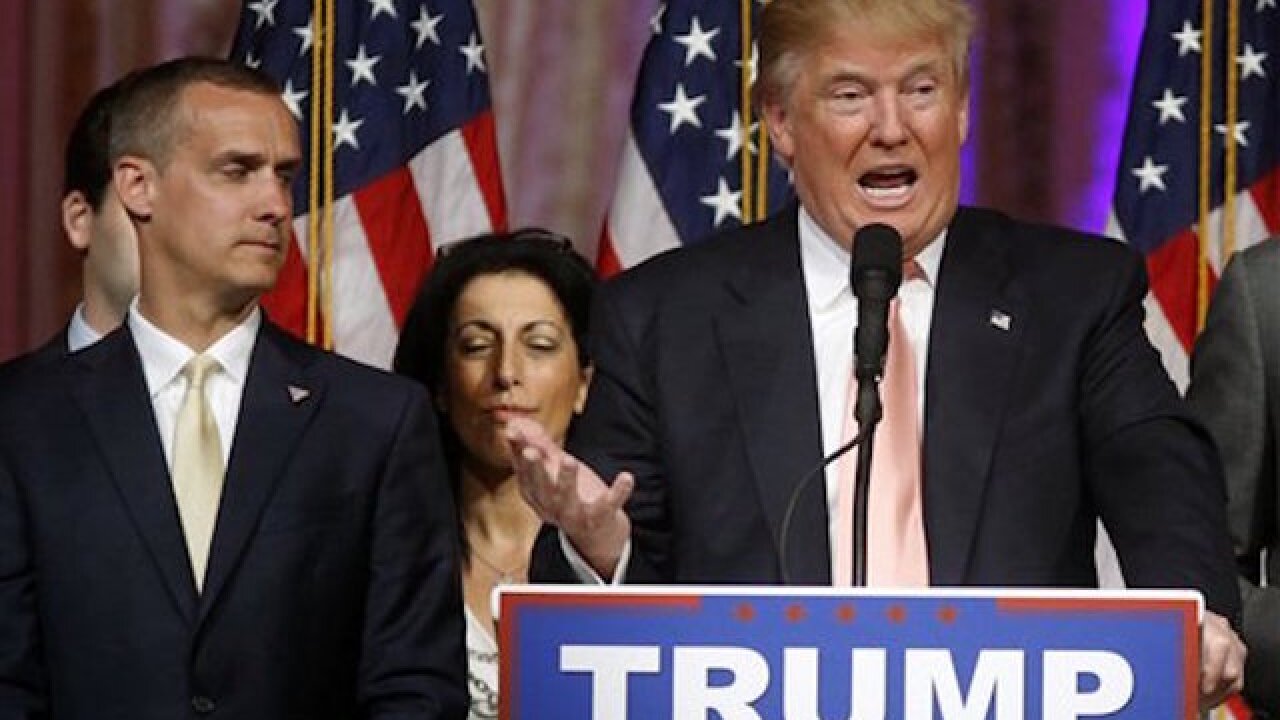 WASHINGTON (AP) — The 2016 presidential race may have descended on Wisconsin — but most of the campaign buzz surrounds an incident that happened nearly a month ago in Florida.

Police there charged Donald Trump's campaign manager with simple battery Tuesday as a videotaped altercation with a reporter transformed what was another messy campaign sideshow into a criminal court summons. Trump decried the charges.

Jupiter, Florida, police determined that probable cause existed to file a criminal complaint against the Republican front-runner's most trusted political adviser, Corey Lewandowski, for an altercation that took place after a campaign appearance earlier in the month. Police on Tuesday morning issued Lewandowski a notice to appear before a judge on May 4 for the misdemeanor charge, which carries up to a year in jail.

The unexpected development injects a court battle into an already contentious Republican primary season just a week before a high-stakes election in Wisconsin. It came on a day that all five presidential contenders campaigned in the state, overshadowing Wisconsin Gov. Scott Walker's endorsement of Ted Cruz and Bernie Sanders' push to narrow Hillary Clinton's delegate lead.

The three Republican presidential candidates, already at odds with one another over issues both political and personal, now say they won't commit to supporting whomever the party chooses as its standard-bearer in the fall campaign, reversing earlier positions that supporting the nominee is necessary for party unity.

"I'm not in the habit of supporting someone who attacks my wife and children," Cruz said, referring to Trump's jabs at his wife, Heidi. Cruz said if Trump were the nominee that would hand the election to Democrat Hillary Clinton.

Kasich said that "if the nominee is somebody that I think is really hurting the country and dividing the country, I can't stand behind them."

Cruz said the incident involving Lewandowski is "the consequence of the culture of the Trump campaign — the abusive culture when you have a campaign that is built on personal insults, on attacks and now physical violence."

Ohio Gov. John Kasich said he "probably would suspend somebody" depending on the evidence available.

Speaking to reporters on his airplane in Wisconsin on Tuesday, Trump vowed to stand by his campaign manager and lashed out at the young female reporter who conveyed the incident to police.

"How do you know those bruises weren't there before?" the New York businessman charged.

"I'm not going to let a person's life be destroyed," Trump said of Lewandowski. "No jury, in my opinion, would convict a man and destroy a man's life over what you witnessed." He repeated that stance Tuesday night during an interview on a CNN-sponsored town hall event in Milwaukee.

Trump took his argument to the Wednesday morning network news shows as well, making reference to video surveillance film of the incident and telling NBC's "Today" show, "What's clear is that she was touching me and she broke through the Secret Service and was asking me questions."

"She wasn't yanked down," Trump said of reporter Michelle Fields, who was working at the time for Breitbart News. "She was hardly even touched. You look at her face ... I mean, her face isn't that of a woman screaming in pain."

Brad Cohen, Lewandowski's lawyer, said "the police report doesn't match the video" of the incident. Interviewed on NBC's TODAY Wednesday, he acknowledged the video "shows contact" between Lewandowski and Field, but said, "I certainly see that she didn't lose her balance. When you watch it in real time, it's literally a half a second."

He noted Lewandowski's background as a former New Hampshire state trooper and said, "If he sees a threat ... or something that's irregular, he thinks he can take action. It's not just a job of the Secret Service."

Police charged Lewandowski after reviewing the video, obtained from security at the Trump-owned property. Police determined the video shows Lewandowski grabbing Fields as she tried to ask Trump a question after a March 8 appearance.

It's unclear what impact, if any, the news will have on Trump's march toward his party's presidential nomination. Critics cast it as another example of why the brash billionaire would struggle to attract women in a prospective race against Clinton, the Democratic front-runner.

"What Donald Trump has been doing over these last months is inciting violent behavior, aggressive behavior that I think is very dangerous and has resulted in attacks on people at his events including this charge that has now been brought against his campaign manager," Clinton said in La Crosse, Wisconsin. "I think ultimately the responsibility is Mr. Trump's."

This story has been corrected to reflect that Brad Cohen appeared on NBC, not ABC Wednesday morning.