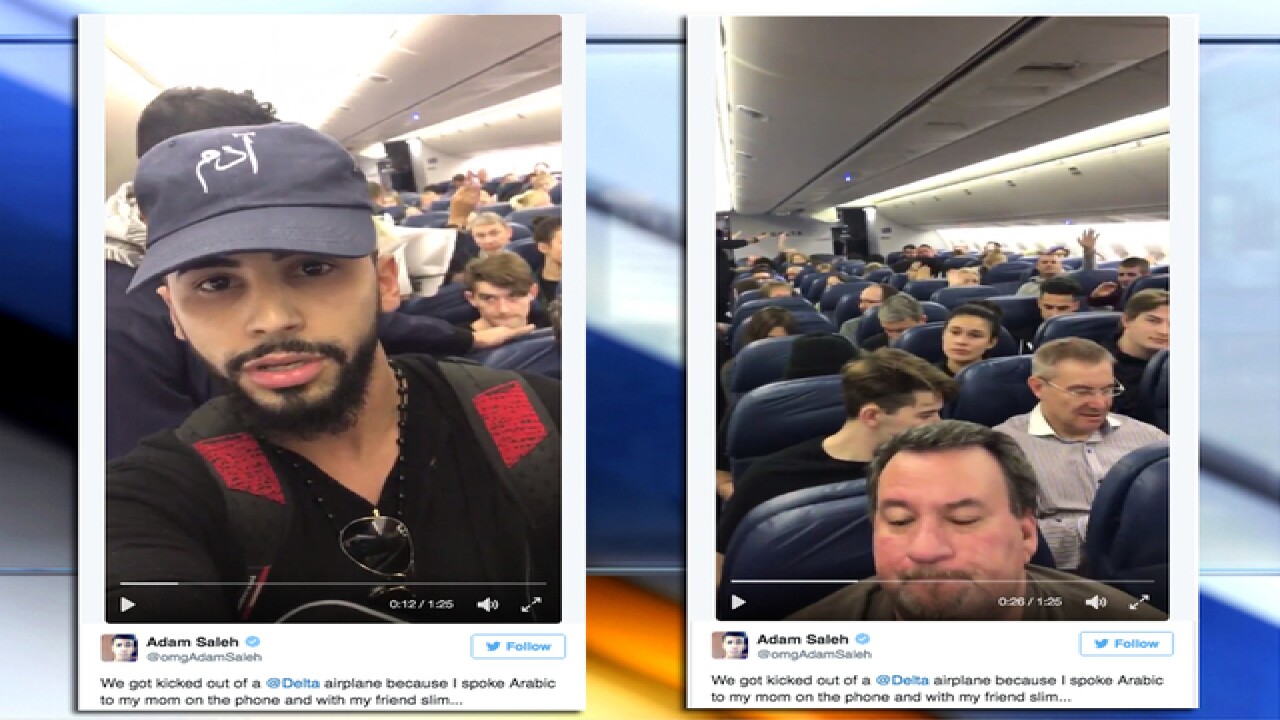 <p>Adam Saleh posted video of the Delta incident on Twitter.</p>

Delta Air Lines removed an Arab-American man and YouTube personality from a flight Wednesday morning after passengers complained the man made them uncomfortable, Delta officials said.

Delta told Buzzfeed News Adam Saleh, 23, and another passenger "were removed from this flight and later rebooked after a disturbance in the cabin resulted in more than 20 customers expressing their discomfort.

"We’re conducting a full review to understand what transpired. We are taking allegations of discrimination very seriously; our culture requires treating others with respect.”

Saleh, whose YouTube videos have millions of fans, posted a video on Twitter claiming he had been “kicked out of” the flight headed from London to New York because he was speaking to his mother in Arabic on the phone.

We got kicked out of a @Delta airplane because I spoke Arabic to my mom on the phone and with my friend slim... WTFFFFFFFF please spread pic.twitter.com/P5dQCE0qos

“This is 2016. Delta airlines is kicking us out,” Saleh said in the video, as passengers in the back of the plane wave at him and say "Bye."

“I’m about to cry right now. Because we said a word in a different language and there’s six white people against us bearded men,” he said, adding he has an account with Delta.

Many on Twitter have expressed skepticism over what happened because Saleh is best known for posting “prank” videos, including one recent airline prank where he pretended to "send" himself to another country.

Lol I'm dying... He got busted again for lying ????? pic.twitter.com/xI5VNROPTO

Some critics of the video point out that the nature of Saleh's videos could mean the video was fabricated.

Another passenger on the Delta flight is seen in the video defending Saleh, asking flight attendants why they were kicking him out.

“That is insane," the passenger says. "That is so crazy — why are you being kicked out?”

Delta contacted the Metropolitan Police in London after removing the men from the flight, Scotland Yard told BuzzFeed News.

In a statement a spokesperson said: “Police were called at approximately 11 a.m. on Wednesday after two passengers were removed from a plane by crew at Heathrow Airport. Officers attended and the passengers were escorted to the terminal where they were assisted with making alternative travel arrangements. They were not arrested and no offenses were disclosed.”

Officials did not specify what Saleh did to make passengers "uncomfortable" but are investigating the incident.