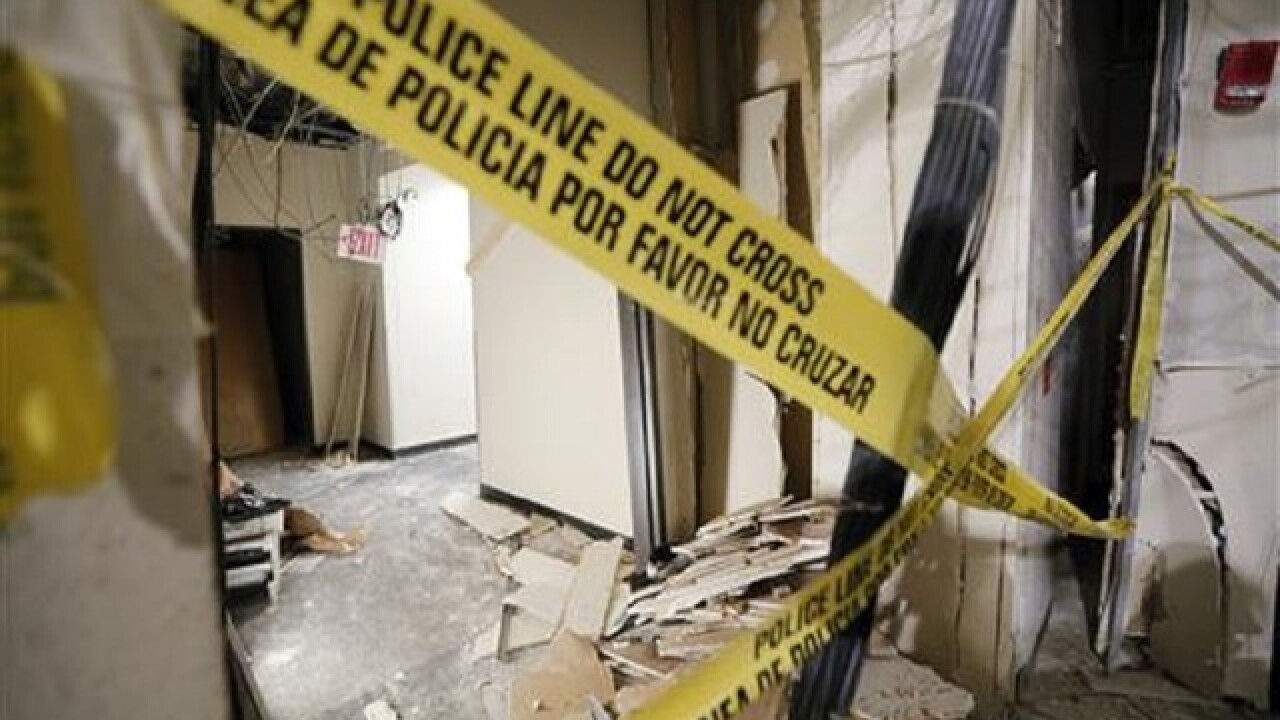 By: Associated Press
Posted at 7:19 PM, Jul 19, 2016
DALLAS (AP) — The blood stains have been removed. So has most of the debris. But some remnants of the blast that ended Micah Johnson's deadly police ambush in Dallas remain at El Centro College: a wall and door frame blown back several feet, and wires and metal dangling from a ceiling with no tiles.
Officials at the downtown community college on Tuesday showed reporters the damage left after Dallas police deployed a remote-controlled robot with about 1 pound of the explosive C4, set it off and killed Johnson early on July 8.
Johnson had opened fire on police officers working at a protest about recent killings by police of black men in Louisiana and Minnesota before making his way into the college. For about 4½ hours, Johnson hid around a corner near the end of a long, narrow hallway of classrooms on the second floor of El Centro's Building B, the college's police chief, Joseph Hannigan, said. From there, Johnson fired about 200 bullets at officers, Hannigan said.
"There's no way for an officer to get in here and make an approach on the subject," he said, standing next to the spot where Johnson's body was found. "That's why the decision was made to do it mechanically."
In all, Johnson fatally shot five officers during the attack and wounded nine others, along with two civilians. Two of the injured were El Centro College officers who encountered Johnson as he tried shooting his way through some campus doors.
Dallas Police Chief David Brown has defended using the robot, saying Johnson had told police negotiators he wanted to kill more officers and had planted explosives.
Johnson, 25, who lived in the Dallas suburb of Mesquite and had served in the Army Reserves, started the ambush around 9 p.m. on July 7. As the peaceful protest neared its conclusion, he pulled up in a black SUV, talked to two Dallas police officers and then shot them, authorities said.
From there, Johnson began moving, seeking cover inside El Centro because he was coming under return fire, Hannigan said. There was no indication Johnson had previously staked out El Centro or made threats against it, he said.
"My personal belief is that he was just going to wing it," Hannigan said. "I don't think he had initial plans to enter El Centro. But I don't think he expected the response we had."
Johnson eventually shot way inside through an entrance on the other side of campus and left a trail of blood leading to a stairwell, Hannigan said. He fired back at officers who followed him into the stairwell and headed to the campus library. He found a window, shot it out and fired down at officers on the street.
Johnson stayed on the move, Hannigan said. He wound his way back around to the other side of the building and about 10 or 11 p.m. ducked inside the doors of the same hallway where the standoff ensued.
"He knew we were coming after him. He knew not to stay in one place for too long," Hannigan said. Asked why he hunkered down in the hallway, Hannigan said, "I don't know if it was intentional that he barricaded himself in that zone or if it was an accident."
Copyright 2016 The Associated Press. All rights reserved. This material may not be published, broadcast, rewritten or redistributed.