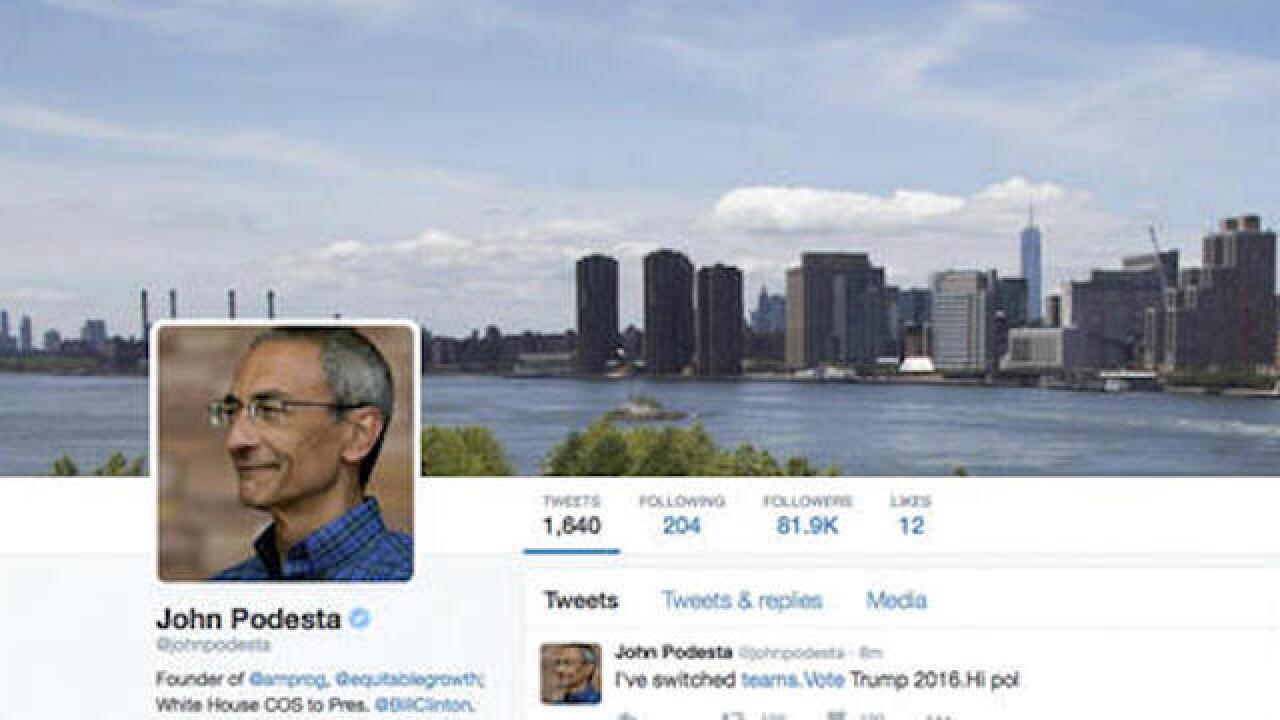 Copyright Associated Press
<p>This is screen image of the website of the Twitter verified account of Hillary Clinton campaign chairman John Podesta. It appeared late Wednesday, Oct. 12, 2016, someone hacked Podesta's verified Twitter account and posted a message saying he had "switched teams" and was supporting Trump. The message was deleted within a few minutes of it appearing. The campaign did not immediately respond to requests to discuss the incident. (Twitter via AP)</p>

WASHINGTON (AP) — As news broke last year about Hillary Clinton's use of a private email server, one of her top aides suggested simply releasing all the messages from her time as secretary of state.

The March 4, 2015, exchange is in the latest batch of emails hacked from the accounts of Clinton campaign chairman John Podesta published Wednesday by WikiLeaks. That was the day The Associated Press first reported that Clinton had been running a private server inside her home in New York.

Within hours of AP's reporting, Republicans from the House Select Committee on Benghazi quickly issued a subpoena demanding Clinton's emails regarding the deadly 2012 attacks on the U.S. diplomatic compound in Libya.

Adviser Phillipe Reines proposed that Clinton should respond by tweet: "No need for this, happy for you to have what I gave State. If they can't, I will. Bring a dolly!" — referring to a moving cart.

Reines, who had worked for Clinton at the State Department, reiterated that he was serious, though he suggested maybe a campaign spokesman could respond less "flippantly."

Mills appeared to like the idea, at least initially. "Can we implement this in the next hour?"

Instead, Clinton's team waited more than one year as the State Department pored through more than 55,000 pages of Clinton's work-related emails from her time as the nation's top diplomat. And the issue kept bubbling up, no matter how hard Clinton's team worked to put it behind her.

The idea of immediately releasing Clinton's work-related emails in March 2015 may have softened her reputation for prizing secrecy over transparency. But it could have also caused her further legal complications.

Sidestepping the State Department's review would have made them available without any review by national security and other government agencies — likely releasing some messages later determined to contain classified material.

Clinton's campaign said the FBI was investigating who hacked Podesta's email. Spokesman Glen Caplin said Wednesday it's "clear" that the hacking of Podesta's email "is the work of the Russian government." He attributed that to the FBI, though the bureau has not said so publicly.

Meanwhile, late Wednesday, it appeared someone hacked Podesta's verified Twitter account and posted a message saying he had "switched teams" and was supporting Trump. The message was deleted within a few minutes of it appearing. "We can confirm that John's Twitter account was hacked, which would explain the message," spokesman Nick Merrill said.

Podesta's hacked messages offer insight into the various strategies and responses considered by those close to Clinton as they grappled with the political fallout from the Democratic presidential nominee's 2009 decision to use the private server.

The day after AP reported the server was inside Clinton's home, Reines notes that Clinton cleared a tweet saying she has asked State to release her emails. When another aide notes the post had already gotten 1,000 retweets, Podesta jokes: "Good to know people go to bed with their Twitter decks. Sex must be obsolete."

On March 9, 2015, Clinton aides debated how to handle the disclosure that in addition to the work-related emails handed over to the State Department she had deleted thousands of emails she claimed were personal.

One of the options discussed included "publication of an embargoed AP story on deletion" that would include a statement from Clinton and a question-and-answer or sit-down interview for television.

Reines wrote that his "strong vote" was for the AP interview, as well as holding a media conference at Gracie Mansion in New York City.

"Get it all done tonight, tight sequencing, no overnight gap between her (statement) and dropping the bomb," Reines wrote, referring to the admission about the email deletions. "Alternatively, put the bomb in her voice in her statement and then nothing else matters."

Instead, Clinton opted to take questions from the press during an event March 10 at the United Nations.

Days before Clinton turned over her personal email server to FBI investigators in August 2015, her aides nervously hashed over how to soften the blow in an official campaign statement about the ongoing controversy.

After top speechwriter Dan Schwerin, communications aide Jennifer Palmieri and policy adviser Jake Sullivan hammered out a draft of the statement, Schwerin passed two alternate versions to Podesta and several other aides, saying they were still uncertain over how to explain Clinton's decision to use a private server instead of a State Department computer for her work-related emails.

Contemplating one hot-button line in which Clinton would admit error in using the server, Schwerin asked "whether we should say 'I messed up' instead of 'this was a screw-up.'"

"What do folks think about that? Other edits we should make? And then what are next steps here?" he added.

Sullivan responded: "I'm very nervous about doing the screw up line by paper. That has to come from her."

In August 2015, longtime Democratic policy adviser Neera Tanden emailed Podesta that Clinton's "inability to just do a national interview and communicate genuine feelings of remorse and regret is now, I fear, becoming a character problem (more so than honesty)."

She needed to apologize, urged Tanden, who is president and CEO of the Center for American Progress, which was founded by Podesta.

"I see no downside in her actually just saying, look, I'm sorry. I think it will take so much air out of this," Tanden wrote.

In an interview with the AP a couple weeks later, Clinton said she did not need to apologize because "what I did was allowed."

The next day, she appeared on national TV and said, "I'm sorry."