ROSCOE, Illinois — Firefighters rescued a scared dog this week after it fell through the ice on a lake in Illinois. The dramatic rescue was caught on video.

The Harlem-Roscoe firefighters arrived on the scene of Legend Lakes in Roscoe to find a dog that had fallen through the ice. The dog owner, seen in the video wearing a yellow jacket, had been trying to use a kayak to get to the dog over the ice.

As the dog owner attempted to rescue his pup, the ice broke beneath him and he fell into the water, his kayak overturning before he reached the dog.

Firefighters were able to successfully rescue of both the owner and the dog.

Lt. Justin Mayton, in a Mustang cold water suit, took another Kayak that was on the scene out to the owner of the dog and the owner was pulled back to the shore. Lt. Mayton continued on to the dog to rescue it and firefighters on shore pulled him and the dog to safety.

PETA has awarded the Harlem-Roscoe firefighters a Compassionate Fire Department Award for their heroic efforts. 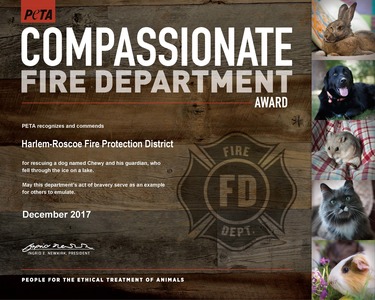 "Thanks to their technical skills and huge hearts, these firefighters quickly saved this dog and his guardian from treacherous icy waters," says PETA Vice President Colleen O'Brien. "The whole department is setting an example of compassion for the world to follow, and PETA is confident that this will be the first of many successful rescues for Lt. Mayton."

The Harlem-Roscoe Fire Protection District will receive the framed certificate, a box of delicious vegan cookies, a letter of congratulations, and a copy of The Engine 2 Diet, and a Texas firefighter's 28-day plan for staying in prime firefighting shape from PETA.