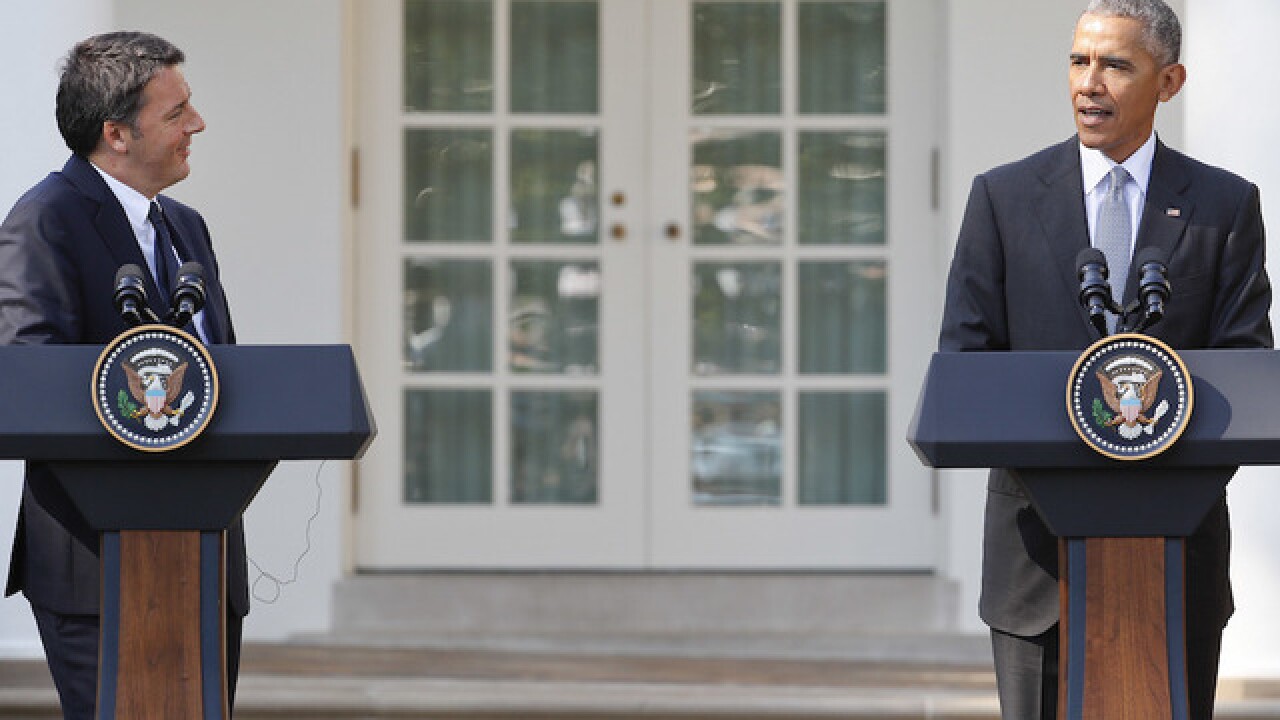 WASHINGTON (AP) — President Barack Obama on Tuesday tore into Donald Trump for sowing suspicion about the integrity of the U.S. election, telling the Republican presidential nominee to "stop whining" and focus on winning votes.

Obama called Trump's intensifying, pre-emptive warnings about voter fraud "unprecedented" in modern politics. The rhetoric is not based on any evidence, Obama said, but is simply aimed at discrediting the election before the first votes are counted.

"You start whining before the game's even over?" Obama said at a press conference. "Then you don't have what it takes to be in this job."

Obama delivered his biting rebuke at White House, where he hosted Italy's Prime Minister Matteo Renzi for a state visit. The president initially said he would pull his punches when it comes to politics, respecting the official setting. But when he was asked about Trump's rhetoric, he did not hold back.

The president also accused Trump of showering praise and modeling his policies on Russian President Vladimir Putin to a degree that is "unprecedented in American politics."

He said is "surprised and troubled" by Republican lawmakers who he said are echoing their presidential nominee's positions on Russia. Trump has praised Putin as a strong leader and criticized Obama and the Democratic presidential nominee, Hillary Clinton, for Washington's deteriorating relationship with Moscow.

In an interview Monday, Trump said Russia "can't stand" either Democrat. Trump promised a closer relationship with Putin, if elected, starting with a possible meeting with Putin before the U.S. inauguration.

The president's remarks come as Trump and his Republican allies are looking for ways to swing momentum their way after a damaging few weeks in the campaign.

Earlier Tuesday, Republicans seized the latest developments in the Clinton email controversy as an issue that could help Trump make up ground in the final presidential debate Wednesday night.

That followed news that the State Department had asked FBI officials to lower the classification of a sensitive email related to the attack on the U.S. compound in Benghazi, Libya. FBI notes released Monday revealed discussion of a "quid pro quo" in trying to get the email reclassified, though it's not clear who first raised the issue and both State and FBI officials deny any bargaining took place.

Obama said Tuesday the version Trump and other Republicans are talking about is "just not true."

Trump called it "one of the great miscarriages of justice" in history.

As the final debate has approached, the GOP candidate has continued his warnings that the election is "rigged," angering not only Democrats but fellow Republicans who worry his claims will hurt public faith in all elections. And as news about the emails hit, Melania Trump made her first public comments about the allegations of sexual assault and misconduct lodged against her husband.

In an interview with Fox News aired Tuesday, Mrs. Trump said she believes the accusations were coordinated by political rivals: "They want to damage the presidency of my husband, and it was all planned, it was all organized from the opposition."

Her comments carried echoes of Clinton's allegations of a "vast right-wing conspiracy" organized to raise similar allegations against her husband two decades ago. Trump notably tried to revive Bill Clinton's history by inviting his accusers to the last debate. His guest list for Wednesday's faceoff in Las Vegas signaled he hoped to change the subject.

The Trump campaign said Tuesday that Pat Smith, whose son, Sean Smith, was killed in the attack in Benghazi, will be attending the debate in Las Vegas as the candidate's guest.

Smith was a featured speaker at the Republican National Convention, where she delivered an emotional speech blaming Clinton for her son's death and accusing her of lying to families about what sparked it.

Clinton planned to spend Tuesday in New York preparing for the debate in Las Vegas. Trump was slated to hold rallies in Colorado.

The disclosure of FBI documents revives questions about Clinton's use of personal email during her time as secretary of state. The issue that has dogged her campaign and damaged voters' trust in her even as she remains the favorite ahead of the Nov. 8 vote.

The declassification of the Benghazi email never took place.

Meanwhile, Clinton is trying to expand her edge over Trump — even in Republican territory. Her campaign announced Monday it was launching a new push in Arizona, including a campaign stop in Phoenix by first lady Michelle Obama, one of Clinton's most effective surrogates.