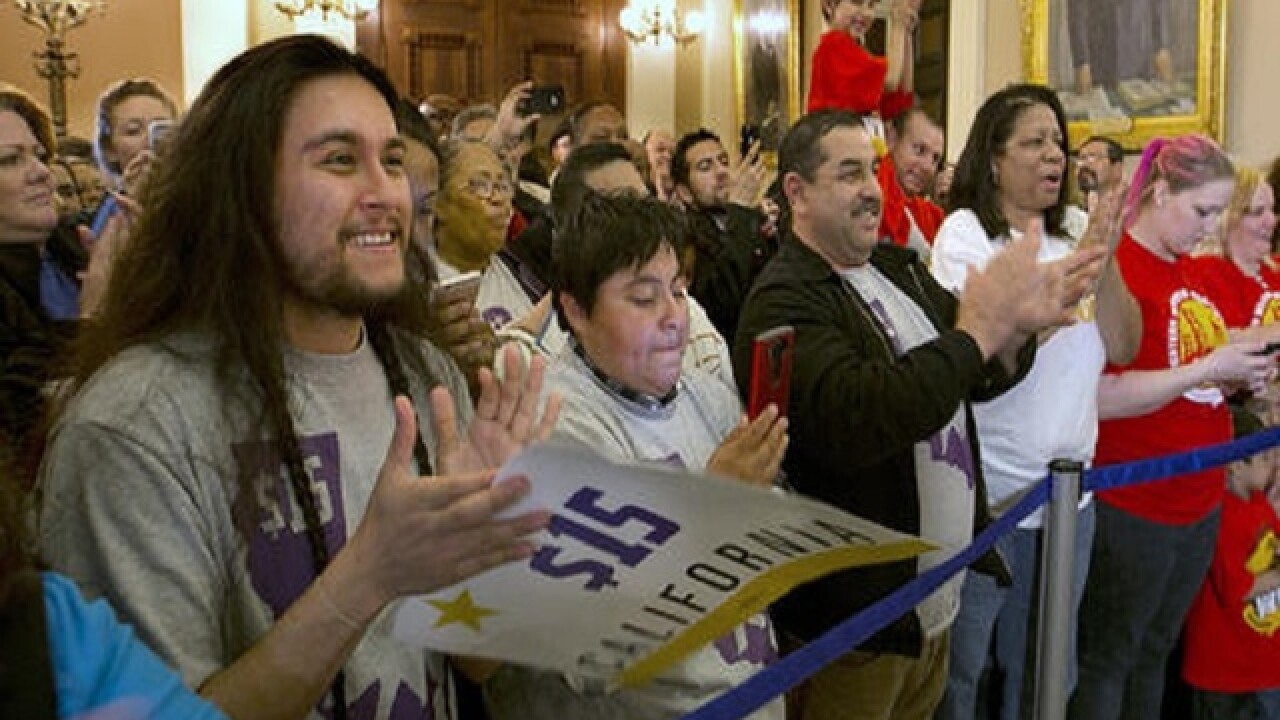 Rich Pedroncelli
<p>Supporters of a bill to raise California's minimum wage, celebrate outside the state Senate Chamber after the measure was approved by the Senate Thursday, March 31, 2016, in Sacramento, Calif. The bill, SB3, that will gradually raise California's minimum wage to a nation leading $15 an hour by 2022, was approved by both houses of the Legislature and sent to Gov. Jerry Brown who said he will sign it. (AP Photo/Rich Pedroncelli)</p>

SACRAMENTO, Calif. (AP) — California and New York are poised to become the highest-paid minimum-wage states in the nation after governors for both reached deals with lawmakers to raise the lowest amount a worker can be paid to a record-shattering $15 an hour.
Gov. Jerry Brown said he will sign California's new minimum-wage bill Monday in Los Angeles after it passed the Legislature on Thursday.
Across the country in New York, Gov. Andrew Cuomo reached a tentative deal late Thursday with his state's top lawmakers to also raise his state's minimum wage to $15.
Minimum Wage by State | InsideGov
The actions in two of the nation's most labor-friendly states come as the income divide has become a key issue across the U.S. in this presidential election year. President Barack Obama, who first proposed an increase to the federal minimum wage in 2013, applauded the states' actions and called on the Republican-controlled Congress to "keep up with the rest of the country."
"California takes a massive leap forward today in the fight to rebalance our nation's economy," said Art Pulaski, executive secretary-treasurer of the California Labor Federation.
California's current $10 an hour minimum wage is tied with Massachusetts for the highest among states. Only Washington, D.C., at $10.50 per hour is higher. New York's minimum wage is $9.
Democrats who control both legislative chambers in California hailed the increase as a boon to more than 2 million workers. Brown, also a Democrat, said it proves the nation's largest state can get things done and help people get ahead.
Republicans, however, echoed fears from business owners and economists that California's annual increases — eventually tied to inflation — will compound the state's image as hostile to business.
Assemblyman Jim Patterson, R-Fresno, said the increase would force small business owners to make layoffs "with tears in their eyes," ultimately resulting in less employment.
The increases would start with a boost from $10 to $10.50 on Jan. 1. Businesses with 25 or fewer employees would have an extra year to comply. Increases of $1 an hour would come every January until 2022. The governor could delay increases in times of budgetary or economic downturns.
The tentative deal reached by New York officials Thursday would be phased in regionally in the nation's fourth-largest state. It would also eventually affect more than 2 million workers.
In New York City, the wage would increase to $15 by the end of 2018, though businesses with fewer than 10 employees would get an extra year. In the New York City suburbs of Long Island and Westchester County, the wage would rise to $15 by the end of 2022. The increases are even more drawn out upstate, where the wage would hit $12.50 in 2021 and then increase to $15 based on an undetermined schedule.
"This minimum wage increase will be of national significance," Cuomo, a Democrat, told reporters Thursday. "It's raising the minimum wage in a way that's responsible."
Cuomo had initially proposed a simpler phase-in: three years in New York City and six years elsewhere. The more gradual, nuanced approach was the result of negotiations with Republicans in the state Senate who worried such a sharp increase would devastate businesses, particularly in the upstate region's more fragile economy.
Brown was previously reluctant to raise California's base wage. He negotiated the deal with labor unions to head off competing labor-backed November ballot initiatives that would have imposed swifter increases without some of the safeguards included in the legislation. Brown now says California's fast-growing economy can absorb the raises without the problems predicted by opponents.
About 2.2 million Californians now earn the minimum wage. The University of California, Berkeley, Center for Labor Research and Education projected the increase would have a ripple effect for those whose wages would increase to keep pace.
The researchers project it would increase pay for 5.6 million Californians by an average of 24 percent. More than a third of the affected workers are parents. Latinos would benefit most because they hold a disproportionate number of low-wage jobs, the researchers said.
The right-leaning American Action Forum countered with its own projection that the increases could cost nearly 700,000 jobs.
The increases are projected to eventually cost California taxpayers an additional $3.6 billion annually for higher government employee pay.
The tentative deal New York officials reached also includes middle-class state income tax cuts starting in 2018. The cut would apply to New Yorkers with incomes between $40,000 and $300,000 and rates that currently range from 6.45 percent to 6.65 percent starting in 2018.
The rates would gradually drop to 5.5 percent by 2025.
Cuomo administration officials estimate the lower tax rates will save more than 4 million filers nearly $6.6 billion in the first four years, with annual savings reaching $4.2 billion by 2025.
Associated Press 2016