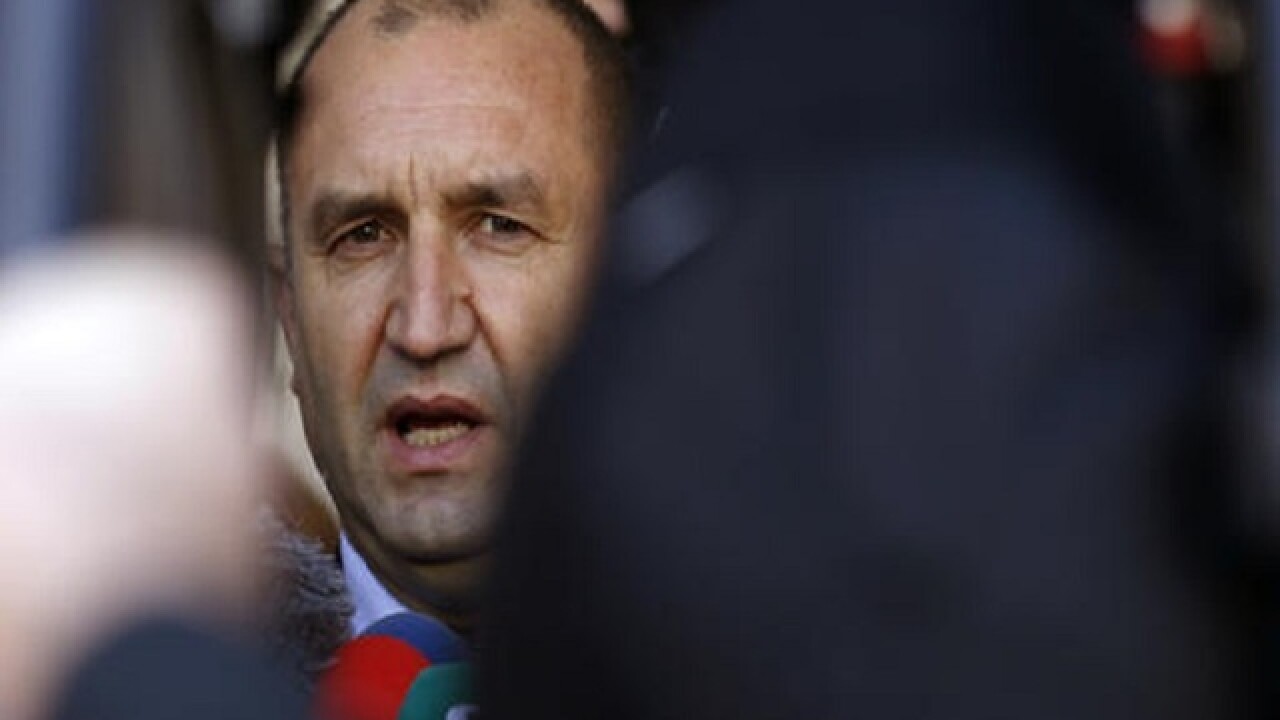 Darko Vojinovic
<p>Bulgarian Socialists Party candidate Gen. Rumen Radev speaks to the media after casting his ballot at a polling station in Sofia, Bulgaria, Sunday, Nov. 13, 2016. Bulgarians are choosing their new president in a hotly contested runoff Sunday that may also determine the fate of the country's center-right government. (AP Photo/Darko Vojinovic)</p>

SOFIA, Bulgaria (AP) — Bulgarian Prime Minister Boiko Borisov announced his resignation after exit polls showed his party losing badly in Sunday's runoff presidential election.
Surveys by several polling organizations showed Gen. Rumen Radev, 53, a former non-partisan chief of Bulgarian Air Force, taking about 58 percent of the vote.
"We accept the will of the people and we congratulate those who have the support of the majority of the voters," Borisov said.
Tsetska Tsacheva, a 58-year-old lawyer and member of Borisov's center-right party, had about 36 percent.
Initial results from the official vote count were expected later on Sunday.
The new president will face a possible rise in migrants from neighboring Turkey and growing tensions between Russia and the West.
In the first round of voting, Radev surprisingly finished first with 25 percent of the vote, followed by Tsacheva with 22 percent.
Bulgaria, which joined the European Union a decade ago, remains the poorest member of the 28-nation bloc. Its 7.2 million people are very much divided in its loyalties.
Bulgaria belongs to NATO and the EU, but many Bulgarians still feel a cultural and historical affinity with Russia, and the country's heavily dependence on Russian energy supplies leaves it vulnerable to political pressure by the Kremlin.
Borisov, whose party has triumphed in all national elections in the last decade, has said he will resign if Tsacheva loses the runoff, opening the way to an early parliamentary election. Halfway into its four-year term, Borisov's coalition government has managed to restore political stability after months of anti-corruption protests, but its popularity has faded due to the slow pace of reforms to eliminate graft and overhaul the judicial system.
A political rookie, Radev has attracted many Bulgarians who are fed up with corrupt politicians. The former NATO fighter pilot who once studied at the U.S. Air War College in Alabama, has pledged to maintain Bulgaria's place in NATO but also says "being pro-European does not mean being anti-Russian."
Tsacheva, seeking to become Bulgaria's first female president, was expected to continue her party's pro-Europe foreign policy. She has tried to rally other right-wing parties behind her, urging them not to allow "Bulgaria to return to the dark past" of being under Russia's thumb.
Copyright 2016 The Associated Press. All rights reserved. This material may not be published, broadcast, rewritten or redistributed.