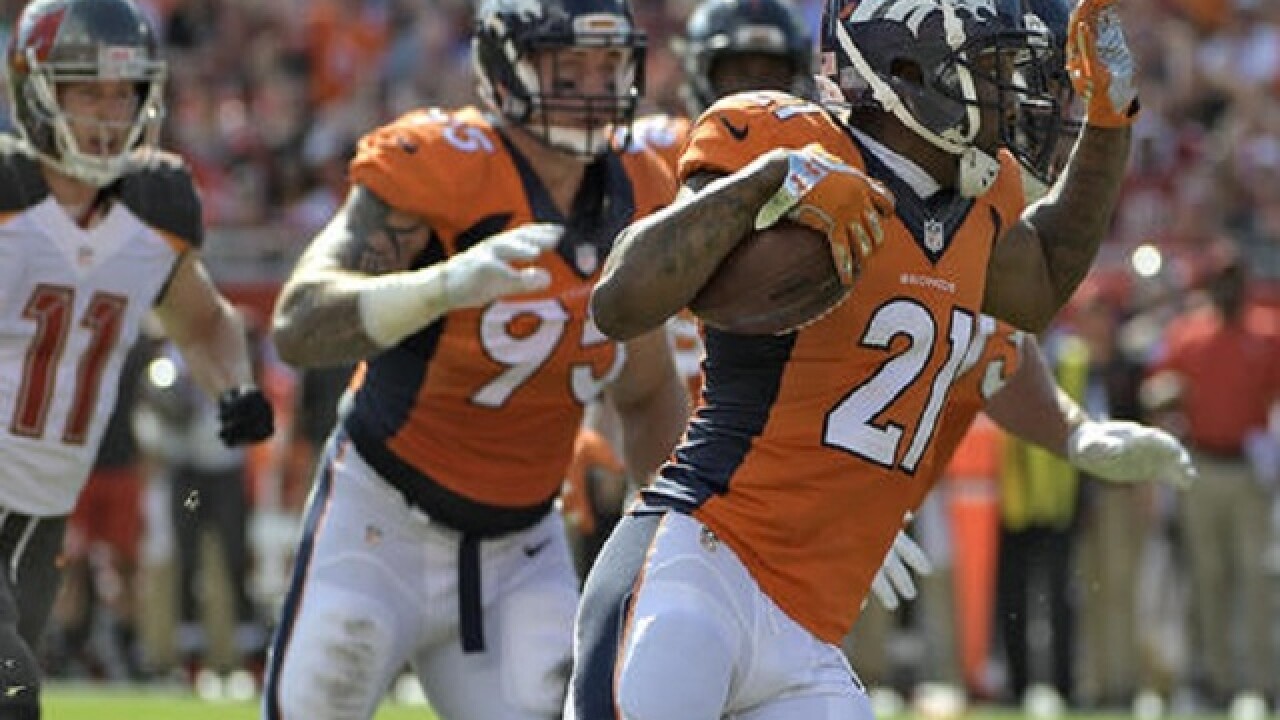 By: Associated Press
Posted at 10:04 PM, Oct 05, 2016
ENGLEWOOD, Colo. (AP) — Aqib Talib swears he's more concerned about the possible punishment Julio Jones could deliver this weekend than any discipline that might await him from NFL commissioner Roger Goodell.
The Denver Broncos star cornerback could still face discipline from the league over the shooting in Dallas last summer in which he admitted accidentally shooting himself in his right leg.
"I'm not really worried about anything except for Atlanta right now," Talib said Wednesday, a day after WFAA-TV in Dallas reported that detectives determined Talib shot himself on June 5, but that he wouldn't face any criminal charges in the case.
"When I heard that report yesterday, I immediately got on my iPad and started watching Julio Jones," Talib said. "I cannot even worry about it. I got my hands full with enough already. Like I said, it's still under review. I'm not really going to talk about that right now."
Dallas police confirmed the report Wednesday evening in a statement, saying Talib's attorney had provided a letter "that stated Aqib Talib admitted he shot himself accidentally." But police said the investigation is ongoing.
Even if he faces no legal consequences in the case, Talib could still be suspended or fined by the NFL, which doesn't require criminal charges or a conviction to mete out player punishment.
NFL spokesman Brian McCarthy told The Associated Press on Wednesday that Talib's case "is under review of the personal conduct policy."
Coach Gary Kubiak said the Broncos are "just moving forward, he's playing great, obviously having a heck of a year and (we're) expecting him to keep going."
Teammates aren't fretting either, suggested cornerback Chris Harris Jr.
"That's a weird situation," Harris said. "You never know what's going to happen. You never know what the NFL's going to do anytime, with any situation. Right now, he's not in jail. So, I mean, what can you do if he didn't go to jail? He didn't do anything wrong."
On Sunday, the Broncos (4-0) host the Falcons (3-1), who are coming off a 48-33 rout of Carolina in which Matt Ryan threw for 503 yards and Jones became just the sixth player in NFL history to post a 300-yard receiving game.
Talib, who was sidelined for three months after suffering a gunshot wound to his right thigh and calf, has started all four of Denver's games and has three interceptions.
That's one shy of his total from 2015 when he earned his third consecutive Pro Bowl berth, but also was suspended for one game for his deliberate eye poke to a Colts tight end, which cost him $323,529.
Talib is making $8.5 million this year and GM John Elway disputed a report last month that the Broncos had talked about trading him.
His off-the-field troubles aside, Talib is a locker room leader with a charismatic personality. Kubiak asked him to address the team last weekend on the eve of his return to Tampa, where he began as career.
"He's always outgoing, always keeps everybody upbeat," said Harris, who also played with Talib at the University of Kansas.
"That's our man, outgoing, talkative. He's just more of a brother. He's always had my back. I'll always have his. He's always been that type of teammate that if you get in trouble or anything, Aqib's going to be right there for you."
Talib, who has had firearm incidents in the past, told Dallas police the night he was shot that he was too intoxicated to recall details of the shooting.
He required stitches but no surgery and missed the Broncos' visit to the White House to celebrate their Super Bowl title.
He's offered few specifics of the shooting, other than to say he feels fortunate to still be playing football and wants to concentrate on helping the Broncos repeat as champions.
Talib returned an interception 46 yards for a touchdown against Andrew Luck in Week 2, his ninth career pick-6 , and his fifth for Denver, a franchise record. Last week, he picked off a pair of passes in his return to Tampa Bay, where he played from 2008-12. Those interceptions set up Denver's first two touchdowns in the Broncos' 27-7 win.
Harris said Talib, whose 33 interceptions are more than any DB in the league since 2008, doesn't appear to be fazed by the specter of impending discipline from the commissioner's office.
"Apparently it's not bothering him at all," Harris said. "So, if it's not bothering him, it's not going to bother us, and we're just going to keep it rolling."
Copyright 2016 The Associated Press. All rights reserved. This material may not be published, broadcast, rewritten or redistributed.