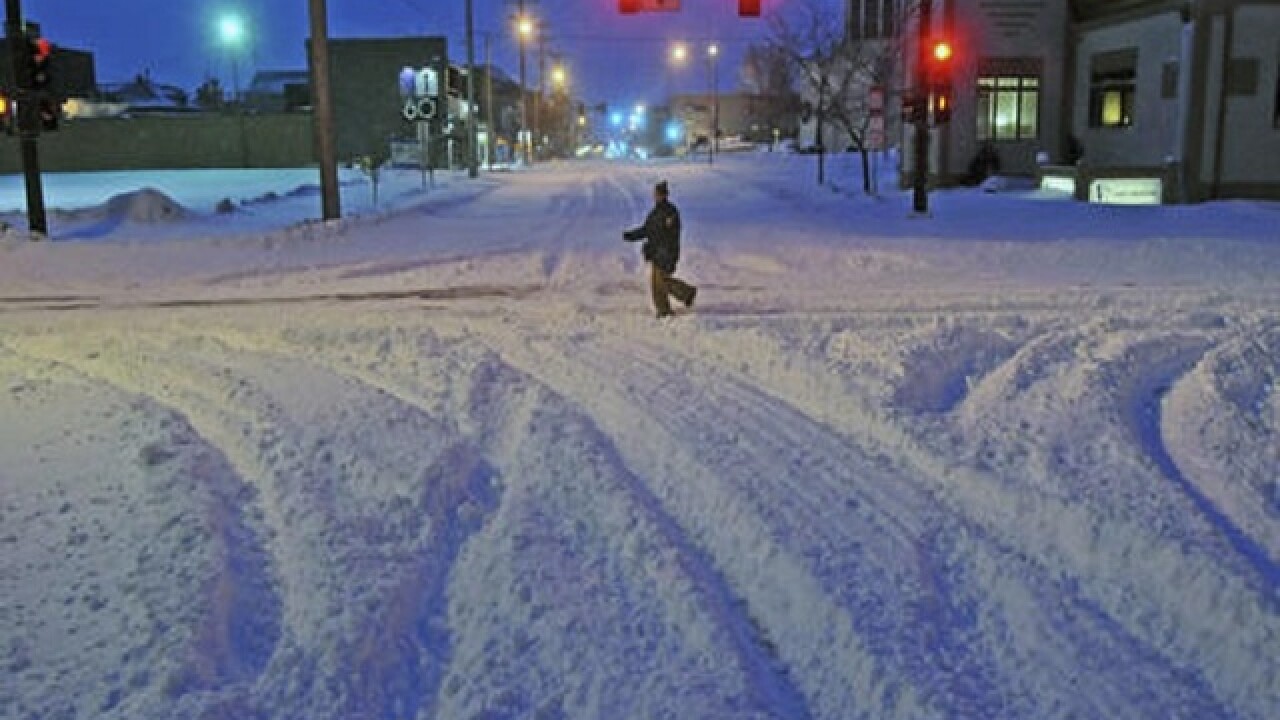 CHICAGO (AP) — Travel conditions remained hazardous as a winter storm swept across much of the northern Great Plains Monday, with blowing and drifting snow forcing the closure of an airport and creating near-zero visibility on some roads.
The combination of freezing rain, snow and high winds that forced the shutdown Sunday of vast stretches of highways in the Dakotas continued into Monday, and authorities issued no-travel warnings for much of North Dakota.
The National Weather Service in Bismarck, North Dakota, said a blizzard warning would remain in effect for most of the state into Monday afternoon or early evening. Severe whiteout conditions led to the closure of Minot International Airport, and the facility wasn't expected to reopen until 3 a.m. Tuesday. The airports serving Fargo and Bismarck also list flight cancellations on their websites.
Winds gusting 40 mph to 50 mph associated with the storm in Minnesota also led to delays and cancellations at Minneapolis-St. Paul International Airport.
The storm also has caused power outages in the Dakotas and Nebraska.
The South Dakota Rural Electric Association said roughly 19,000 of its customers were without power Monday afternoon, up from 12,000 in the morning. In Nebraska, winds gusting up to 70 mph were cited for hundreds of power outages in central and eastern portions of the state on Sunday, although by Monday morning utilities reported that power had been restored to most customers.
The North Dakota Transportation Department closed most of a 240-mile stretch of Interstate 94 Sunday night, from the Montana border to Jamestown. That stretch remained closed Monday. Portions of U.S. Highways 2, 52 and 281 were also closed because of snow, ice and "near zero visibility." Motorists who drive past the roadblocks can be fined up to $250.
No-travel advisories were issued for much of North Dakota, including the Williston, Dickinson, Minot, Bismarck, Jamestown, Valley City and Grand Forks areas.
Authorities in South Dakota shut down Interstate 90 from the Wyoming border to Chamberlain — a distance of about 260 miles. And the Rapid City Fire Department sent out its special tracked vehicle for the first time this season to help stranded motorists east of Rapid City.
Copyright 2016 The Associated Press. All rights reserved. This material may not be published, broadcast, rewritten or redistributed.