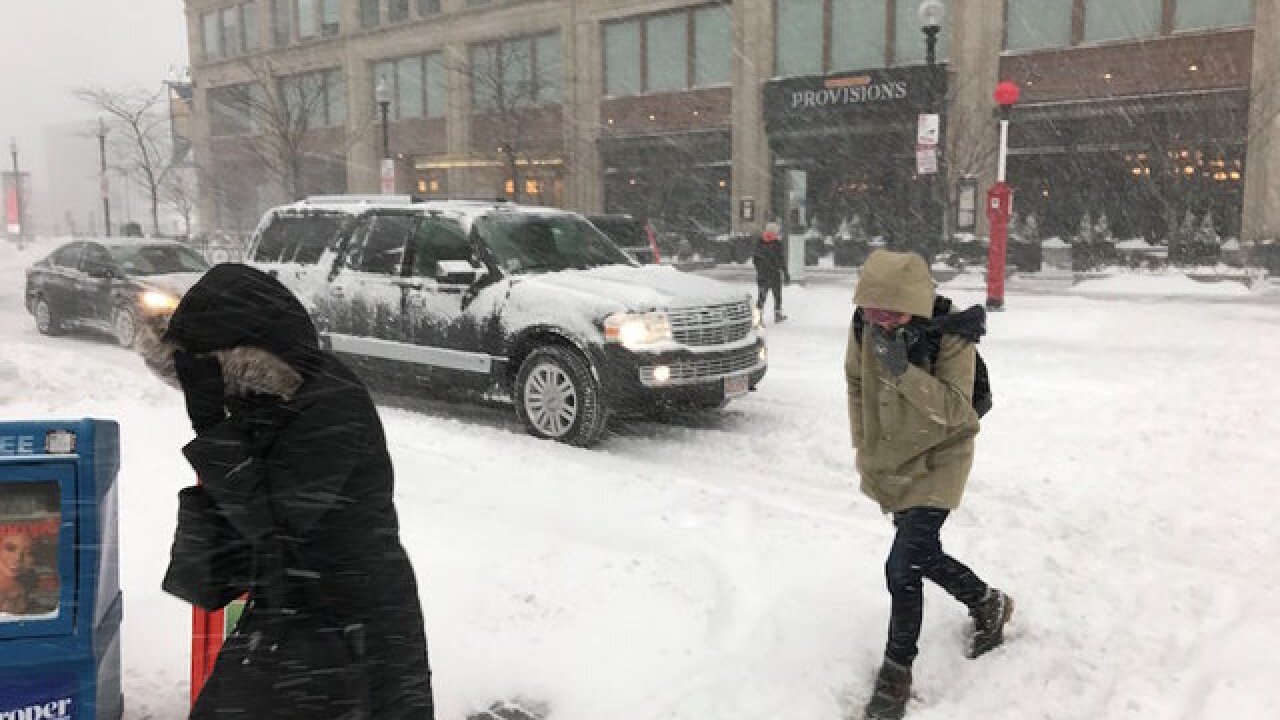 © 2017 Cable News Network, Inc.
Ann Roche/CNN
<p>The Northeast hunkered down Thursday for what looks to be the most significant storm of the season, with as much as a foot of snow of expected in some places as well as blizzard conditions. The city of Boston is pictured here covered in snow.</p>

The Northeast was slammed Thursday with what appeared to be the most significant storm of the winter, with blizzard conditions and as much as a foot of snow in some places.

The first snow-related death was reported in New York on Thursday when a doorman shoveling snow on the Upper East Side died after slipping and falling through a glass window, New York police said.

Miguel Gonzalez, 59, of Bridgeport, Connecticut, sustained cuts to his neck and face. He pronounced dead at Metropolitan Hospital Center, according to police.

New York, Boston and Philadelphia closed their public schools for the day. New York said it would reopen its school system Friday.

All state offices in New Jersey were closed for nonessential personnel.

Airlines had canceled more than 1,800 flights along the storm path as of mid-afternoon Thursday, according to FlightAware. Most of those were at the Newark, New Jersey; Boston; and New York's LaGuardia and John F. Kennedy International airports.

Winter storm warnings were in effect, stretching from Pennsylvania through parts of New York, New Jersey and New England.

Majid Padellan ventured outside for a smoke break in Brooklyn around 1 p.m., and he said the biggest thing he noticed was the "brutal" wind.

"The wind is howling. It's pretty bad," he told CNN in a phone interview. "The snow is blowing in every which direction. It's still pretty fierce."

The good news is that the storm is expected to move out quickly. New York Mayor Bill de Blasio said snow is expected to stop by early evening Thursday.

However, snowfall in Boston could continue into the weekend, and temperatures won't rise above freezing there until Sunday, according to the National Weather Service.

Philadelphia mostly "dodged a bullet," Mayor Jim Kenney said, as the city received a couple of inches of snow.

Trouble on the roadways

With whiteout conditions and snowy, icy roads, officials urged residents not to drive. In Suffolk County, New York, bus service was not operating for the day. In New York City, subways and buses were running with few delays, de Blasio said.

Officials said they had not made a decision on whether to shut the Long Island Expressway, the main roadway on the island.

New Jersey State Police spokesman Sgt. Jeff Flynn told CNN that his department has responded to about 200 reported crashes, but none have been serious or fatal.

A video from Manhattan shows the dangerous conditions, with buses becoming stuck in the streets and snarling traffic.

"Don't go out if you don't have to," de Blasio said. "If you need to go out, please don't use your car because we need to let our Sanitation Department clear the roads."

One person who did not heed officials' warnings: Martha Stewart.

In Manhattan, one neighbor said storm victim Gonzalez was known as "Uncle Mickey." Working as a doorman, he was a fixture in the neighborhood and would greet passersby, and their dogs, too, the neighbor, Denice Rich, told reporters.

She called Gonzalez "a kind soul," who was friendly and sweet.

"My heart is breaking for his family," she said. "What a strange accident. It's a horrible thing."

Boston Mayor Martin Walsh also said the city's public school system would be shut Thursday, and he urged people to be "looking out for your elderly neighbors, disabled neighbors, neighbors who might not be able to help themselves." Boston has 125 public schools with about 56,000 students.

The School District of Philadelphia, which has 134,041 students, was also closed for the day. But Philadelphia schools will be open Friday, officials said.

Connecticut Gov. Dannel Malloy said state colleges and courts would be closed. "This is a serious challenge when you talk about 8 to 14 inches" of snow, he said.

Several colleges in the Northeast including all City University of New York colleges, Rutgers University in New Jersey and MIT in Massachusetts were closed Thursday.

Don't call it a nor'easter

The storm was expected to pack a punch, but it's not a nor'easter.

Nor'easters get their name from the winds that blow from the northeast ahead of a storm's arrival as it moves up the Eastern Seaboard, remaining offshore.

This storm is moving from west to east, from land out to sea, so it can't be classified as a nor'easter.

The region had a nor'easter on January 24 that jammed roads and caused major disruptions in air travel.

Up and down temps

New Yorkers may be experiencing a bit of "weather whiplash" after enjoying sunny, warm weather a day earlier.

But the mild conditions were short-lived as temperatures plummeted overnight, paving the way for snow.