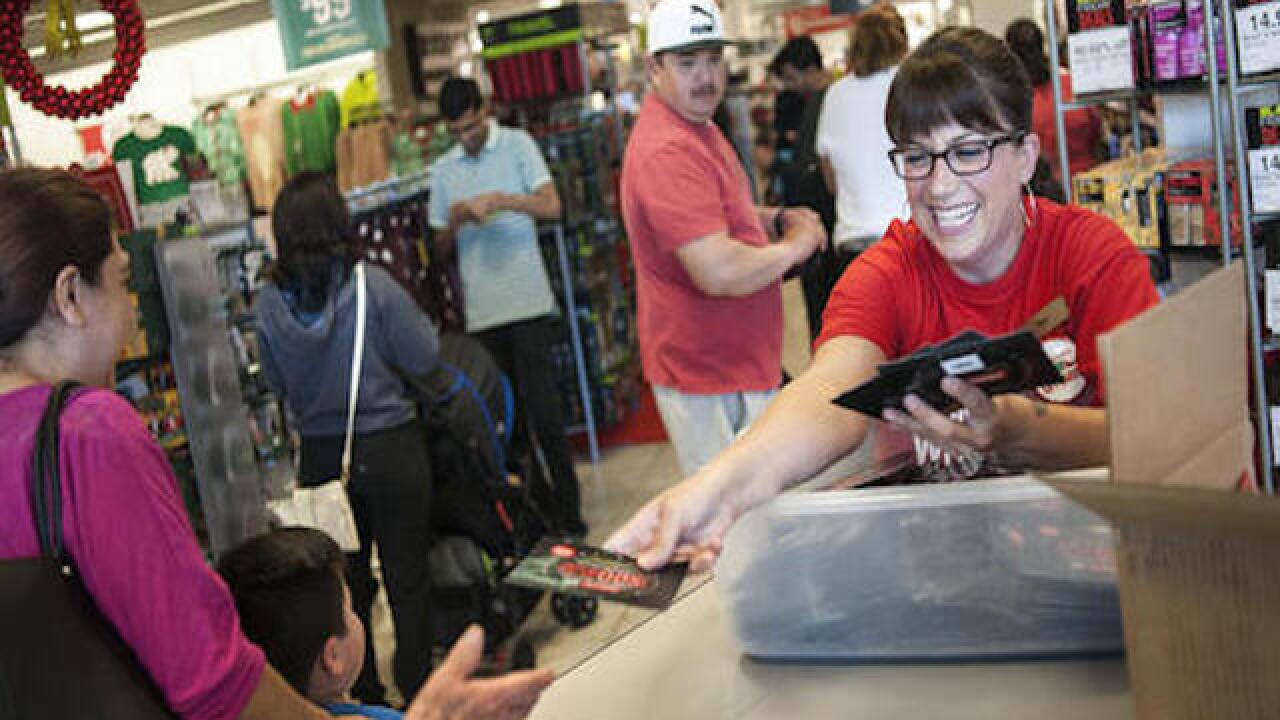 NEW YORK (AP) — Shoppers were on the hunt for deals and were at the stores for entertainment Friday as malls opened for what is still one of the busiest days of the year, even as the start of the holiday season edges ever earlier.

Julie Singewald's Black Friday started at 4 a.m. at a Twin Cities outlet mall. By 6 a.m., she and her two teenage daughters made it to the Mall of America in Bloomington, Minnesota. Singewald said she was merely the vehicle — "and sometimes the credit card" — as her daughters hunted for deals and worked on their shopping lists. Increasingly, the 44-year-old is doing more of her shopping online.

"I'm a point-and-click person," she said. "If it were up to me, I would be in my pajamas and on my computer at home."

Black Friday, the day after Thanksgiving, used to launch the holiday season, but the competition to grab customers first is keen. Stores like Macy's, Walmart, Target and more were open Thursday evening in what they hope will be a new holiday tradition as they try to fight off competition from online juggernaut Amazon.

After what appeared to be a strong turnout for Thanksgiving sales, some early morning reports indicate that traffic to malls may be slower on Black Friday than last year as retailers spread the deals out throughout the week.

"It was a really good start. But I have never seen Black Friday morning so calm," said Marshal Cohen, chief industry analyst at NPD Group, a market research firm, who visited malls on Long Island on Friday. He still believes the weekend's sales will likely be up over last year because shoppers did lots of buying, including pricey flat-screen TVs.

In Rhode Island, shoppers who arrived after sunrise at the Garden City outdoor shopping mall in Cranston said they were glad their state — along with Massachusetts and Maine — doesn't let retailers open on Thanksgiving Day.

"I don't like the idea of it," said Lauren Glynn. "I feel bad for the people who have to work."

She and her husband, who are restaurateurs, came to the Cranston mall for fun, to soak up the experience and maybe find a few deals, but they said they plan to do most of their gift shopping online and at locally owned shops where they live in Bristol, Rhode Island.

Sam Glynn said it's at local shops where they will look for "cool knives and glassware, things that have meaning."

Wal-Mart Stores Inc., which started its Black Friday sales on Thursday at 6 p.m., said shoppers were embracing technology products. Steve Bratspies, chief merchandising officer at Wal-Mart's U.S. division, said in addition to Black Friday favorites like televisions and toys, they were looking for drones, virtual reality products and hoverboards. Wal-Mart started its online sale just after midnight on Thanksgiving, three hours earlier than last year. It reported on Friday that 70 percent of the traffic to its website came from mobile devices.

Leah Olson was at Mall of America Friday morning, following some Thanksgiving night trips to Target and a local mall. Olsen said she had done some online shopping, but preferred making in-person stops.

"I always like to walk, go to the mall," said the Chanhassen, Minnesota resident. "I just like shopping."

This weekend is crucial to set the tone for the holiday season. Around 137 million people plan to or are considering doing their shopping during the Thanksgiving weekend, according to a survey conducted for the National Retail Federation. That includes online and store shopping. Black Friday, the day after Thanksgiving, vies with the Saturday before Christmas as the busiest shopping day of the year.

The NRF, the nation's largest retail group, expects holiday sales to rise 3.6 percent for November and December, better than the 3 percent growth seen for those months last year. That excludes car sales, gas and restaurant receipts. But it includes online spending and other non-store sales such as catalog spending.