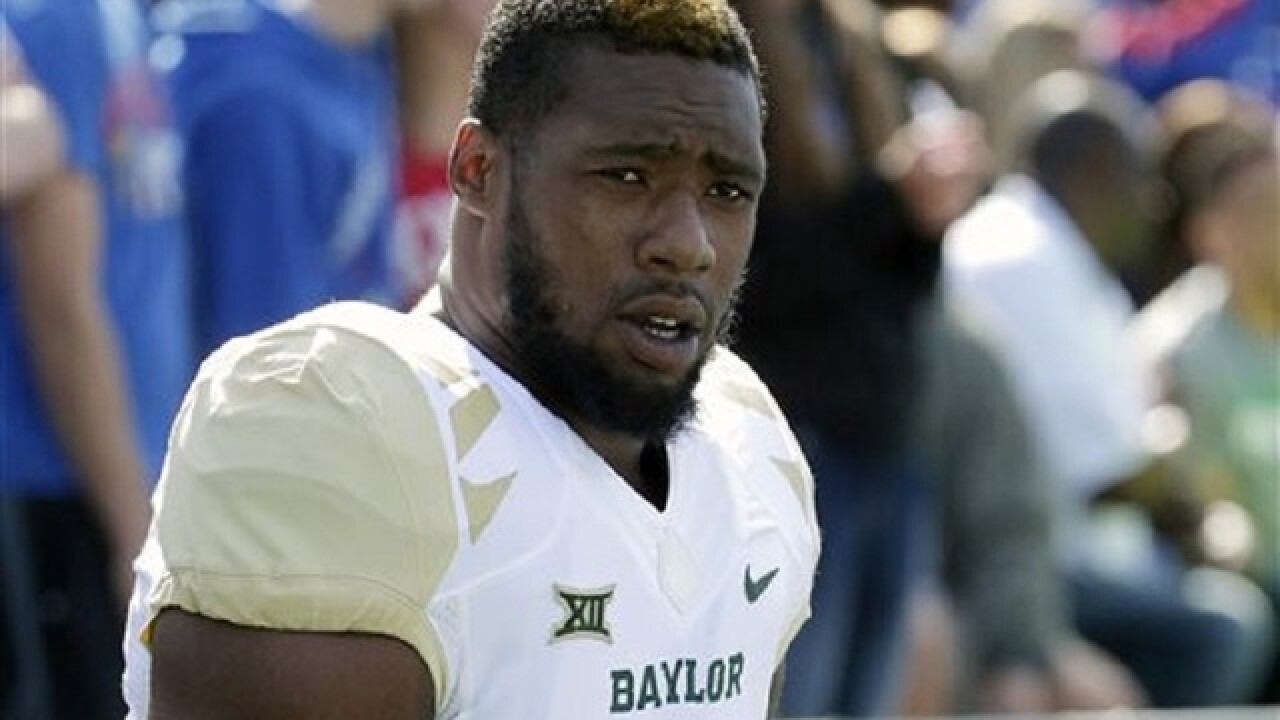 By: Associated Press
Posted at 5:59 PM, Apr 13, 2016
AUSTIN, Texas (AP) — NFL prospect and former Baylor football player Shawn Oakman was arrested Wednesday on a charge of sexually assaulting a woman at his Texas apartment earlier this month, Waco police said Wednesday.
The arrest of the record-setting defensive end is the latest troubling incident for the Baylor football program. Two former players were convicted of sexual assault in 2014 and 2015, and the school faces a federal lawsuit from one of the victims claiming the school didn't protect her.
A woman told police that Oakman, 24, attacked her April 3 after they met at a Waco nightclub. According to a police affidavit, Oakman told investigating officers they had consensual sex.
In a statement announcing the arrest, police also said they served two search warrants for Oakman's cellphone and his DNA while questioning him Wednesday afternoon.
Baylor's career sacks leader finished his college eligibility in December.
Oakman's agent did not immediately respond to requests for comment on the arrest. Attorney information for Oakman was not immediately available. Waco police did not immediately respond to messages seeking comment beyond the written statement.
The woman told police she walked with Oakman to his apartment after meeting him at the club and he attacked her in his bedroom. According to a police affidavit, the woman said she was able to leave the apartment after she was assaulted.
The affidavit says the woman was "treated for her injuries" at a medical center, where a sexual assault examination was performed. Investigators searched the apartment several hours later.
Baylor, the largest Baptist university in the country, faces a federal lawsuit and questions over whether it failed to act effectively against football players accused of sexual assault. A former student accused the university of deliberate indifference in its handling of her complaints about one player, Tevin Elliott, who was eventually charged and convicted in 2014 of two counts of sexual assault. He was sentenced to 20 years in prison.
A year later, a jury ruled that another Baylor football player, Sam Ukwuachu, assaulted a former Baylor women's soccer player; he received a six-month jail sentence.
Officials have declined to address specific allegations, though President and Chancellor Ken Starr has decried the "scourge of sexual violence." In February, the school announced a $5 million commitment to improve its response to sexual assault and said it would add another investigator and an administrative assistant to the school's Title IX office, which enforces compliance with anti-gender discrimination rules and will investigate claims of sexual assault on campus.
Oakman, a Philadelphia native, came to Baylor after being kicked off the football team at Penn State.
According to the Houston Chronicle, Oakman, who was already facing trouble with Penn State coaches, tried to take a sandwich and fruit juice without paying, then grabbed the wrist of a clerk who attempted to stop him.
"I was mad at myself. It was my fault," Oakman told the newspaper. "I let myself and my family down."
Oakman had 128 tackles and 17.5 sacks in three years at Baylor. He was suspended for the 2015 season opener for an unspecified rules violation, but told the newspaper in January he had matured and was ready for the NFL.
Associated Press 2016