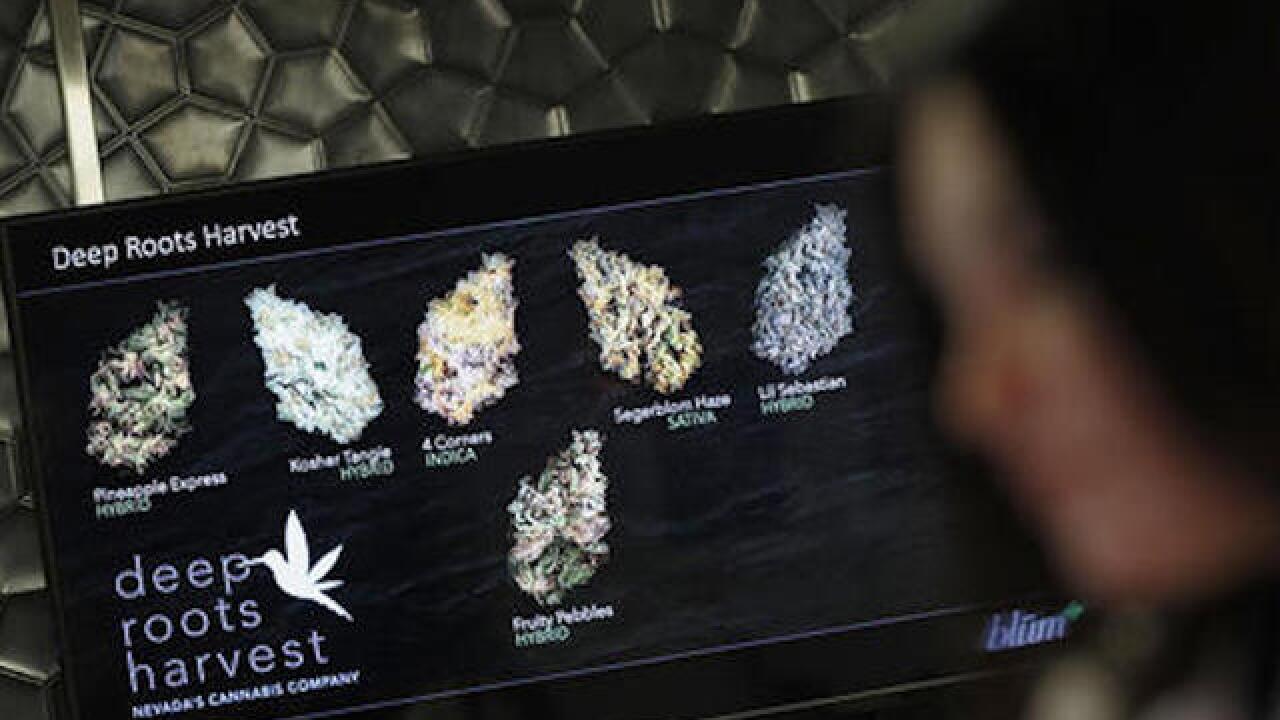 Copyright Associated Press
John Locher
<p>In this, Oct. 27, 2016, photo, a monitor displays different types of marijuana for sale at Blum in Las Vegas. Entrepreneurs behind an effort to legalize recreational pot in Nevada hope they can bring cannabis to the mainstream of Las Vegas tourism, but they’ll first have to get past a casino industry that’s given marijuana the cold shoulder. (AP Photo/John Locher)</p>

LAS VEGAS (AP) — Nevada already has legal brothels, round-the-clock casinos and a coy catchphrase declaring that "what happens in Vegas, stays in Vegas." If voters approve, the state could soon add another vice in the form of recreational marijuana.

A proposal on the Nov. 8 state ballot would legalize pot, and entrepreneurs hope its passage could someday allow the drug at Las Vegas' glamorous nightclubs and perhaps provide the framework for a future Amsterdam-style cannabis district.

"I really think this would be the third-largest market in the country," said Derek Peterson, whose company operates marijuana dispensaries called Blum. He predicts that only California and New York would offer a bigger customer base than Las Vegas and its 42 million tourists a year. "I think it should be able to fit in really well with the whole dayclub/nightclub thing."

Nevada has allowed medical marijuana since 2000, and Peterson sees recreational pot as an alternative for visitors tired of cocktails that can top $15 apiece and inflict hangovers. But before waitresses begin delivering high-grade marijuana at clubs along the Las Vegas Strip, weed proponents will have to win over not just voters, who narrowly support the initiative in polls, but a risk-averse casino industry.

The Nevada Resort Association came out against the measure, pointing to an opinion from gambling regulators that casino owners should avoid the marijuana industry because the substance remains illegal under federal law. Las Vegas Sands owner Sheldon Adelson has bankrolled most of the opposition, pouring $2 million of his fortune into a campaign that raises the possibility that small children could become intoxicated from candy-like marijuana edibles.

In spite of its libertine reputation, the rigorously regulated casino industry is known to err on the conservative side to avoid scandalizing the middle-aged tourists who are its bread and butter.

"I don't know that this is a game changer in terms of tourism," Virginia Valentine, president of the Nevada Resort Association, said of marijuana's potential. "We're really known for other things. You may attract people or turn them off."

The Las Vegas Convention and Visitors Authority, which promotes Sin City's amenities to the world, is neutral on the issue.

There's no solid state-sponsored research on how legal recreational marijuana has affected tourism in places that have legalized it, although both sides point to Colorado to make their case.

Pro-marijuana interests cite a state study that found Colorado set an all-time tourism record in 2015, capping a fifth year of growth. It's unclear how much of that is due to weed, and how much can be chalked up to other factors, such as good snow in recent years relative to competing ski states.

Marijuana opponents refer to a report from the Visit Denver tourism bureau that logged increasing complaints about panhandling and open marijuana consumption in the city's downtown corridor.

"Denver is losing visitors and valuable convention business as a result of these overall safety (or perception of safety) issues," the report said. "We fear not being able to brand Denver away from this growing reputation."

Nevada's ballot initiative would not allow municipalities to put blanket bans on marijuana, as Colorado does. But it would bar consumption in buildings that are open to the public and permit local governments to restrict the locations of marijuana dispensaries and related businesses. It effectively blocks people from growing their own by banning the practice within 25 miles of a licensed marijuana store.

Some of those provisions could be changed three years after passage. But even political leaders who are open to legalization say the embrace will not be immediate if voters approve the measure.

"I think it will be as much of a challenge for us as it will be a boon for us, because there's no place in the world like Vegas," said Democratic Rep. Dina Titus, whose urban district includes the Strip. "I think it's going to take a while to work it out."

Meanwhile, a Nevada lawmaker who has always pushed the envelope on marijuana says he's requested a bill next spring that would allow Amsterdam-style pot coffeeshops and other places dedicated to public consumption. Democratic state Sen. Tick Segerblom envisions a pedestrian-centric outdoor entertainment district focused on giving visitors a new kind of "only-in-Vegas" experience centered around pot.