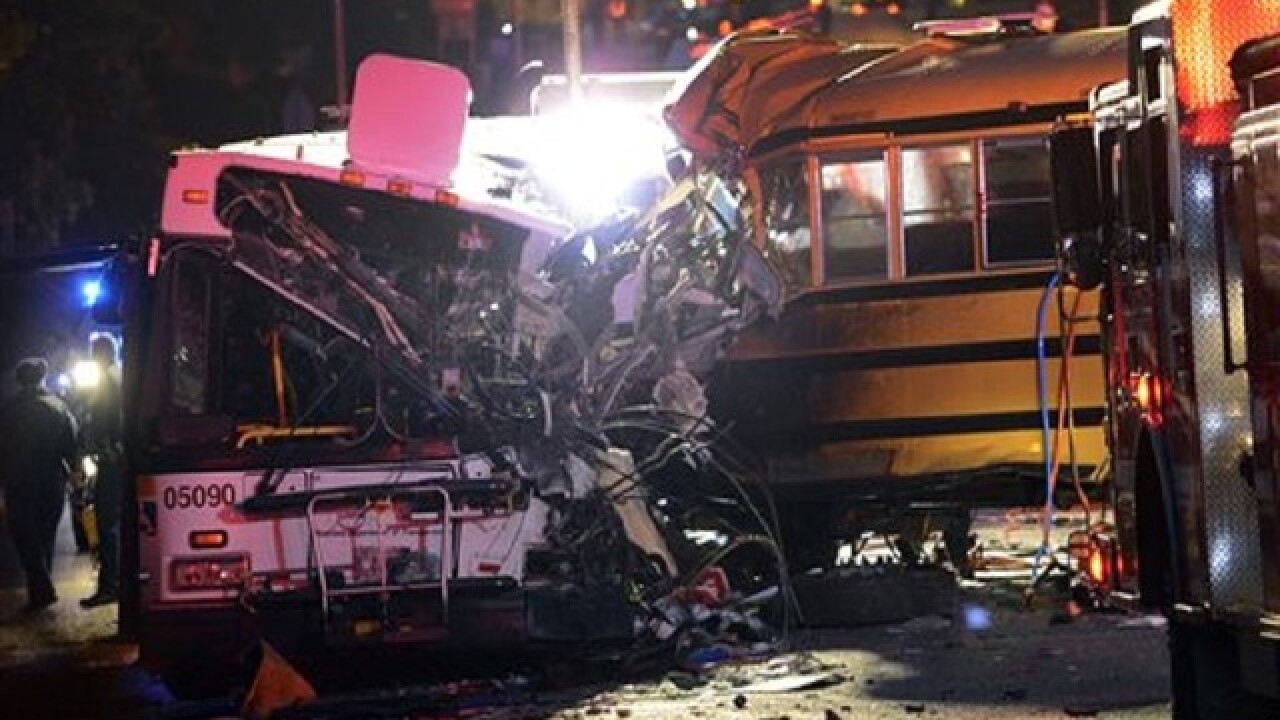 Jeffrey F. Bill
<p>Fire department and rescue officials are at the scene of an early morning fatal collision between a school bus and a commuter bus Tuesday, Nov. 1, 2016, in Baltimore. (Jeffrey F. Bill/Baltimore Sun via AP)</p>

BALTIMORE (AP) — Investigators hope an autopsy, a survivor and recording equipment will help explain why a school bus slammed into a commuter bus in Baltimore, killing both drivers and four public transit passengers.
The school bus was a few blocks from its first stop in pre-dawn darkness Tuesday when it hit a cemetery wall, rear-ended a car and then ricocheted off a roadside pillar into the oncoming Maryland Transit Administration bus, police said.
Baltimore police spokesman T.J. Smith said the only school bus passenger, an aide, survived with minor injuries, making her the nearest eyewitness to the 67-year-old school bus driver.
"We're in the process of interviewing" her, Smith said.
An autopsy may determine if the school bus driver suffered a medical emergency, which Smith called a working theory, since there were no skid marks indicating hard braking.
Investigators recovered recording equipment from one of the buses that Smith believes contains video and possibly crash data.
"We have to see the viability of it after this catastrophic accident," Smith said.
He said it was a "grueling and gruesome process" removing the bodies of the school bus driver, the 33-year-old commuter bus driver and four of her 12 passengers.
Ten people were hurt, two critically. All the victims were adults. Police have not yet released any of their names.
The National Transportation Safety Board is leading the investigation. Lead investigator Jennifer Morrison said her team will likely remain in Baltimore through the week, gathering facts to determine the cause of the crash and make safety recommendations.
After hitting the Loudon Park Cemetery wall, a Ford Mustang and a pillar near the cemetery entrance, the school bus veered across the double-yellow center line of Frederick Avenue and smashed into the commuter bus near the driver's compartment. It raked the side of the commuter bus, peeling off sheet metal, finally stopping with its front end buried in the left rear quarter of the MTA vehicle in southwest Baltimore.
The public transit riders were on the No. 10 route between Dundalk, a largely blue-collar community southeast of Baltimore, to Catonsville, a western suburb.
"They're on their way to make a living, they're on their way to the job, and they're on their way to support their families," Baltimore Police Commissioner Kevin Davis said.
The Mustang driver, Shawn Braxton, said he was driving to work when the bus hit his car.
"I'm just mentally trying to deal with, you know, surviving the accident while other people died," he told The Associated Press.
The school bus was contracted from Baltimore-based AA Affordable Transportation and served 18 elementary students, the city's public school system said in a statement.
Federal records show the company had no violations or other crashes reported in the two years ending this past September. In 2012, an AA Affordable school bus was involved in a crash that injured at least 13 people, including students, when it collided with a minivan, the Baltimore Sun reported.
The company's five-year contract with the school district ends in June 2018, according to online public records.
Copyright 2016 The Associated Press. All rights reserved. This material may not be published, broadcast, rewritten or redistributed.