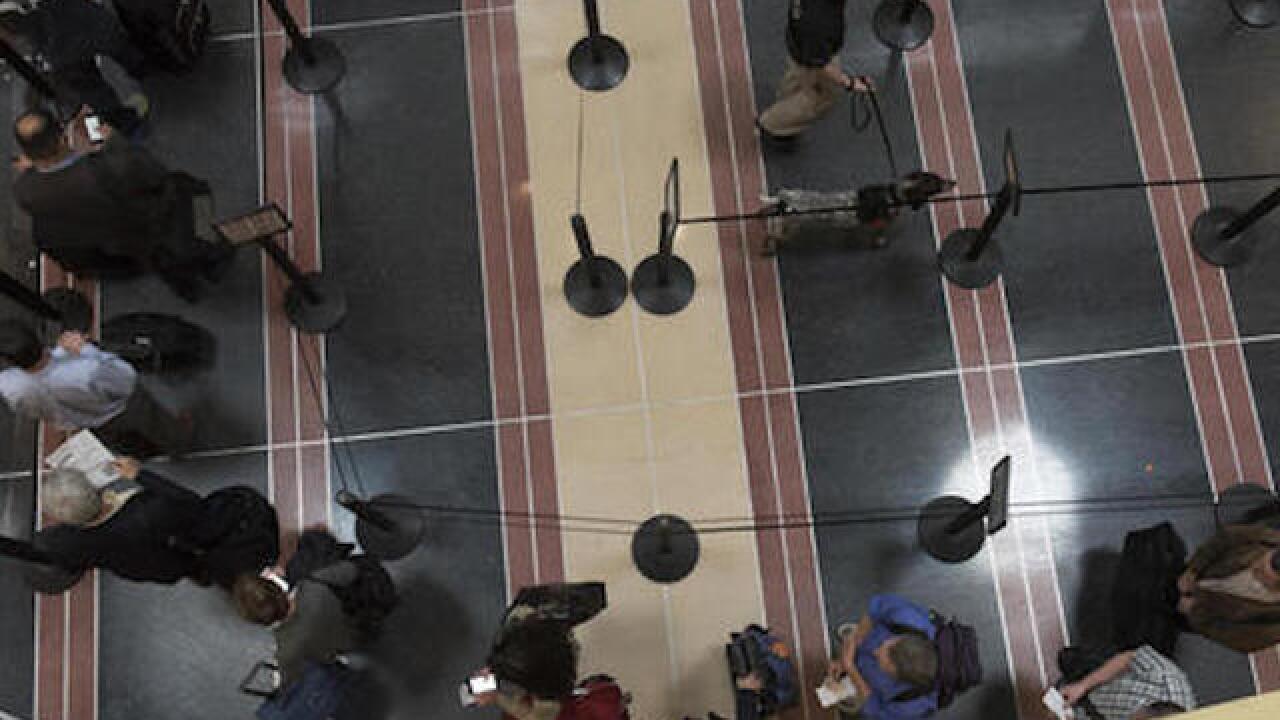 WASHINGTON (AP) — Facing a growing backlash over extremely long waits at airport security, Homeland Security Secretary Jeh Johnson asked fliers "to be patient" as the government takes steps to get them onto planes more quickly.

Travelers across the country have endured lengthy security lines, some snaking up and down escalators, or through food courts, and into terminal lobbies. At some airports, lines during peak hours have topped 90 minutes. Airlines have reported holding planes at gates to wait for passengers to clear security.

Johnson said Friday that the government is working to ease the lines, although travelers should expect to wait as they travel this summer. Whatever steps TSA takes, Johnson said, it won't neglect its duty to stop terrorists.

"Our job is to keep the American people safe," Johnson told reporters at a news conference. "We're not going to compromise aviation security in the face of this."

The Transportation Security Administration has fewer screeners and has tightened security procedures. Airlines and the TSA have been warning customers to arrive at the airport two hours in advance, but with summer travel season approaching even that might not be enough.

Airlines are expecting a record number of fliers this summer, meaning more passengers and bags to screen. Johnson said TSA is working with airlines to enforce limits on carry-on bags and their size. Passengers often over-pack carry-ons to avoid paying the $25 checked bag fee most airlines charge. Two U.S. senators this week suggested that airlines should drop those fees. But that doesn't appear to be a solution either.

The TSA still scans checked luggage. And even that might not ease checkpoint problems. On Thursday, a video surfaced of giant lines at Chicago's Midway airport. Southwest Airlines — which is the only U.S. airline that doesn't charge for checked bags — is the predominant airline at Midway.

In the past three years, the TSA and Congress cut the number of front-line screeners by 4,622 — or about 10 percent — on expectations that an expedited screening program called PreCheck would speed up the lines. However, not enough people enrolled for TSA to realize the anticipated efficiencies.

Congress this week agreed to shift $34 million in TSA funding forward, allowing the agency to pay overtime to its existing staff and hire an extra 768 screeners by June 15 to bring it up to the congressionally mandated ceiling of 42,525.

But that might barely make a dent on the lines. Even as it boosts hiring, the agency loses about 100 screeners a week through attrition. And J. David Cox, the president of the union representing the TSA officers, this week sent a letter to congressional leaders suggesting that 6,000 additional screeners are needed.

After the press conference, Rep. John Mica, a Florida Republican who sits on the House Transportation Committee, suggest that TSA should tailor screeners' schedules to fit the volume of passenger traffic in lines, rather than conforming to shift schedules.

Airlines and airports have hired extra workers to handle non-security tasks at checkpoints — such as returning empty bins to the beginning of the line — as part of an effort to free up as many TSA employees to handle passenger screening.

On the 7:20 a.m. flight to Las Vegas, 52 of the 160 passengers were not onboard 10 minutes before departure. American held the plane an extra 13 minutes. That allowed 23 passengers to hop onboard, but 29 still missed the jet and arrived on later flights.

At another American hub, Chicago's O'Hare International Airport, security lines peaked at one hour and 45 minutes on Thursday.

Delta Air Lines CEO Ed Bastian told The Associated Press Thursday that "the longer lines get the more passengers are going to miss flights and there's not much you can do about that."

The biggest help to ease lines is to have more fliers enroll in the PreCheck program .

PreCheck gives previously vetted passengers special screening. Shoes, belts and light jackets stay on. Laptops and liquids stay in bags. And these fliers go through standard metal detectors rather than the explosive-detecting full-body scanners most pass through.

PreCheck security lanes can screen 300 passengers an hour, twice that of standard lanes.

The TSA's goal was to have 25 million fliers enrolled in the program. But as of March 1, only 9.3 million people were PreCheck members. Getting once-a-year fliers to join has been a challenge.

Johnson Friday said that 10,000 people applied for PreCheck Thursday, up from 8,500 a day in April and 7,500 in March. Still, at that pace, it will take more than four years to reach 25 million members.