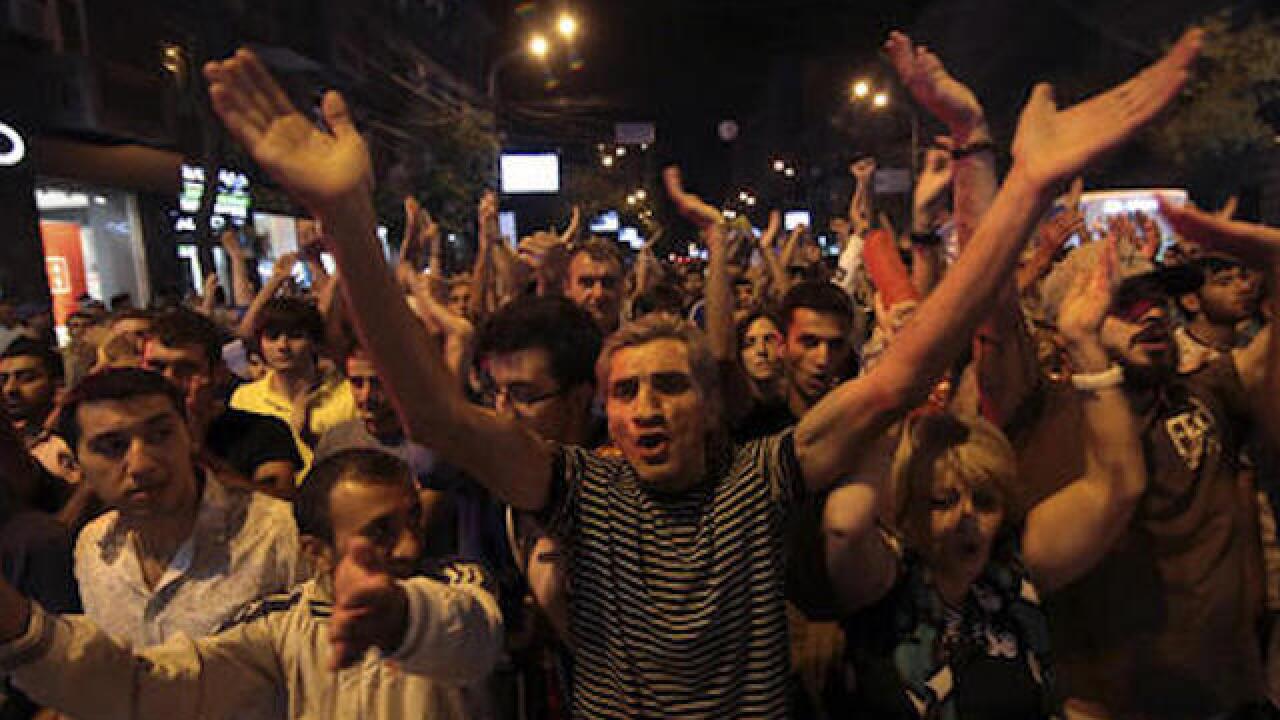 Aram Kirakosyan
<p>Anti-government protesters, supporters of the armed group who have been holed inside a police station, shout as they march through a street in Yerevan, Armenia, Saturday, July 30, 2016. Armed members of an opposition group barricaded inside a police station in Armenia's capital shot an officer dead on Saturday, police said. (Aram Kirakosyan/PAN Photo via AP)</p>

The standoff involving armed members of a radical opposition group also set off protests that led to unrest in the capital, Yerevan.

The leader of the gunmen barricaded inside the police compound, Varuzhan Avetisyan, said in a telephone interview with a local media that they decided to surrender after security forces used armored vehicles to enter the police compound.

Another factor, he said, was that police had started to shoot gunmen who ventured outside. Most were hit in the leg, but a man shot Sunday was hit in the chest, he said.

A group of 31 armed men seized the police compound on July 17 to demand freedom for the leader of their group, who was arrested in June. The group, Founding Parliament, has sharply criticized the government of the former Soviet republic and called for people to take to the streets to force the president and the prime minister to step down.

In recent days, four members of the group had surrendered, including two earlier Sunday, and at least seven were wounded. The gunmen killed one officer and wounded several others in their initial attack.

Police accused the opposition gunmen of killing a second officer Saturday as he sat in a vehicle away from the compound, but Avetisyan denied this.

The gunmen had held four police officers hostage for a week before releasing them unharmed. They later seized four members of an ambulance crew, but the last two were allowed to leave Saturday.

On Saturday night, the demonstrators marched down Baghramyan Avenue toward the main government buildings and the presidential residence, but were stopped by riot police, who strung coils of barbed wire across the road. The demonstrators blocked traffic for about two hours, but dispersed peacefully early Sunday.