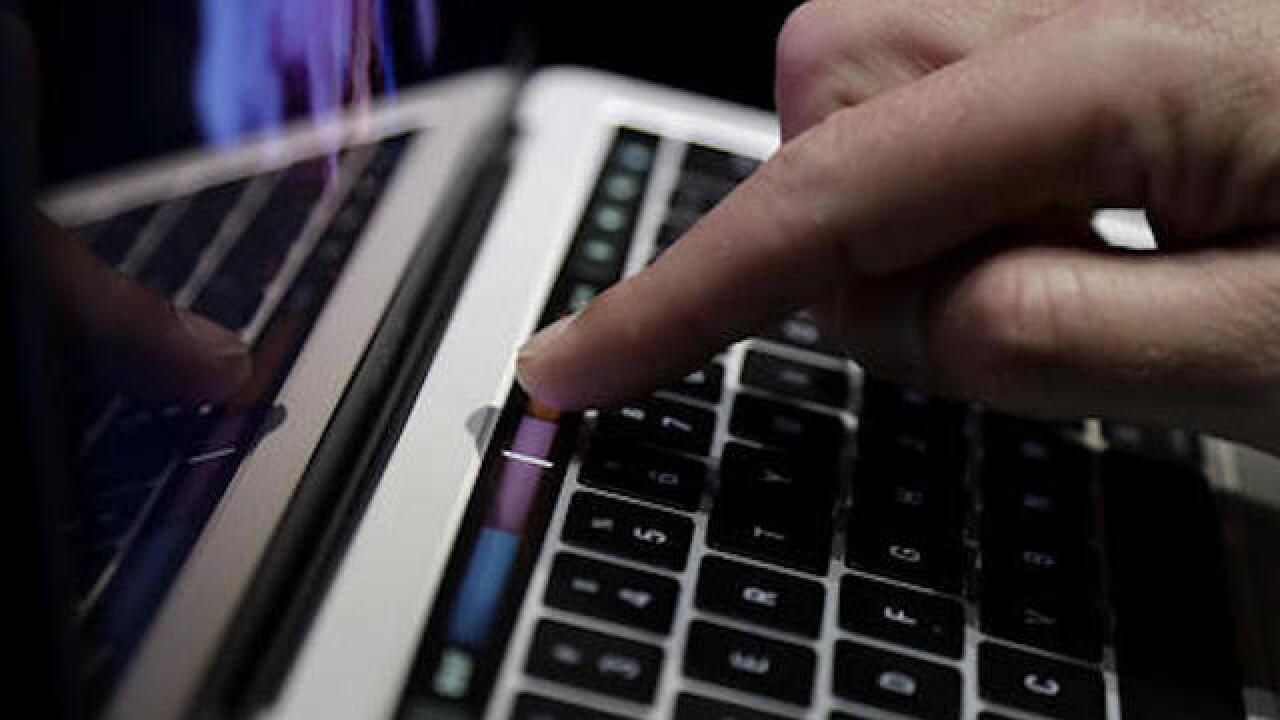 The breakout feature is, as widely speculated, a new touch-sensitive panel on the MacBook Pro, Apple's top-of-the-line laptop. The touch bar will offer functionality that's familiar to many iPhone users. It shows word suggestions as you type and lets you scroll through libraries of emojis. When watching movies, the touch bar can offer playback controls. When editing photos, the touch bar changes to offer options to lighten or rotate. It adapts and offers different controls for whatever app or website you're using.

The Pro will also come with a fingerprint sensor, similar to one in the iPhone, to unlock the device. It can recognize different users and offer quick switching based on the fingerprint. The new Macs will also offer a dedicated key for the Siri voice assistant, a feature added with the MacOS Sierra update last month.

In keeping with recent updates to other Apple products, the company will replace some computer ports with a new USB-C outlet. Connectors using USB-C technology can transmit data faster than older USB jacks. They're also smaller and have a uniform shape, which means the USB-C jack can be inserted with either side facing up.

Apple unveiled the new Macs at an event at its headquarters in Cupertino, California. During the event, Apple also said it wants to unify television viewing on its streaming TV device with a new app simply called "TV."

The changes to the Mac are the first significant ones in years. Sales of the Mac have been in a slump this year, after a streak of growth in 2014 and 2015 that seemed to defy global trends. Consumers generally are buying fewer PCs and using smartphones or tablets instead.

Apple itself has promoted its latest iPad tablet, the iPad Pro, as a device capable of replacing the laptop for many users. And in contrast with the Mac's earlier years — when Apple marketed its computers to people who saw themselves as creative professionals or just independent thinkers — Apple has begun promoting the Mac as a computer for business users, too.

Microsoft, traditionally a software company, has begun selling its own line of high-end Surface laptops and this week introduced its first Surface desktop PC. Like the iMac in years past, analysts say the new Surface machine has a premium price and features that will most likely appeal to visual designers and other creative professionals.

For Apple, the Mac line has been eclipsed financially by other products — first the iPod and now the iPhone — that have made far more money in recent years.

Apple sold $22.8 billion worth of Macs in its past fiscal year, although that was just 11 percent of the company's total revenue. It sold $136 billion worth of iPhones. In the most recent quarter, Apple sold 9.3 million iPads and 4.9 million Macs, although the iPads accounted for just $4.3 billion in sales while the Macs contributed $5.7 billion.

But the Mac has remained a significant product for Apple, and one that's important to intensely loyal fans. Apple co-founder Steve Jobs introduced the first Macintosh in 1984 with the famous commercial of a woman hurling a hammer at a dystopian overlord, setting the tone for Apple's corporate marketing strategy in the years to come.

Apple TV is a newer endeavor, and the new TV app could make it easier for viewers to find shows to watch, as it means they don't have to check individual apps. Amazon's Fire TV is taking a similar approach with a software update, though the unified experience will be part of the home screen, not an app.

The app, though, is short of a full-fledged streaming-TV service, which reports say Apple has been pursuing. Rather, it brings together TV shows and movies viewers already get through individual subscriptions. The TV app will be synced with iPhones and iPads, so viewers can catch the next episode regardless of device. Apple said its Siri voice assistant will also direct viewers to live events, such as streaming sports.

Separately, Apple said it's delaying shipment of its wireless AirPod earphones, which had been scheduled for late October. In a statement, the company said, "We don't believe in shipping a product before it's ready, and we need a little more time before AirPods are ready for our customers." Apple didn't elaborate. A Nike edition of Apple Watch for runners will still go on sale on Friday as planned.