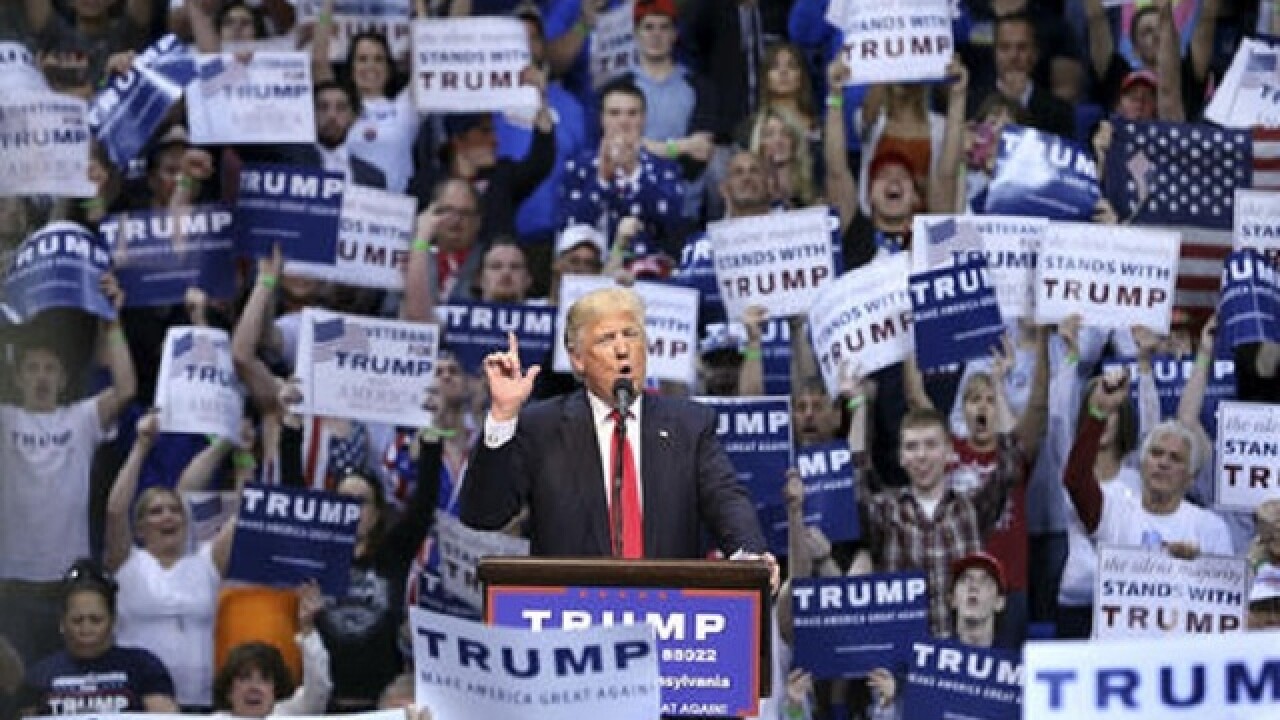 By: Associated Press
Posted at 6:47 PM, Apr 25, 2016
BORDEN, Ind. (AP) — Declaring the Republican presidential contest at "a fork in the road," Ted Cruz and John Kasich defended their extraordinary new alliance on Monday as the party's last, best chance to stop Donald Trump, even as the New York billionaire surged toward another big delegate haul.
Trump, the Republican front-runner, lashed out at what he called collusion by desperate rivals, intensifying his attacks on the GOP presidential nomination system on the eve of Tuesday's round of primary elections in the Northeast.
"If you collude in business, or if you collude in the stock market, they put you in jail," Trump said as he campaigned in Rhode Island.. "But in politics, because it's a rigged system, because it's a corrupt enterprise, in politics you're allowed to collude."
"It shows how pathetic they are," he said of his Republican rivals.
Connecticut, Pennsylvania, Delaware and Maryland hold primaries Tuesday along with Rhode Island.
Cruz, a Texas senator, and Kasich, the Ohio governor, announced the terms of an unprecedented agreement late Sunday night to coordinate primary strategies in three of the 15 remaining primary states.
Kasich will step back in the May 3 Indiana contest to let Cruz bid without interference for voters who don't like Trump. Cruz will do the same for Kasich in subsequent contests in Oregon and New Mexico.
The arrangement does not address Tuesday's primaries, where Trump is expected to add to his already hefty delegate lead. Yet the shift offers increasingly desperate Trump foes a glimmer of hope in their long and frustrating fight to keep him from amassing enough delegates to seal his nomination and avoid a contested national convention in July.
Ignoring the Northeast on Monday, Cruz insisted, "We are at a fundamental fork in the road," as he campaigned in Indiana.
"It is big news today that John Kasich has decided to pull out of Indiana to give us a head-to-head contest with Donald Trump," the fiery conservative told reporters. "That is good for the men and women of Indiana. It's good for the country to have a clear and direct choice."
The plan carries risks — especially as Trump bashes a "rigged" nomination system. Some would-be Cruz supporters in Indiana agreed with Trump's criticism.
"That's kind of sneaky," said Joe Conder, a 75-year-old retired civil engineer from Scottsville, who is deciding between Cruz and Trump. "It's more about politics than getting things done."
Kasich sent mixed messages as he addressed the pact for the first time while campaigning in Philadelphia. Asked what Indiana voters should do next week, the Ohio governor urged them to vote for him.
"I've never told them not to vote for me. They ought to vote for me," Kasich said just 13 hours after promising to give Cruz "a clear path" in Indiana. He said he had simply agreed not to spend "resources" in Indiana.
Trump is the only Republican candidate who can clinch the GOP presidential nomination before his party's national convention. Yet his path is narrow.
The front-runner needs to win at least four of the five Northeastern states on Tuesday. He enters the day with 845 delegates, 392 short of the 1,237 needed to represent his party in the general election in November.
Eliminated from reaching that total in the primaries, Cruz and Kasich can only hope to block Trump from reaching a majority — and a first-round convention victory — and thus force a contested convention where delegates could select a different nominee.
"It is now abundantly clear that nobody is getting to 1,237," Cruz declared Monday. "We are headed to a contested convention. And at a contested convention, Donald Trump is in real trouble."
Trump was also the target on the Democratic side as Hillary Clinton eyed Tuesday primary victories she hoped would all but seal her victory over Vermont Sen. Bernie Sanders.
The former secretary of state ignored Sanders as she campaigned in Delaware, assailing Trump as being out of touch with average Americans.
"If you want to be president of the United States, you've got to get familiar with the United States," Clinton said. "Don't just fly that big jet in and land it and go make a big speech and insult everybody you can think of."
Associated Press 2016