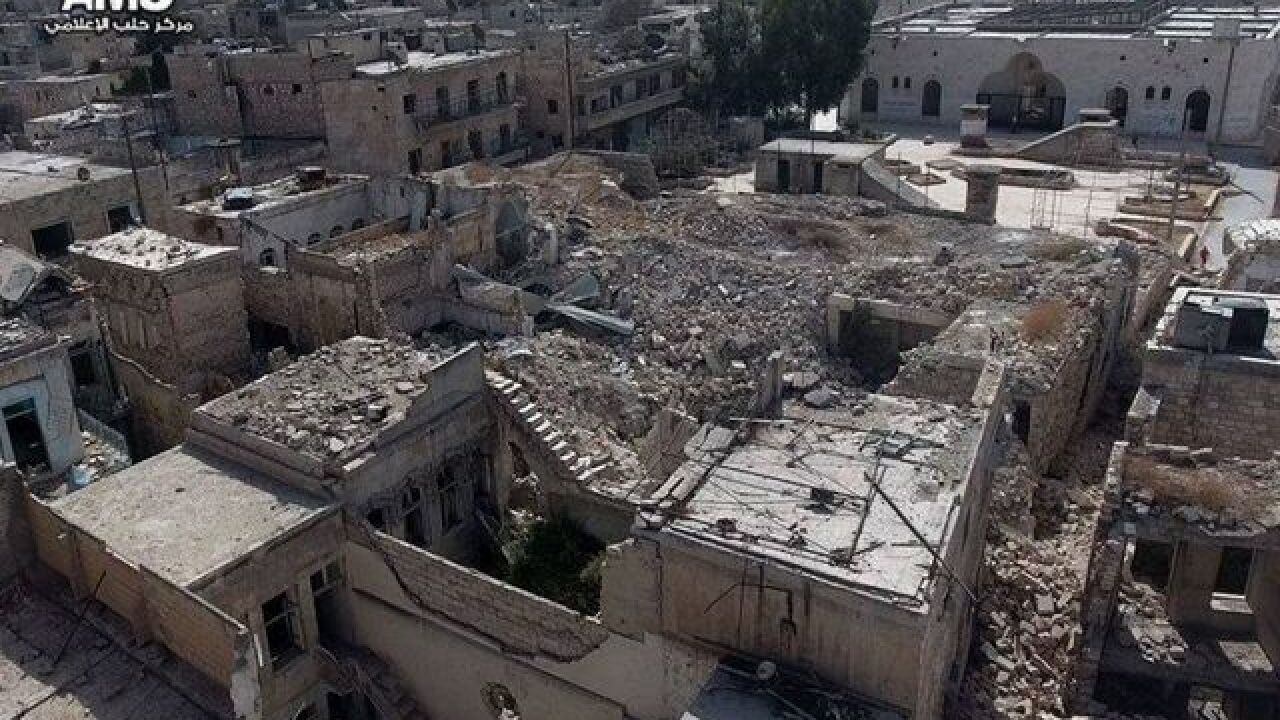 (CNN) -- A ceasefire brokered by Russia and Turkey for eastern Aleppo has been broken, activists on the ground and the Turkish Foreign Minister say, as a planned evacuation of civilians has also been delayed.

An activist with the Aleppo Media Center (AMC), Salah al-Ashkar, told CNN that heavy shelling had resumed on the remaining rebel-held areas Wednesday after the ceasefire was announced late Tuesday.

Activists claim that the shelling was coming from the regime, while Syrian state television reported deaths and injuries from rebel fire.

CNN could not independently verify the claims but could hear shelling during conversations with activists inside the zone.

"The ceasefire agreement that started yesterday seems to have been violated. Tens of artillery are falling on besieged neighborhoods in Aleppo. There are wounded in the field hospitals, wounded from the shelling," the AMC activist al-Ashkar said in a video posted to social media.

Turkey's Foreign Minister Mevlut Cavusoglu said that the Syrian regime and "some forces" were trying to break the ceasefire.

"We see (the) regime and some forces trying to break the ceasefire. There is Russia here. There is Iran. There are forces supported by Iran and of course regime. What we want is that nobody should try to throw the ball to others. There is an agreement here and it should be applied," he told the Turkish state-run news agency Anadolu.

The UN estimates around 50,000 civilians are still trapped inside the rebel-held zone. They were due to be evacuated at dawn but the Syrian Observatory for Human Rights (SOHR) said in a statement issued earlier today that the buses due to carry civilians out remained idle.

The ceasefire that should see government troops, regime-aligned militia and rebel forces hold fire was announced late Tuesday as government forces were on the brink of taking all of Aleppo.

The first group of civilians scheduled to leave was supposed to consist of 70 injured people and family members -- a total of 150 people.

Rebel fighters were also offered safe passage out of the devastated city under a ceasefire deal brokered largely by Turkey.

CNN affiliate ITN, who has a reporter on the ground, has also posted on social media that no buses have left.

An ICRC official in Aleppo told CNN that the organization "is ready to help the parties to this agreement in overseeing the evacuation of civilians."

He added that they are "on standby" in case a request is made to support in the evacuation.

'Are you truly incapable of shame?'

Syrian regime forces were on the brink of taking eastern Aleppo on Tuesday as the UN said pro-regime forces had reportedly carried out executions of at least 82 civilians.

The UN said it had received reports that some civilians had been shot in their homes and on sight.

Speaking at a UN Security Council Emergency Briefing on Syria on Tuesday, US ambassador Samantha Power had some scathing words for her Syrian, Iranian and Russian counterparts.

"You bear responsibility for these atrocities," she said of the plight of eastern Aleppo residents amid reports of widespread summary executions, including of women and children, by Syrian forces in formerly rebel-held areas.

"When one day there is a full accounting of the horrors committed in this assault of Aleppo -- and that day will come, sooner or later -- you will not be able to say you did not know what was happening."

She said the actions of the three players "should shame" them.

"Three Member States of the UN contributing to a noose around civilians. It should shame you. Instead, by all appearances, it is emboldening you... Are you truly incapable of shame?"

Vitaly Churkin, Russia's ambassador to the United Nations, told the UN Security Council that the Syrian government has established control over eastern Aleppo.

Al-Quds Hospital Director Dr. Hamza al-Khatib told CNN's Christiane Amanpour that children were being slaughtered in the executions, particularly those with ties to the regime's opposition.

"People are scared to go out in the street. Dead bodies haven't been taken to the graveyard to be buried," he said.

"A lot of people are scared to go to graveyards to bury their own family members. A lot of dead bodies are in front of the hospital."

Rebel groups held eastern Aleppo for more than four years after the Arab Spring uprising and a Syrian regime siege on the area had essentially cut it off from the outside world, sparking a humanitarian crisis there.