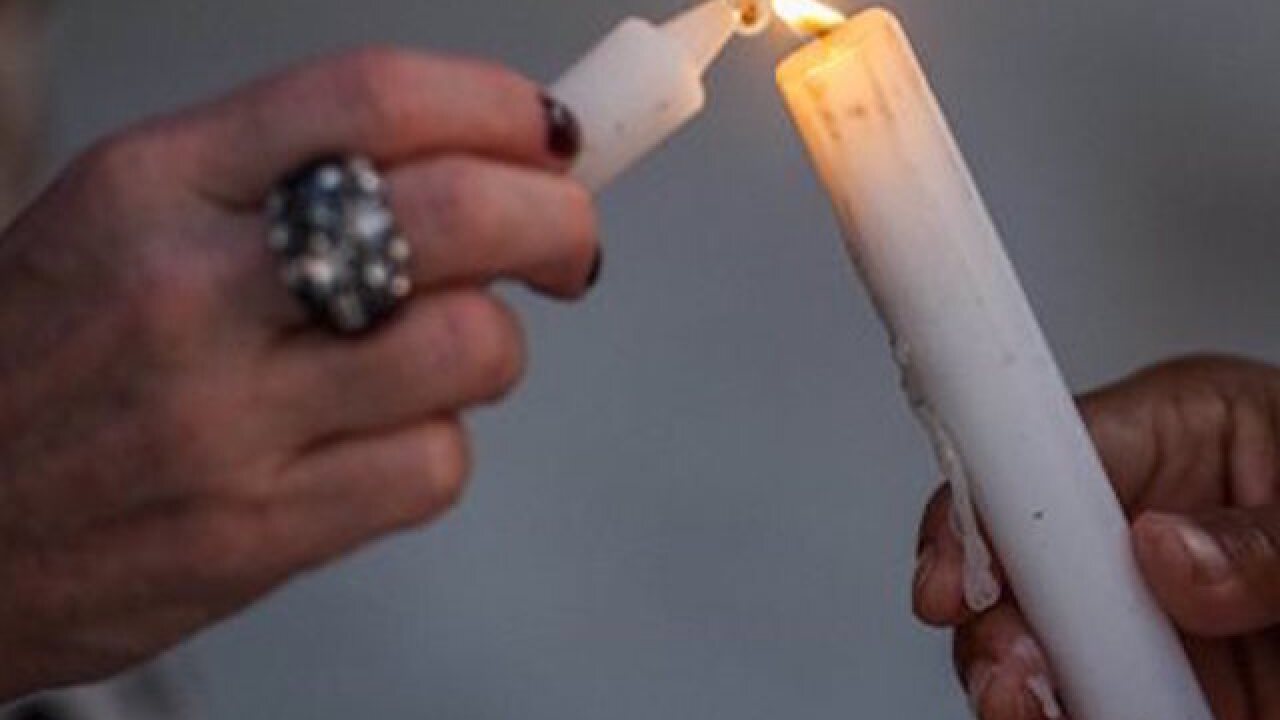 Copyright Associated Press
Mickey Welsh
<p>Candles are lit as concerned citizens gather for a candlelight vigil for convicted murderer Tommy Arthur on the steps of the Alabama Capitol Building in Montgomery, Ala., on Thursday, Nov. 3, 2016. Arthur is scheduled to be executed Thursday night.(Mickey Welsh/The Montgomery Advertiser via AP)</p>

ATMORE, Ala. (AP) — The U.S. Supreme Court on Thursday night stayed the execution of an Alabama man convicted of the 1982 shooting death of a woman's husband in a murder-for-hire arrangement.

Five justices voted to stay the execution of Tommy Arthur as the high court considers whether to take up his challenge to Alabama's death penalty procedure. Arthur, 74, was scheduled to be executed Thursday by lethal injection at a south Alabama prison.

"We are greatly relieved by the Supreme Court's decision granting a stay and now hope for the opportunity to present the merits of Mr. Arthur's claims to the Court," Arthur's attorney Suhana Han said in a statement.

This is the seventh time that Arthur, who has waged a lengthy legal battle over his conviction and the constitutionality of the death penalty, has received a reprieve from an execution date, a track record that has frustrated the state attorney general's office and victims' advocacy groups.

Chief Justice John Roberts wrote Thursday that he did not think the case merited a stay, but voted to grant it as a courtesy to the four justices who wanted to "more fully consider the suitability of this case for review." The execution stay will expire if the court does not take up Arthur's case.

The attorney general's office had unsuccessfully urged the court to let the execution go forward and expressed disappointment at the decision.

"With all due respect to the Supreme Court, tonight's order undermines the rule of law. While I agree with Chief Justice Roberts that 'this case does not merit the Court's review,' in my view, there is no 'courtesy' in voting to deny justice to the victims of a notorious and cold-blooded killer," Alabama Attorney General Luther Strange said in a statement

Arthur was convicted of killing Troy Wicker with a shot through the eye as he slept in his Muscle Shoals home. Wicker's wife initially told authorities she had been raped and that an intruder killed her husband, but she later testified she had sex with Arthur and promised him $10,000 to kill her husband.

At the time of Wicker's death, Arthur was in a prison work-release program after being convicted of the 1977 murder of his sister-in-law.

Juries twice convicted Arthur, but those convictions were overturned on appeal. During his third trial in 1991, Arthur ignored the advice of his attorneys and asked the jury to sentence him to death. He said at the time that he didn't have a death wish, but it was a way of opening more avenues of appeal.

Arthur's attorneys — in their request to the Supreme Court— argued that a federal judge prematurely dismissed his lawsuit challenging Alabama's lethal procedure. His lawyers argued the judge misapplied a requirement for inmates to name an alternate execution method. Arthur suggested a firing squad and another lethal injection drug, but the judge said Arthur had not identified a source for alternate drugs and a firing squad wasn't explicitly named as an allowed form of execution in Alabama law.

They also argued that Arthur was sentenced under a similar structure that was ruled unconstitutional in Florida.

Arthur was scheduled to be executed at 6 p.m., but the state agreed to push back the time until 8 p.m. The Supreme Court issued a temporary stay at 9:30 p.m., and followed it up with the 10:55 p.m. order that stopped the execution for the night.

Arthur, who has maintained his innocence, had also sent Alabama Gov. Robert Bentley a four-page handwritten letter requesting a stay of execution, arguing he had never had a fair trial and that potential DNA evidence in the case had not been reviewed. Bentley did not intervene in the case.

Wicker's wife, Judy Wicker, served 10 years in prison for her part in the killing.