A week after Hurricane Michael hit, more misery and a rising death toll 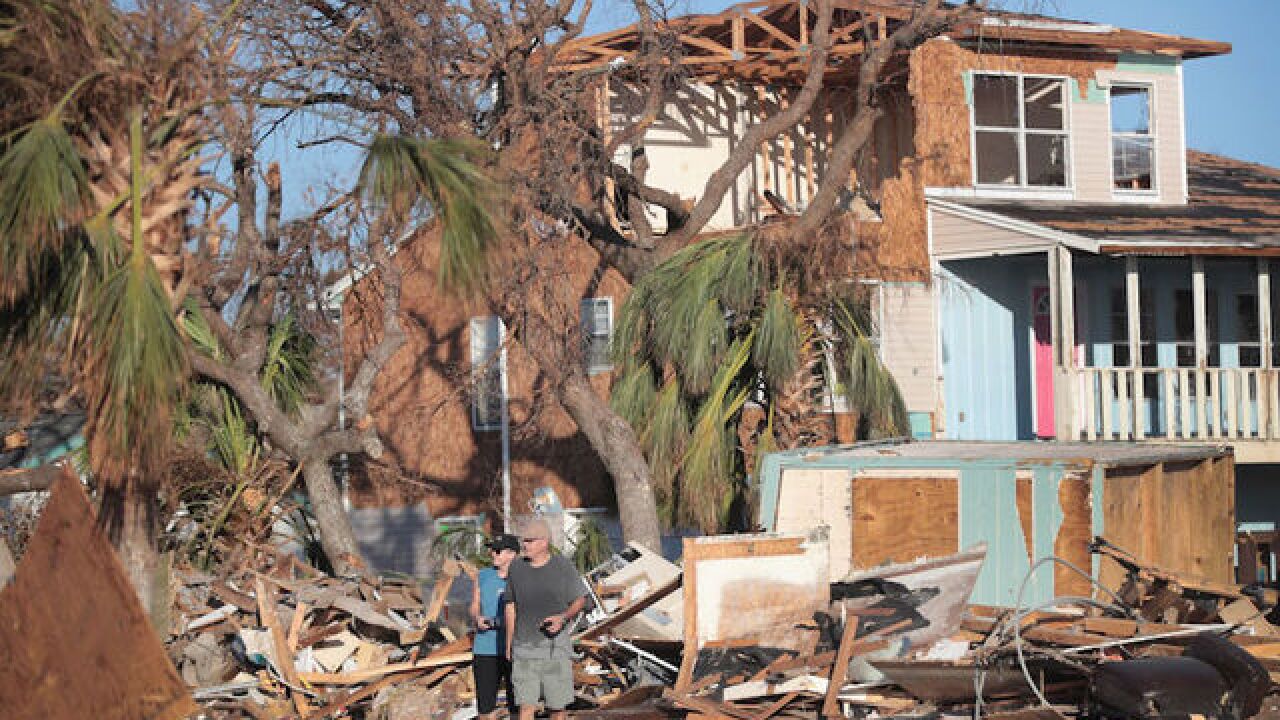 A week after Hurricane Michael slammed the Florida Panhandle, the scope of the storm's fury is still emerging as the death toll rises and rescuers search for the missing in the hardest-hit areas.

Michael has killed at least 29 people across Florida, Georgia, North Carolina and Virginia. Of those,12 are in Florida's Bay County, where the hurricane made landfall last week as a Category 4 storm.

Authorities fear some people who did not evacuate could be buried beneath piles of concrete, wood and mangled metal in Florida.

The Florida Department of Health provided an online form to report those who are still unaccounted for, trapped or in need of help. While the exact number of the missing was not immediately available, more details are expected to emerge as electricity and phone services are gradually restored across the Panhandle.

Bay County, which was badly hit, has linked 12 deaths to the Category 4 storm, up from four Monday. Details on how the people died were not immediately available.

Sheriffs deputies said they're finding more victims as the waters recede, according to CNN affiliate WFLA.

Of the additional bodies found Tuesday, one was discovered by a K-9 in the Mexico Beach area while a drone unit found another one.

The mountain of debris scattered in neighborhoods is complicating rescue and recovery efforts. Across Bay County, more than 2,500 structures are damaged, and at least 162 have been destroyed, authorities said.

Bay County Sheriff Tommy Ford said he does not have an accurate number of the missing people due to the lack of communications in affected areas.

Gov. Rick Scott's request for the county's transitional shelter has been approved, and federal officials will provide more options for families to stay, including hotel rooms, condos and other rentals.

Not everyone has seen what's left of their homes

In the obliterated town of Mexico Beach, some residents have visited their properties, surveyed the damage and retrieved some items. Many more are expected Wednesday.

While they aren't allowed to stay just yet, they can show the National Guard troops their IDs and visit their neighborhoods to get an idea of what it will take or if they want to rebuild.

In some neighborhoods, all that's left are concrete slabs and piles of wood, and residents have to guess the general location of where their homes once stood.

Chad Frazier has plenty of reasons to be devastated. His business was wiped out by the hurricane. His son's middle school in Panama City was also annihilated.

But Frazier said he is too thankful to be upset. Immediately after the hurricane, strangers came from out of town to provide food and water.

"The people who came, that was the biggest blessing to us," he said.

As he stood in front of a mountain of debris, Frazier said he's coping well, thanks to the outpouring of generosity.

Cell phone service is trickling back on

After days of no cell reception, some residents were able to use their phones this week.

At Inlet Beach, near Panama City, excited drivers pulled over on the side of the road at the first sign of cell reception, CNN affiliate WEAR reported Tuesday. It said many of them hadn't had power and cell service for days.

In some areas, people used their cell phones for the first time when a company brought in a flying COW -- a Cell On Wings -- a drone that serves as an LTE site.

While service has resumed in some places, some still have no cell reception.

"Due to these outages, families are having a difficult time communicating with loved ones, first responders have faced challenges communicating and people are having difficulty getting their prescriptions filled because of the inability to connect to a network," Scott said Tuesday.

The governor demanded that telecommunications companies provide a restoration plan.

In addition to lack of cell service, more than 158,000 power customers didn't have electricity Tuesday -- nearly 140,000 of them in Florida.

Some still have no food or power

Residents in the hardest-hit areas are relying on airdropped food and water to survive.

The Federal Emergency Management Agency has 12 teams in Florida to help people register for disaster assistance. It also has 42 distribution points throughout Florida and Georgia where people can get food and water.

About 1,200 people are in shelters, state officials said. Drivers have been lining up for hours to get fuel.

Some school districts are still closed

Inmates have been evacuated

The Florida Department of Corrections announced evacuations of more than 4,000 inmates following structural damage to facilities caused by the hurricane.

They included the Bay Correctional Facility, which evacuated 959 inmates, while the Gulf Correctional Institution and Annex transferred 2,618 inmates to other facilities.