Copyright 2017 Scripps Media, Inc. All rights reserved. This material may not be published, broadcast, rewritten, or redistributed.
Pleasant, Matt

HILLSBOROUGH COUNTY, Fla — A 70-year-old woman was killed trying to avoid hitting a dog on Interstate 275 on Monday.

According to the Florida Highway Patrol, Mary Norloff, of St. Pete Beach was traveling north on I-275 around 10:45 a.m. when a dog ran onto the expressway near Fowler Ave.

Norloff slammed on her brakes to avoid hitting the dog, but was rear-ended by an empty car hauler. She died at the scene.

A SUV was also hit in the chain-reaction crash. The drivers of the car hauler and SUV were not hurt.

Castro says Norloff was at his house hours before the crash exchanging Christmas gifts with his family.

"Just saw her this morning and said 'Merry Christmas and see you when you get back,'" Castro said. 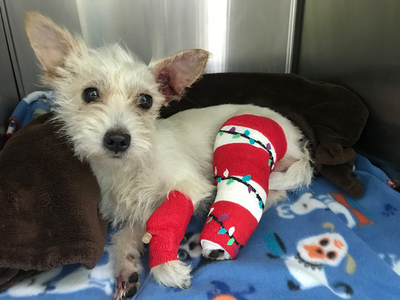 Tampa-based WFTS has learned, the dog, a terrier-mix named Loki, was taken to All Creatures Animal Hospital in Lutz. The puppy received several stitches for two cuts and will likely need surgery for a broken leg.

"For being the size of dog that he is versus the size of a vehicle, he definitely lucked out," said Dr. Courtney Riley. "I think anybody's gut reaction is to slam on the brakes in a situation like that, it's just a very sad situation."