44 ways to judge the Obama era 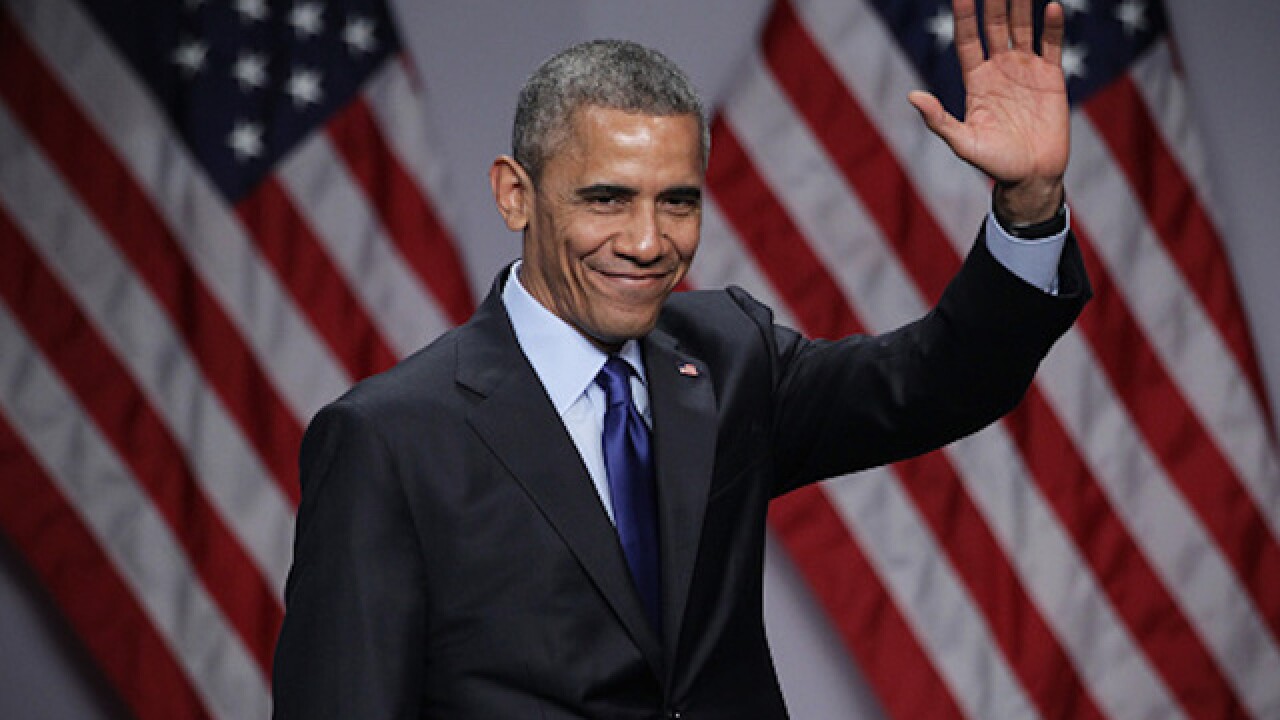 Copyright Getty Images
Alex Wong
<p>NATIONAL HARBOR, MD - MARCH 23: U.S. President Barack Obama waves after he spoke during the SelectUSA Investment Summit March 23, 2015 in National Harbor, Maryland. The summit brought together investors from around the world to showcase the diversity of investment opportunities available in the U.S. (Photo by Alex Wong/Getty Images)</p>

WASHINGTON (CNN) -- President Barack Obama, the 44th commander in chief of the United States, caps off eight years in office on January 20.

Those eight years saw the nation grapple with the worst economic disaster since the Great Depression. The country's response to that crisis helped reshape the economy and the makeup of the political system a few times over. And for every day of those eight years, the nation was at war -- on multiple fronts, against multiple groups for multiple purposes.

All of these momentous changes during Obama's presidency had very real effects on people across the country and the globe. And for each of these real-world impacts, there is a number.

CNN Money has charted the Obama economy while The New York Times has explored 2016 in numbers. Here, 44 statistics open a window to the 44th President's expansive impact.

The recession cost many people their livelihood. The following years saw many of those same people gain it back. While part of the drop in unemployment came from people leaving the workforce, enough people have jobs now that, statistically speaking, employment has recovered from the darkest days of the economic crisis.

According to the Bureau of Labor Statistics' seasonally adjusted unemployment rate:

Due in part to a revolution in domestic fossil fuels and massive oil production overseas, oil and gas have been pretty cheap for some of Obama's presidency.

Following years of upward climb and a rally after President-elect Donald Trump's electoral victory, stocks are near record highs.

Obama's election coincided with Democratic victories across the nation and the strong 2008 showing built on the party's successes in 2006. But as the years went on, the situation virtually reversed itself. Obama will exit office with the Republican Party resurgent on the state and federal levels.

Here's the breakdown for state government, according to the National Conference of State Legislatures:

Here's the breakdown for the US Congress, according to the Senate and House of Representatives.

Deaths from opioid-related overdose deaths have been on the rise. More people are dying from overdoses on heroin and prescription pain medicine like oxycodone and fentanyl.

States with legal marijuana or cannabis products have blossomed under Obama. When he took office, recreational marijuana wasn't legal in any state.

Here's what marijuana legalization looks like now, with information compiled by CNN Health:

The Affordable Care Act set aside funding for states to expand Medicaid -- a government health care program for the poorest Americans. But the process became something of a tussle with state governments and many of their Republican leaders. By the end of Obama's presidency, only the slim majority of states had opted to expand Medicaid.

The District of Columbia and 31 states expanded Medicaid, per the Kaiser Family Foundation.

Here's the total percentage of people without insurance, according to the US Census Bureau's American Community Survey:

By the end of Obama's presidency, government debt had nearly doubled to about $20 trillion.

Trump said during his campaign that he'd create a special force to deport undocumented immigrants. Although Obama criticized Trump's immigration proposals, he detained and deported millions of men, women and children. Obama's administration deported the people -- 434,015 -- in 2013.

Here are total "removals" of people according to the Department of Homeland Security's 2015 yearbook of immigration statistics (the most recent year for which data are available):

The Federal Reserve increased its interest rate by .25% in December 2016 for the second time since the financial crisis. The rates had been cut to zero in 2008. Many were concerned the Fed's easy money policies would cause inflation to skyrocket. Instead, inflation hasn't risen by much yet for years.

Here's the rate of inflation, per the Minneapolis Fed.

The US has grown more unequal over the past few decades, including the past eight years.

One commonly cited measure is the Gini index. The number ranges from zero to 1, and the higher the Gini index is, the more unequal the distribution of income is.

Another way to look at it comes from a recent study by economists Thomas Piketty, Emmanuel Saez and Gabriel Zucman.

Debate abounds over how and why incomes vary by gender and whether the wage gap can fairly be said to exist. However, men and women, as well as people of different races, all have much different pay.

Here are the median weekly earnings for employed, full-time wage and salary workers in 2015, with an overall average of $809, per the Bureau of Labor Statistics.

Following the dips in growth that marked the recession, the economy slowly and steadily rebounded. Many, including Trump, have said observed rates of growth are far too low.

During Obama's tenure, he vetoed a total of 12 bills. Only one of those vetoes, the bill that would allow the families of those killed in the Sept. 11, 2001, terrorist attacks to sue Saudi Arabia for any role in the plot, was overridden by Congress and passed into law.

Since 2009, 1,294 bills were signed into law that dealt with everything from the economy to foreign policy to health care, according to GovTrack.

The Obama administration put forth "an aggressive strategy to end veteran homelessness" in 2010 as part of its overall plan to combat homelessness in the US. The White House reports overall veteran homelessness decreased by 36% since 2010. There have been about 90,000 vouchers from 2008-16 to help house homeless vets, according to the Military Times.

Youth obesity rates in the United States have steadily risen over the few decades past, nearly tripling in the past 30 years -- a trend first lady Michelle Obama worked to reverse during her time in the White House. The Healthy, Hunger-Free Kids Act sought to give more than 50 million children an opportunity to eat healthier school meals.

According to reporting done by The Washington Post, 991 people were shot dead by police in 2015. In 2016, the number decreased to 963, but there remained a number of high-profile cases that caught the country's attention, including the shootings of Philando Castine and Alton Sterling.

The Obama administration created 11.3 million jobs in eight years, and the economy added jobs for 75 straight months, a record that totals 6½ years.

More jobs were created under Obama than under George W. Bush, who only created 2.1 million jobs. However, Obama fell short of Bill Clinton and Ronald Reagan, who saw 22.9 million and 15.9 million jobs created, respectively, under their presidencies.

Obama made combating climate change and promoting efficient sources of energy a key aspect of his presidency. With a 9.4% decrease in carbon emissions from 2008-15, he made progress toward his goal of a cleaner environment, according to the White House.

According to the State Department, Obama took 52 trips abroad and visited 58 countries, plus the West Bank zone, during his presidency. The countries he visited most were France and Germany, both of which he traveled to six times. He visited five of the seven continents, skipping over Australia and Antarctica.

President Obama held 13 state dinners at the White House in his eight years, hosting 16 different countries. He hosted two for China, one while Hu Jintao was still in office in 2011 and one for Xi Jinping in 2015.

The countries he hosted include:

Life expectancy has remained fairly steady under Obama. However, there was a statistically significant drop of 0.1 years from 2015 to 2016, bringing life expectancy down to 78.8 years currently as he leaves office.

The number of people receiving food stamps has increased significantly under Obama, according to the USDA.

Although Obama has vastly reduced the number of troops in Afghanistan during his time in office, he has failed to withdraw all American troops from the battlefields of Iraq and Afghanistan.

When Obama took office in January 2009, there were 34,400 US troops in Afghanistan, according to the State Department.

Just days before the current president turns the White House over to the President-elect, Obama released more prisoners from Guantanamo Bay, according to a defense official at the Pentagon.

Nine of the 171 have been "confirmed" to have returned to terrorist activities, according to a government report.

Obama had pledged to close the controversial center within one year in an executive order he signed shortly after his inauguration in January 2009.

Obama hit the links 333 times since assuming the presidency, according to CBS News' Mark Knoller, the unofficial White House statistician who pledged to track each and every round played by the commander in chief.

While his critics have said this is too many rounds to play, his figure doesn't come close to the amount played by Woodrow Wilson, who is said to have played 1,200 rounds while President.

Obama issued 249 executive orders, the third-lowest of any president since Theodore Roosevelt.

The median household income has both risen and fallen under Obama.

Consumer confidence rose continuously under Obama to its highest level since August 2007 -- before the Great Recession -- according to the Consumer Confidence Index released by The Conference Board.

The 2015 poverty rate was 1 percentage point higher than in 2007, the year before the most recent recession.

This marks the lowest birth rate since the government started keeping track in 1909, according to the Centers for Disease Control and Prevention.

After the Great Recession, milk prices rose and have fluctuated since the economy turned around. Prices have been going down steadily since the beginning of 2015, according to the Bureau of Labor Statistics.

2015 was a historic year for student loan debt. Students graduating with an undergraduate degree had on average $30,100 in loans, up 4% from 2014. Graduates who left college in 2009 when Obama assumed office averaged $24,000 in student loan debt, according to The Institute for College Access & Success.

In 2016, according to the Council on Foreign Relations, the US dropped 26,172 bombs during the course of 2016. But CFR says that number is "undoubtedly low, considering reliable data is only available for airstrikes in Pakistan, Yemen, Somalia, and Libya, and a single "strike," according to the Pentagon's definition, can involve multiple bombs or munitions." This number increased from 2015, according to CFR, where the estimate came to 23,144, which CFR also defined as a "probably slightly low" estimate.

Obama was known as a leader who extensively utilized and expanded the country's drone strike capabilities in fighting terrorism. The Bureau of Investigative Journalism and The Atlantic reported the Obama administration launched 372 drone strikes in Pakistan, 112 in Yemen and 19 in Somalia as of March 2016.

CNN's Kevin Liptak, a White House reporter, has kept a running tally of Obama's acts of clemency -- the president's decisions to pardon or commute criminal sentences.

In his final week as president, Obama commuted the bulk of Chelsea Manning's sentence and pardoned Gen. James Cartwright, who were both accused of leaking information to the public. The same day, Obama commuted hundreds of non-violent drug offenders. With those final moves, Obama's total acts of clemency stood well above his predecessors.