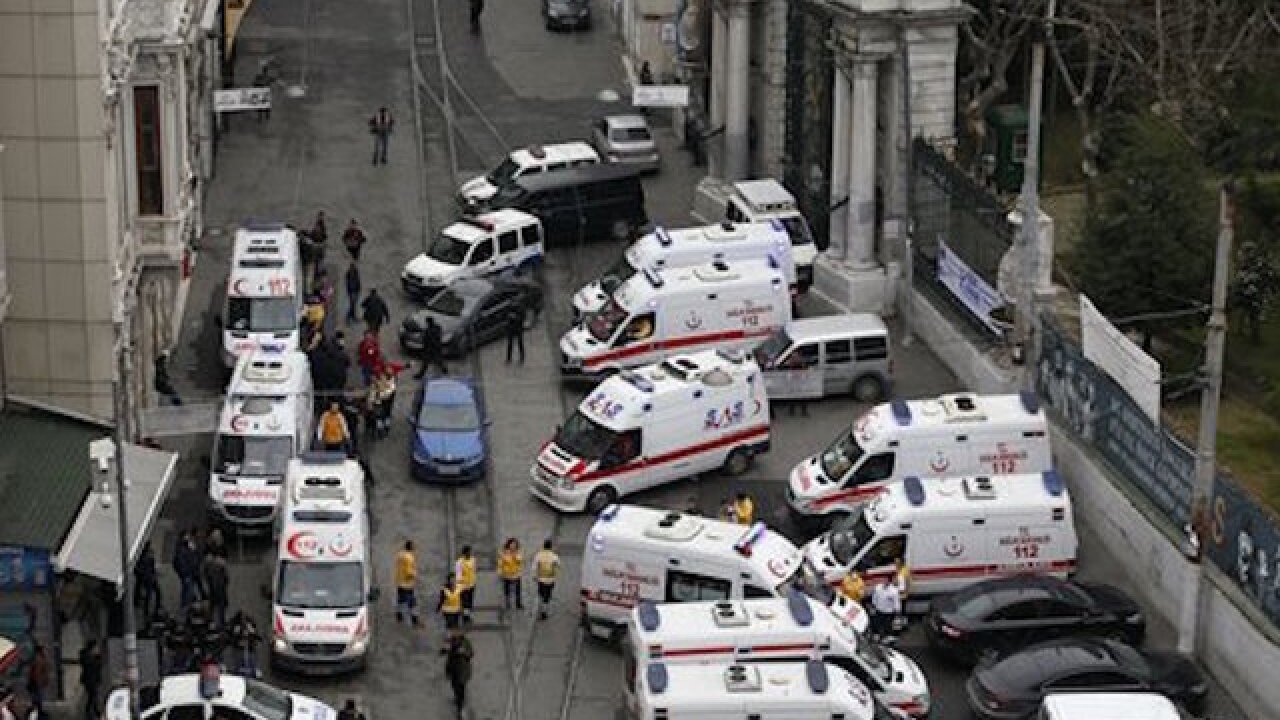 Emrah Gurel
<p>Security officials and ambulances at the scene of an explosion, on a street, in Istanbul, Turkey, Saturday, March 19, 2016. An explosion on Istanbulís main pedestrian shopping street on Saturday has killed a number of people and injured over a dozen others. (AP Photo/Emrah Gurel)</p>

ISTANBUL (AP) — A suicide attack on Istanbul's main pedestrian shopping street Saturday killed five people, including two dual nationality Israeli-Americans and one Iranian citizen, and wounded several dozen others, in the sixth suicide bombing in Turkey in the past year.

Prime Minister Ahmet Davutoglu issued a statement saying there were several foreigners among the victims.

There was no immediate claim of responsibility but suspicion fell on the Islamic State group and on Kurdish militants who have claimed two recent attacks in the capital, Ankara. DNA samples were taken from family members of two possible Islamic State militants who could be the bomber, the private Turkish Dogan news agency reported.

The explosion ripped through Istiklal Street, a popular destination for tourists and locals in a central neighborhood that is home to cafes, restaurants, foreign consulates and a government office. Istanbul Governor Vasip Sahin said there were five fatalities and that investigations were still under way. An interior ministry official said the death toll included the suicide bomber.

Police swiftly sealed off the area as ambulances and a forensic team rushed to the scene after the bombing about 11 a.m. Normally packed cafes were either closed or virtually empty, with business owners making frantic calls to loved ones to assure them of their safety. Rattled tourists wondered where to go.

"It was one loud explosion," said Muhammed Fatur, a Syrian who works at a butcher shop near the scene of the explosion. "Police came to the scene and sealed off the area." The site remained off limits until shortly after sundown when tentative pedestrians and shopkeepers returned to inspect the damage.

"We can sadly confirm that two Israeli civilians were killed and we might have a third fatality," he said.

Israel was cooperating with other intelligence agencies to determine whether the attack was directed at Israelis specifically. Two planes were being sent to Istanbul to evacuate others wounded in the blast.

The majority of the Israelis caught up in the attack were on a culinary tour of the city, officials said. The group had just eaten breakfast nearby when the blast ripped through the street. Israeli media named one of the victims as 60-year-old Simha Damari, a mother of four and said her husband was also wounded in the attack.

Ned Price, a spokesman for the White House National Security Council, confirmed that two American citizens were among those killed in the Istanbul attack. Their identities were not released.

A group of Iranian tourists were also among the victims. Alireza Razmkhah, 45, was killed and his wife, Azan, and baby, Diana, were wounded, according to IRNA, the official Iranian news agency. An elderly woman was also wounded in the attack, but was in stable condition, the agency reported.

The attack coincided with a visit to Turkey by Iranian Foreign Minister Mohammad Javad Zarif. He condemned the "inhumane" act and offered his condolences to Turkey.

Turkey's health minister, Mehmet Muezzinoglu, said the 36 people wounded in the attack included six Israelis, two Irish citizens and one person each from Iceland, Germany, Dubai and Iran. Istanbul's governor later raised the number of injured to 39 and said 24 of them were foreigners, without providing a breakdown by nationalities.

The governor would not confirm media reports that the suicide bomber may have been an Islamic State militant. He said, "The inspection is continuing in a detailed way. It is too early to say anything."

Turkey was already on edge following two recent suicide car bomb attacks in the capital, Ankara, which were claimed by a Kurdish militant group that is an off-shoot of the outlawed Kurdistan Workers' Party, or PKK. The most recent bombing attack, on March 13, targeted bus stops on Ankara's busiest street, killing 37 people including two bombers.

British singer Skin wrote on Facebook that the blast went off near her Istanbul hotel and that buildings "shook like paper." She also expressed solidarity with the "innocent people and their families caught in this evil situation."

Turkey has had heightened security in Ankara and Istanbul in the run-up to the Kurdish spring festival of Newroz on March 21, which Kurds in Turkey traditionally use to assert their ethnic identity and demand greater rights.

NATO's Secretary General Jens Stoltenberg condemned the attack in Istanbul, describing it as "yet another terrorist outrage targeting innocent civilians and our ally Turkey."

In his statement, the White House National Security Council spokesman condemned the "heinous attack" and said the United States remains steadfast in support of Turkey, its NATO ally and partner.

"These repeated acts of terrorism in Turkey must come to an end," Price said. "We are in close touch with Turkish authorities and reaffirm our commitment to work together with Turkey to confront the evil of terrorism."

The Irish foreign and trade minister, Charlie Flanagan, expressed "horror and sadness" at the attack and confirmed that a number of Irish citizens were among the injured.

Video posted on social media apparently capturing the aftermath of the blast showed several motionless bodies lined up at the foot of shuttered shops as a second ambulance arrives at the scene. Footage filmed by a witness showed a severed male head resting next to the street's tramway tracks a few feet away from the bodies.

On Thursday, Germany had closed its embassy in Ankara, the German school in Ankara and the consulate in Istanbul, which is in the same neighborhood as the blast, following a security warning. Twelve German tourists were killed in a January suicide attack in a historic district of Istanbul.

Saturday's explosion marks the sixth suicide attack in the country since July. The previous five attacks, which have killed more than 200 people, were either blamed on the Islamic State group by Turkish authorities or claimed by an off-shoot of the PKK..

The PKK has been fighting for autonomy in southeast Turkey for three decades in a conflict that has killed tens of thousands of people. A two-and-a- half year peace process between the government and the PKK broke down in July, reviving the conflict.

Turkey, which is a partner in the U.S.-led war against the Islamic State, has also been drawn deeper into the Syrian conflict and forced to absorb 2.7 million Syrian refugees. Last August, Turkey began allowing U.S. fighter jets to launch airstrikes from Incirlik air base in southern Turkey.