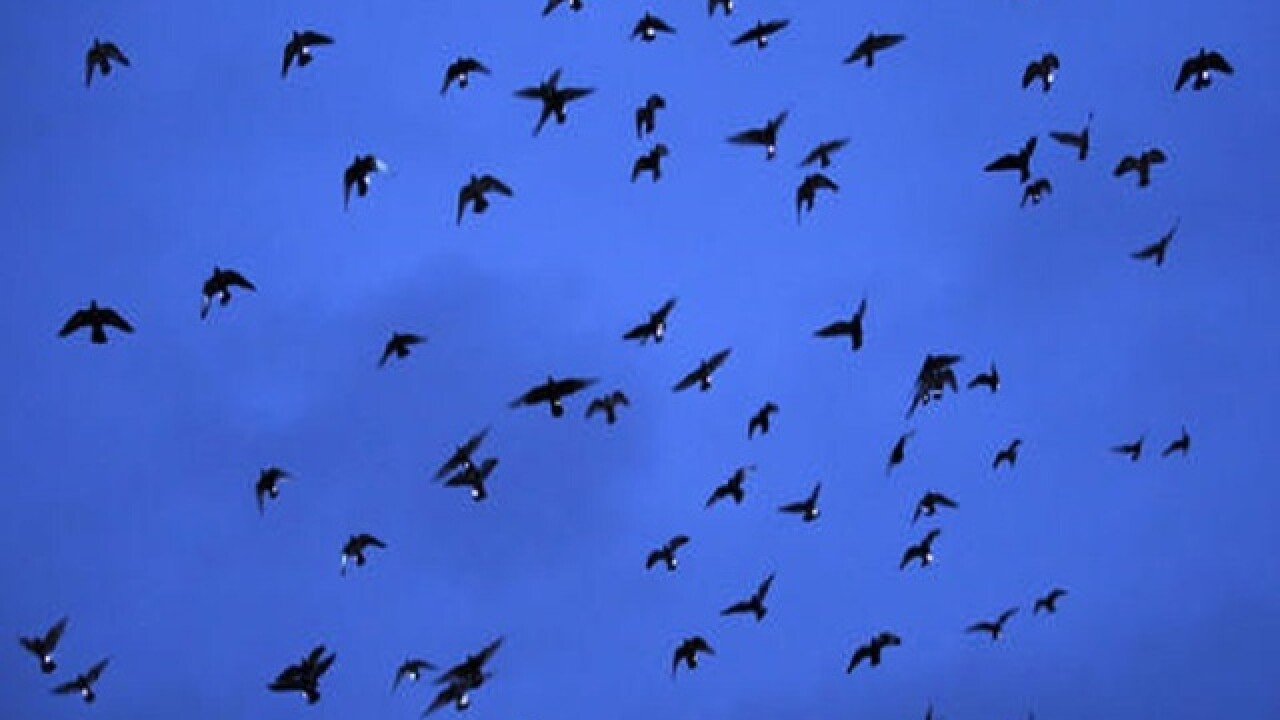 Kathy Willens
<p>Pigeons wearing LED lights fly over the East River after they were released from they coops on board the Baylander, a decommissioned naval ship docked at the Brooklyn Navy Yard, Thursday, May 5, 2016, in New York. The 30-minute performance was part of artist Duke Riley's "Fly By Night" creation. (AP Photo/Kathy Willens)</p>

By: Associated Press
Posted at 7:51 PM, May 05, 2016
NEW YORK (AP) — New York is staging a show with 2,000 pigeons tagged with LED lights illuminating the city's night sky.
For its premiere Thursday, the birds were released at sunset from coops aboard a former aircraft carrier docked at the Brooklyn Navy Yard.
Improvising their own choreography, the flock swooped, twirled and glided through the sky above the East River for the show called "Fly by Night."
"It's almost like this shooting star going across the skyline," said artist Duke Riley, who created the 30-minute spectacle on the Brooklyn waterfront.
LED light bands are attached to a bird's leg and remote-controlled from the Baylander, a decommissioned Navy ship from the Vietnam era.
Spectators lined a grandstand on land, surrounded by taped sounds of birds cooing and flapping their wings as the pigeons perched atop the warship, waiting for the sky to darken.
Then a hush descended on the scene as Riley and several assistants, hollering and blowing whistles, waved garbage bags — simulating hawks — over the vessel to start the flock flying around.
The spectacle, which runs each weekend through June 12, is free of charge but requires online reservations. There's already a waiting list.
Riley selected the Brooklyn Navy Yard for his light show because nearby, on an artificial island, the Navy housed its first messenger-pigeon fleet in the early 20th century.
The project by the 43-year-old artist and Boston native is presented by Creative Time, a New York-based nonprofit that sponsors public art. He says he was inspired for "Fly by Night" after reading an old military manual on training pigeons for night missions.
About two-thirds of the birds were donated by people from New York's pigeon community who were forced to give up their birds because of their housing situations. Others are on loan from friends.
They come in an array of colors, some with silver heads, others with black stripes, and one with a red beak.
Equipping thousands of pigeons with LED lights was a project unto itself — a team effort led by a company called 10xBETA based at the Navy Yard. It took a technician in China to create a pigeon-light circuit. And an American manufacturer made containers for the equipment that volunteers snapped into the leg bands.
The cost of the project was not disclosed.
The show also celebrates the vanishing hobby of keeping pigeons on the rooftops of Brooklyn's historic waterfront. In the 1960s, thousands of people did that, but now, there are fewer than 200 raising pigeons in New York.
When the show is over in June, many of the birds will go to a Brooklyn man who lost hundreds of his pigeons in a fire earlier this year.
It's not the first time Riley has used homing pigeons for his performance art. He says he smuggled cigars from Havana to Key West, Florida, in a 2013 project called "Trading With the Enemy."
"Pigeons suffer a PR problem," said Creative Time curator Meredith Johnson. "People have this sense that they're rats with wings. But pigeons are incredibly complex."
"He wants to bring them out of the shadows," she said of Riley.
Associated Press 2016