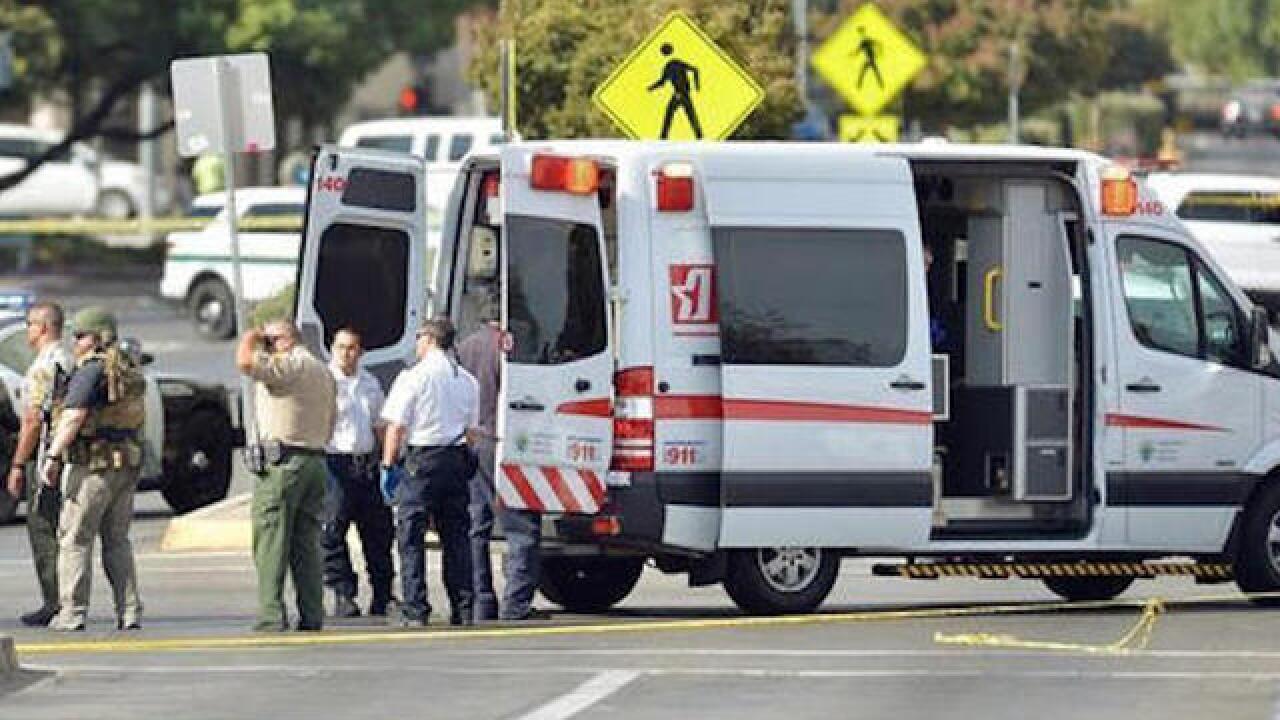 Copyright 2018 Scripps Media, Inc. All rights reserved. This material may not be published, broadcast, rewritten, or redistributed.
Silvia Flores
Fresno County sheriff’s deputies and Fresno police officers stand on scene near an ambulance after reports of an active shooter in the main lobby of the Fresno County Jail in downtown Fresno, Calif., Saturday, Sept. 3, 2016. Authorities say two unarmed officers were seriously wounded after being shot by a visitor. Sheriff Margaret Mims says a man with a long criminal history, identified as Thong Vang, entered the lobby Saturday morning and tried to cut to the head of the visitor line. When confronted, Vang pulled out a gun and started shooting, Mims said. Another officer returned fire and Vang surrendered. (Silvia Flore/Fresno Bee via AP) MANDATORY CREDIT.

By: Associated Press
Posted at 5:55 AM, Sep 04, 2016
FRESNO, Calif. (AP) — A central California jail was examining security measures after an ex-convict shot and wounded two unarmed officers in the lobby, but officials said Sunday that they did not plan any immediate changes.
After reviewing Saturday's shooting that left correctional Officers Juanita Davila and Toamalama Scanlan in critical condition, authorities will decide whether to alter procedures in the public area of the Fresno County jail, sheriff's spokesman Tony Botti said.
Unarmed officers guard the facility and visitors go through metal detectors leading to secure areas, Botti said. The jail lobby is closed but could reopen later Sunday.
Thong Vang, 37, is accused of shooting the officers in the head and neck areas during a struggle and has been booked into jail on suspicion of attempted murder, possessing a handgun as a felon and bringing drugs into a jail. He was placed on a parole hold, Botti said.
Vang was released from prison in 2014 after serving 16 years for raping three girls aged 14 and under, Sheriff Margaret Mims said. He had no criminal violations since his release.
Botti said he didn't know if Vang had an attorney who could comment on his behalf.
Scanlan, who has 10 years of experience, and Davila, an 18-year veteran, approached Vang after he tried to cut to the front of the visitors' line and began pacing near a secure area of the jail.
The officers were trying to get him to sit down when shots rang out. About 15 people, including small children, ran to safety.
Officers inside the jail ran to the lobby, where a lieutenant shot at Vang, who returned fire, Botti said. No one was hit.
Officers tried to subdue Vang with a stun gun, but he would not give up and ran to the hallway of the jail records area, authorities said. When confronted by sheriff's deputies and a Fresno police officer, Vang dropped his weapon and told authorities he wanted to be arrested, Botti said.
The injured officers were dragged out of the lobby and taken to the hospital to undergo surgery. Vang was taken to the hospital for minor scrapes and cuts.
Christy Rodriguez told the Fresno Bee newspaper that she and a woman with a walker hid in the bathroom after they heard the gunshots. Moments later, an officer yelled at them to get out of the building.
"This is crazy. This isn't supposed to happen," Rodriguez said.
Copyright 2016 The Associated Press. All rights reserved. This material may not be published, broadcast, rewritten or redistributed.