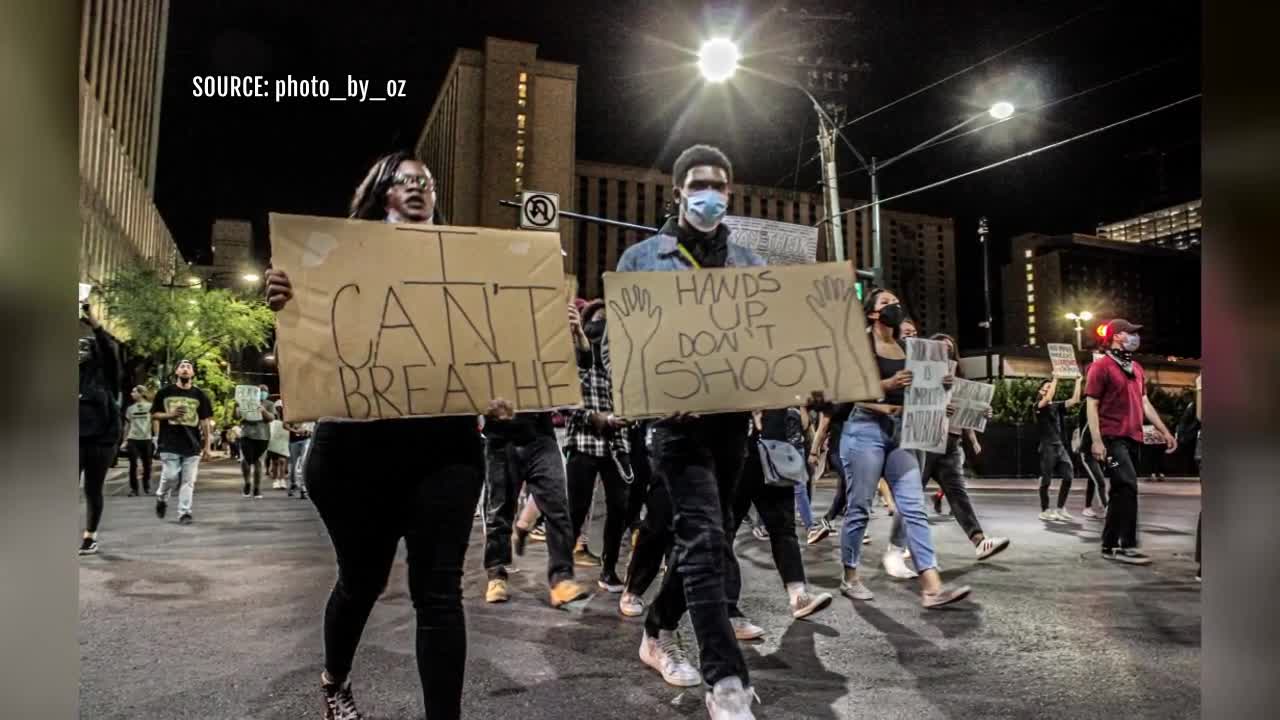 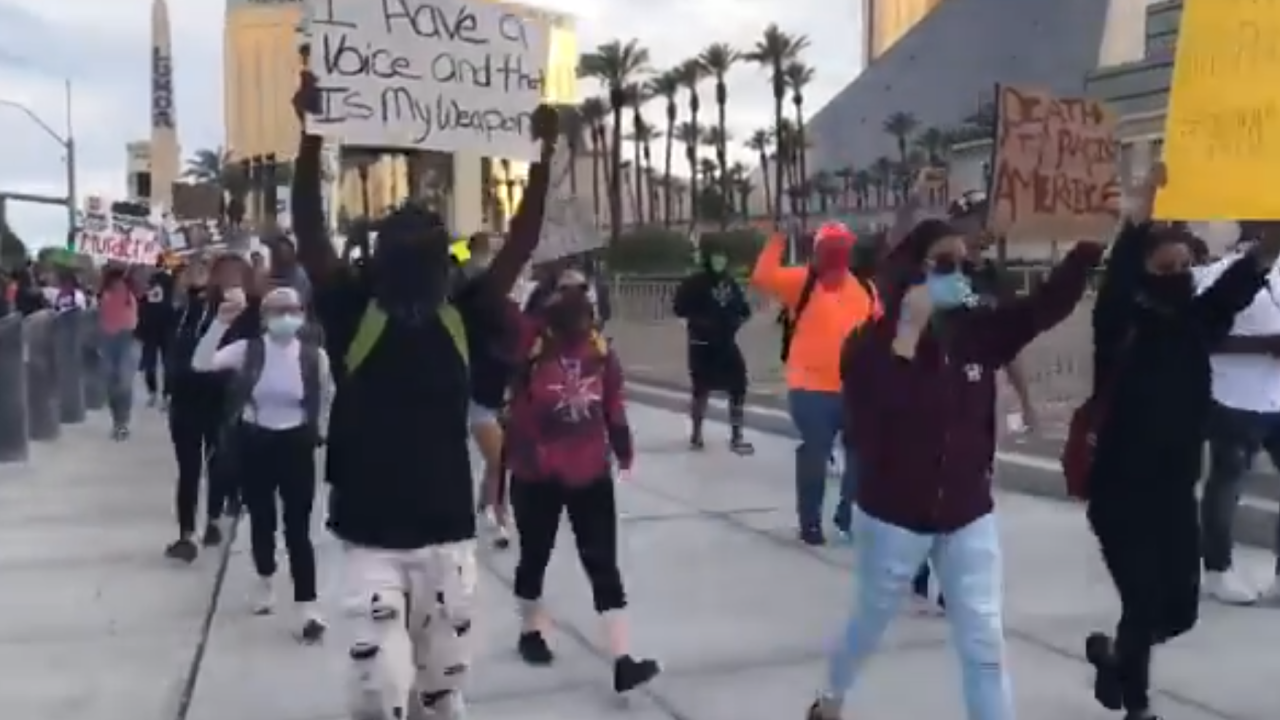 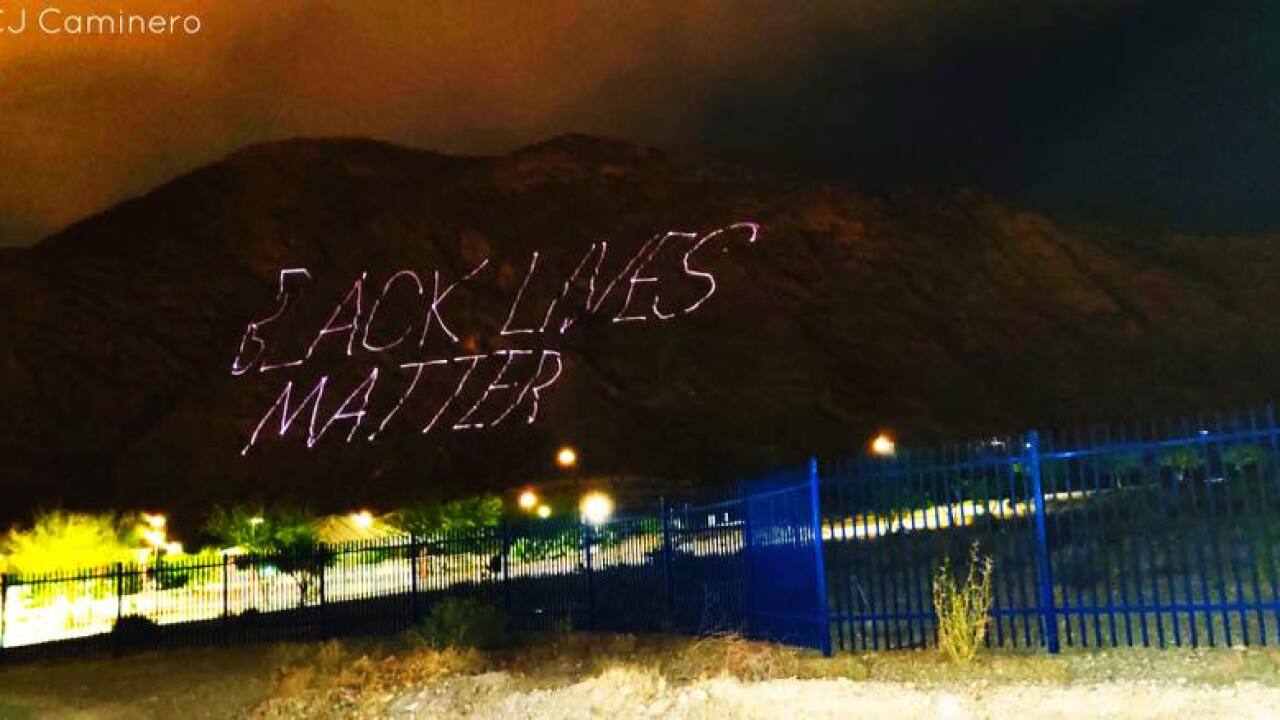 10:45 P.M.
There is police activity in the vicinity of the South Premium Outlet Mall seen from Chopper 13. We are working to confirm with LVMPD if this activity is related to reports of looting.

10:25 P.M.
There are reports of looting at the North Premium Outlet Mall near downtown Las Vegas. Chopper 13 is overhead and sees a person detained by police.

10 P.M.
There is a large police presence at the intersection of Tropicana and Koval Avenues, and a trash can is on fire.

Large police presence at Tropicana and Koval. There appears to be small fire at gas station. Lots of people driving by and yelling at @LVMPD. pic.twitter.com/0QP9c6gMkF

We just had rubber bullets just shot at us. It came without warning. Photographer Kris Oman was hit in the foot. We’re okay. @KTNV

8:46 P.M.
Chopper 13 is over the Las Vegas Strip as protests continue into the night.

8:30 P.M.
There are some protesters and a large police presence at Downtown Summerlin.

7 P.M.
Protesters have made their way from Mandalay Bay north on Las Vegas Boulevard to the intersection at Flamingo Road and are turning around near the Bellagio.

The line of cruisers are passing us now. Protesters are in sight. @KTNV pic.twitter.com/zdBabEjQuZ

5:50 P.M
Protesters are taking a knee in front of Mandalay Bay and chanting George Floyd's name.

Protestors have now taken a knee and are chanting #GeorgeFloyd’s name. @KTNV pic.twitter.com/ZRNJUeeHL3

5:40 P.M.
Protesters have started to arrive in front of Mandalay Bay with signs saying "Black Lives Matters" and other sayings.

The @mayoroflasvegas says if we don’t change our ways, the seeds of hate and resentment will grow for generations. @KTNV pic.twitter.com/wo5eoIoM9S

4:10 P.M.
As protests over the death of George Floyd continue throughout the country, there have been mentions of two protests tonight in Las Vegas, one at Downtown Summerlin at 7 p.m. and one at Mandalay Bay at 5 p.m.

Downtown Summerlin has sent out a statement on twitter that they have closed early today at 4 p.m.

This is a developing story, check back regularly for updates.