The Las Vegas Victims' Fund will begin distribution of more than $31.4 million to 1 October victims on March 5.

The Las Vegas Victims' Fund will begin distribution of more than $31.4 million to 1 October victims on March 5.

Contributions from individuals ranged from $1 to almost $400,000.  Other examples of generosity included the students, faculty and staff of Green Valley High School raising more than $66,000 through T-shirt sales, Allegiant Air’s employees and executive management team contributing more than $362,000 through the contribution of paid leave and matching funds, Zappos matching contributions of more than $1 million, and the Vegas Strong benefit concert at T-Mobile Arena raising nearly $700,000.

The total amount contributed to the fund includes contributions made to other funds, such as the Direct Impact Fund and the National Compassion Fund, which were merged into the Las Vegas Victims' Fund.

Also, the Las Vegas Victims’ Fund Committee announced Friday approval by the fund's board of a plan for the allocation of the donated funds.  The plan allocates the $31.4 million among 532 claimants in the categories identified in the Final Protocol, which can be found here. The rolling distribution of the funds will begin on March 5 and will be completed by the end of the month.

$275,000 will be paid to the families of the 58 people killed, along with10 other people who were paralyzed or suffered permanent brain damage, according to a chart released by the Las Vegas Victims' Fund. The nonprofit posted a chart projecting payments on a sliding scale to a total of 532 people, including 147 who were hospitalized.

The committee, comprised of victim advocates, mental health and medical professionals, lawyers, major donors, and other citizens held two town hall meetings to listen to those impacted by 1 October and met nine times to develop the Final Protocol and approve the allocation plan. The Committee also reviewed more than 1,600 email and written comments and received advice from national experts, including victim compensation expert Kenneth Feinberg and the National Center for Victims of Crime.

The number of claimants receiving funds from the LVVF will be more than double the number of people who received distributions from either the OneOrlando Fund (259) or The One Fund Boston (232). 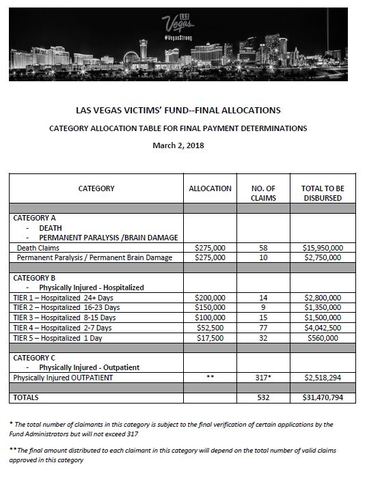