UPDATE: Las Vegas is NOT the 4th worst city to live in

JUNE 11 UPDATE: You’ll be relieved to know, Las Vegas is NOT the 4th worst city to live in.

We recently published the below article after receiving information about a troublesome new ranking. According to an 24/7 Wall St., Las Vegas was ranked as the 4th worst city to live in primarily because of a high crime rate.

It sounded a little wonky to us but we went with it. We admit that was a mistake. However, it seems like we’ve had an unusually high number of homicides lately and we certainly hear about a lot of property crime. Just check out our interactive murder map and this recent story about a trailer with a family’s motorcycles and ATV being stolen right out of their driveway. We were willing to believe the information. After all, 24/7 Wall St. has provided information to many of the largest newspapers and TV stations in the nation and we’ve never had an issue with their material before.

The story we published went viral. It’s been read and shared thousands of times. It also received hundreds of comments. Many of those comments were from victims of crimes who also believed the ranking.

There were quite a few of you though who did not. Some of you pointed it out on social media. A few of you sent us (me in particular) not-so-nice emails.

Not everyone was quite so harsh though. RE agent and “sometimes cartographer” Jim Donohue also emailed us and was very helpful in tracking down the correct information. For that, we are grateful.

We contacted 24/7 Wall St. and explained our concerns. Finally, after a few days, we received this email.

I am writing to you in regards to the story you wrote about the 24/7 Wall Street article in which Las Vegas was listed as the “4th worst city to live in.” 24/7 Wall Street experienced a data processing error and has updated the list without Las Vegas on it. Las Vegas is not included in the list at all now. Please see attached link: https://www.google.com/amp/s/247wallst.com/special-report/2018/06/10/50-worst-cities-to-live-in-3/amp/

The story needs to be corrected or a new story written as it is now completely inaccurate. Thank you.

And, if you look at the story, there has been a correction added. 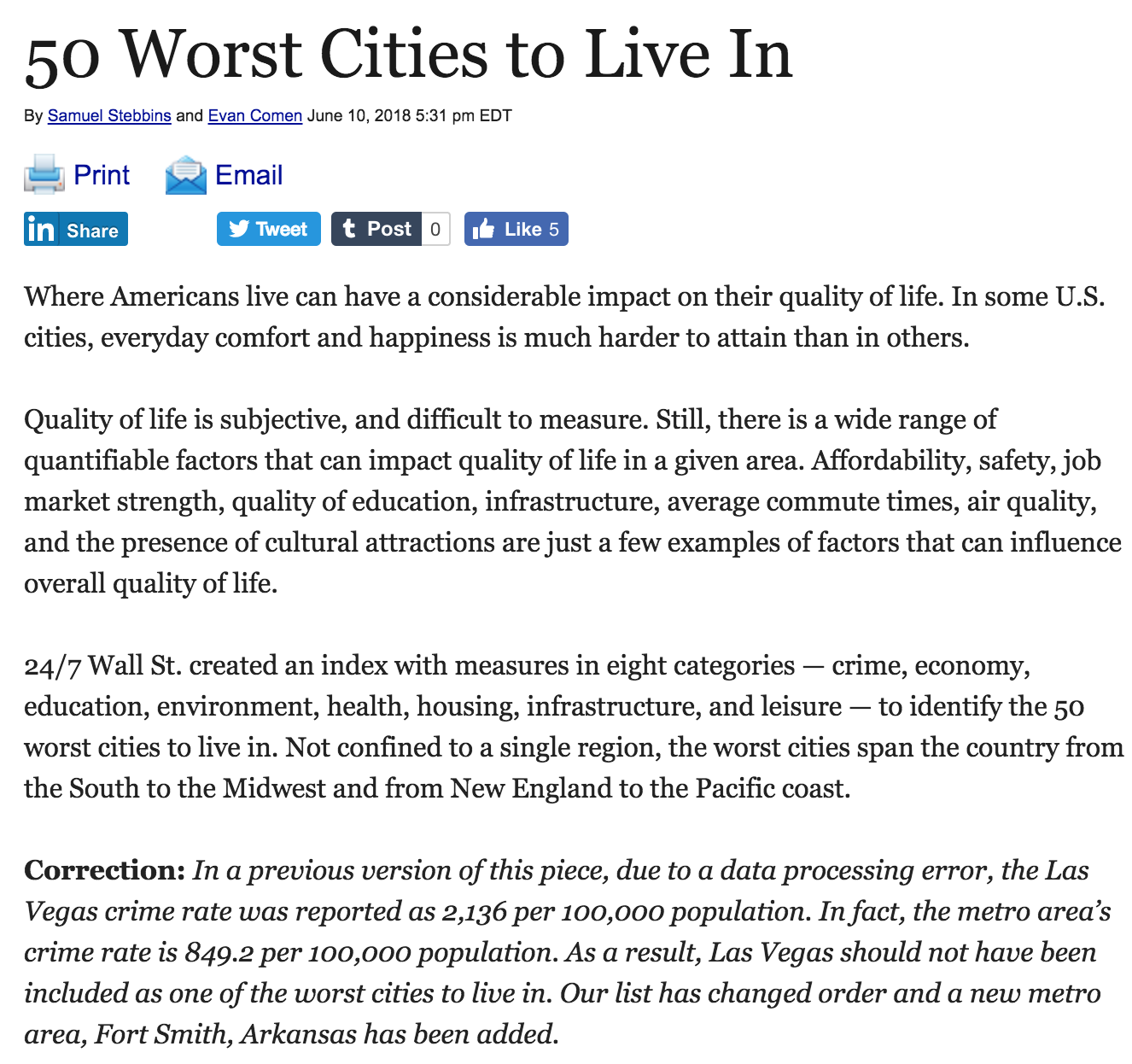 We should have checked the math ourselves. We admit that. It can be difficult when you hear (as a journalist) about so much bad news day after day not to believe the worst. We (and that means me) need to try and remember there is a lot of good in Las Vegas and everywhere else. We hope you can forgive us and be assured that we will be more skeptical in the future.

Sadly, Las Vegas did not fare so well. In fact, it was named the 4th worst city to live in.

The worst 5 cities are:

Apparently, Las Vegas was ranked so low because of the amount of crime, especially violent crime. 24/7 Wall St. says that there were 2,136 violent crimes (assault, robbery, rape and murder) for every 100,000 Las Vegas residents in 2016. Property crime (larceny, burglary and motor vehicle theft) is also a big problem. There were 7,258 property crimes for every 100K residents in 2016.

That there were only 5 other cities in the nation in 2016 that had more crimes. 24/7 Wall St. goes on to say that with lower crime rates, Las Vegas probably would not have made the worst cities list at all.