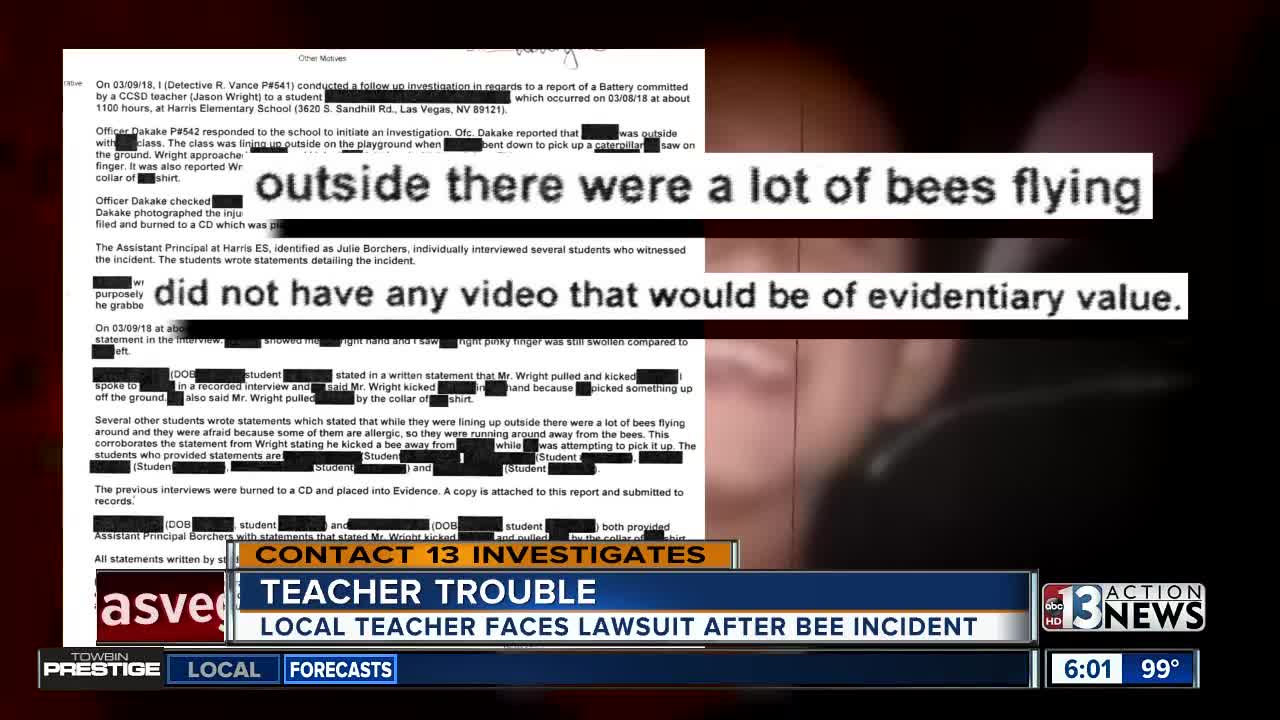 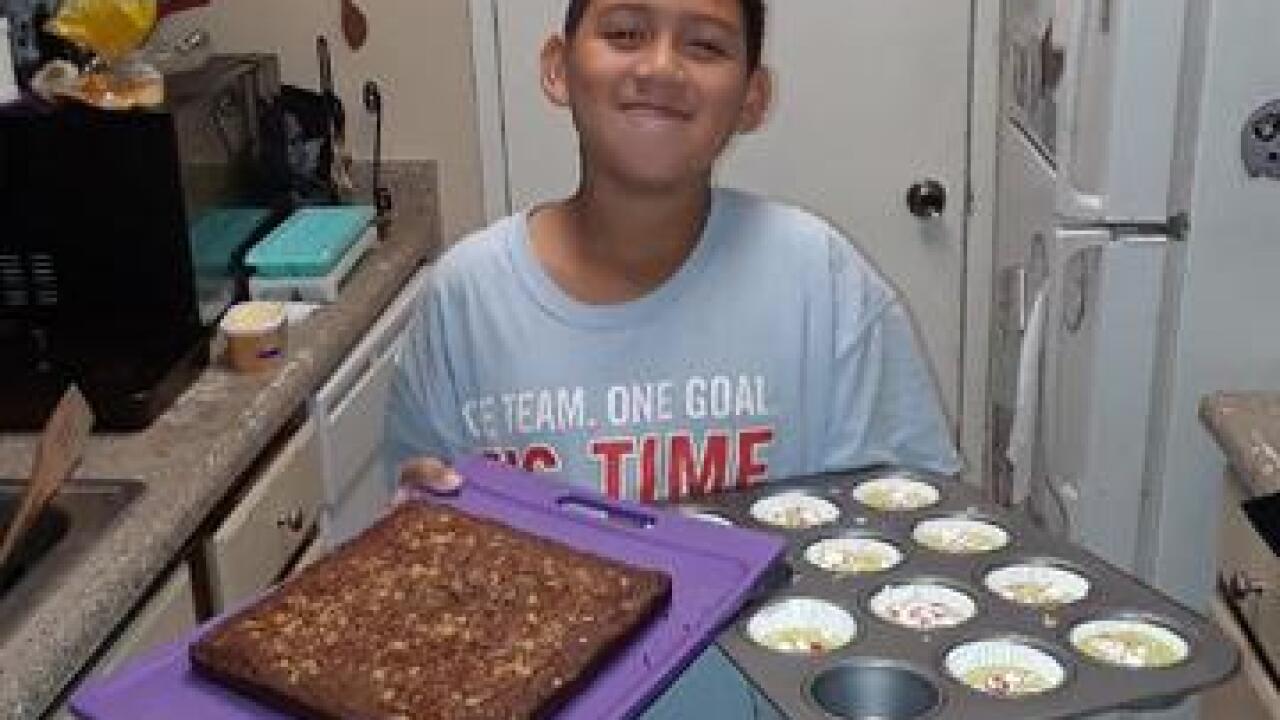 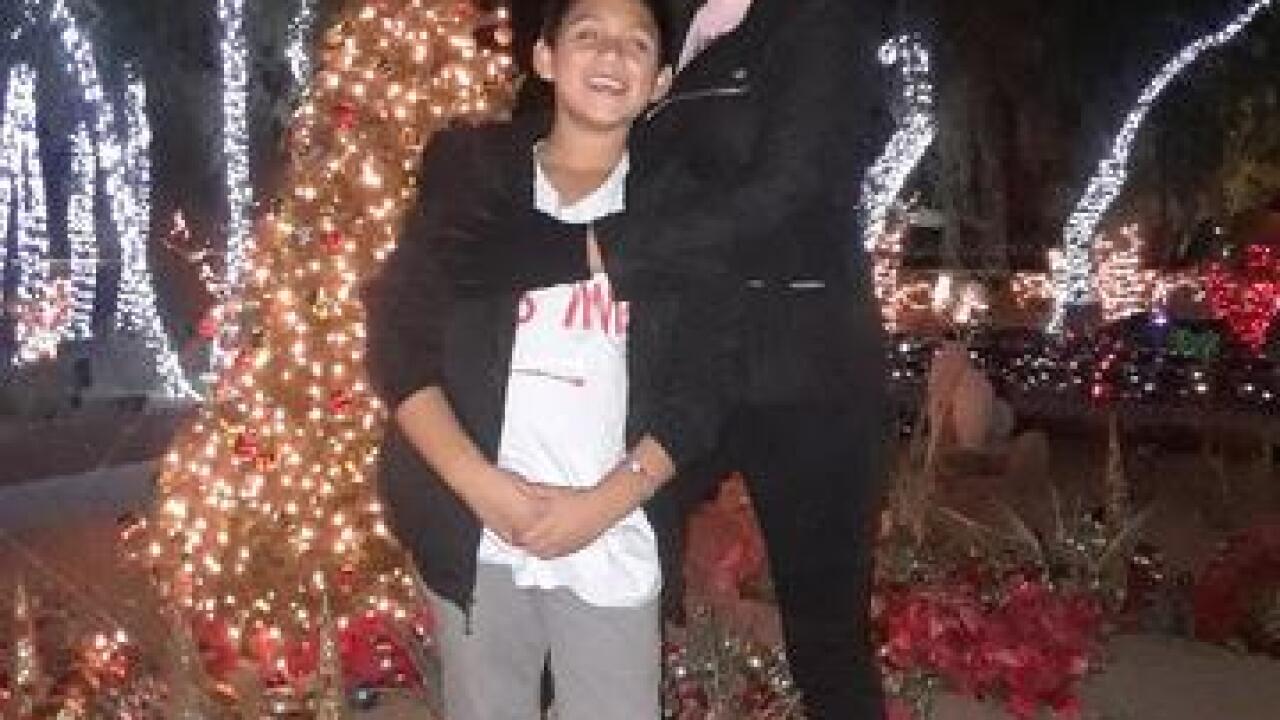 A Henderson teacher and the Clark County School District are facing a civil lawsuit alleging a student was injured after his teacher kicked him during a bee sighting.

Teacher Jason Wright, and husband of Clark County School Board President Deanna Wright, has been named in the incident that occurred at Harris Elementary in March 2018.

According to the police report obtained by Contact 13, Wright said he was having trouble controlling his "raucous" class and decided his students needed some time outside to settle down.

While his class 'practiced lining up," Wright said multiple students were screaming and distracted by some nearby bees. Wright said he became aware that student, Jayden Zelaya, was attempting to pick up a bee.

Through the statement he provided to police, Wright said "I quickly moved to Jayden's position. I swiftly intervened with my left foot to move his hand out of the way to protect Jayden from being stung by a bee."

Wright told investigators Jayden has been known to have trouble controlling himself in class and speaking out of turn.

"With this last incident, he literally assaulted by grandson," said Laura Porras.

Porras says she received a phone call from the school alerting her to the incident and she responded.

Porras adds she had been called to the school multiple times due to issues with her grandson's teacher.

"We got police involved and the school police officer was pretty upset," Porras recalled.

"He said, if it was his child, he would probably take action as well," added Porras.

According to the report, investigators questioned multiple students who reported they witnessed Wright kick Jayden.

After the incident, Jayden told police Wright "grabbed the neck area of his shirt and stretched it out," the report shows.

"During the investigation, the school police were talking to all of the other students that came forward," said Porras.

"[Investigators] spoke to them separately, and they all told the same story." said Porras.

The report concludes that students reported bees in the area at the time but since there was no helpful video evidence and no clear evidence Wright had 'malicious intent' the battery charge was unfounded.

Contact 13 also obtained a notice from Clark County Child Protective Services which also looked into the incident and found the battery claims to be 'unsubstantiated."

"I'm not looking for a dime," said Porras.

"I want this man removed from teaching, he doesn't need to be around children," added Porras.

Contact 13 made attempts to get Wright's side of the situation and approached him at his home.

A spokesperson for the Clark County School District says the district will not comment on pending litigation.

Jayden was removed from the Clark County School District and resides in California. Porras says her grandson is undergoing counseling after the incident.

Wright was moved from Harris Elementary near Desert Inn and Sandhill Roads and currently teaches at Nate Mack Elementary School near Warm Springs and Pecos Roads.