How much of the total solar eclipse will we see in Las Vegas?

Copyright 2017 Scripps Media, Inc. All rights reserved. This material may not be published, broadcast, rewritten, or redistributed.
NASA

There have been a lot of stories and lists like "15 best places to watch the total solar eclipse across the US," but what exactly are we going to be able to see in Las Vegas on Aug. 21?

Well, we aren't going to see the total solar eclipse. However, we will be able to see a partial eclipse and that is still pretty cool.

WHAT WILL IT LOOK LIKE IN YOUR ZIP CODE? FIND OUT

Hopefully, we'll have good weather for viewing the partial eclipse. August averages 22 clear days, 7 partly-cloudy days and 3 cloudy days (based on 1981-2010 climatology). However, it will still be monsoon season and anything can happen.

The last time a total solar eclipse swept the whole width of the United States was in 1918. The eclipse on Aug. 21 will begin near Lincoln City, Oregon, and the path will be 60 to 70 miles wide.

Another total solar eclipse will take place in 2019. But, you'll have to be below the equator then to even catch a glimpse. So, you'll definitely want to be ready on Aug. 21. It might be the closest you ever get to a total solar eclipse.

And don't forget that  even though it will not be a total solar eclipse for Nevada, it is still important to wear eye protection during the event if you are planning on looking straight at the sun. 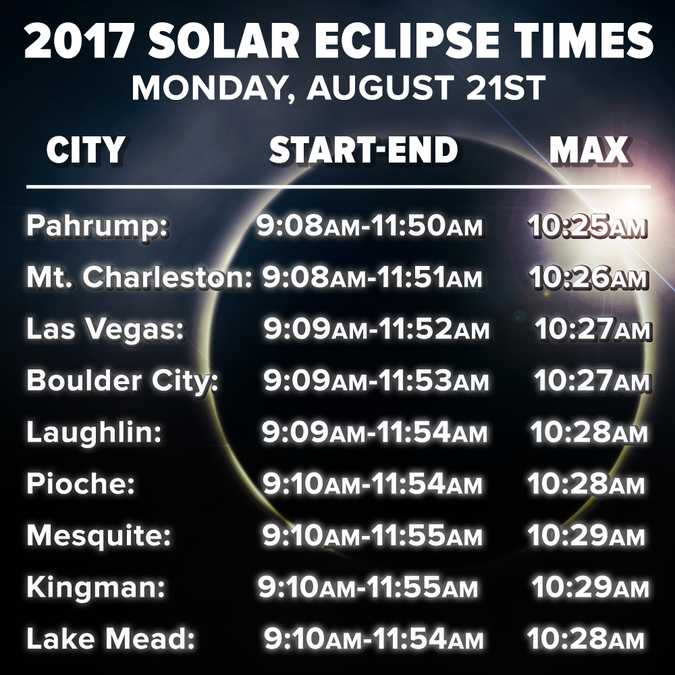