High school bathrooms across US will soon have e-cigarette warnings 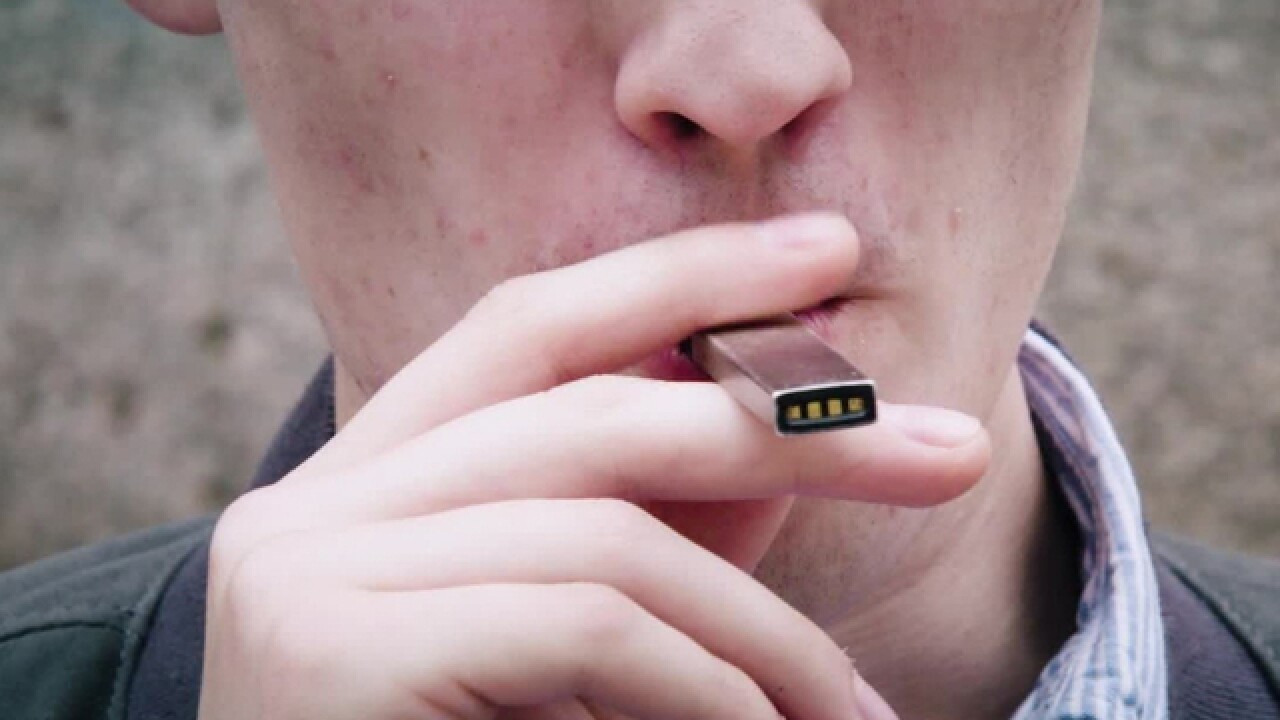 The US Food and Drug Administration will stage a massive education campaign aimed at the nearly 10.7 million teens at risk for e-cigarette use and potential addiction, the agency said Tuesday.

For the first time, the agency will take the message that vaping is dangerous into high school bathrooms and social media feeds of those at-risk youth to stop what the FDA calls an epidemic of e-cigarette use by minors.

The trend was flagged in a 2016 report from the US surgeon general, which cited a 900% increase in e-cigarette use by high school students between 2011 to 2015.

"We're in possession of data that shows a disturbingly sharp rise in the number of teens using e-cigarettes in just the last year," FDA Commissioner Dr. Scott Gottlieb said. "In short, there's no good news."

While applauding the FDA's move, Linda Richter, director of policy research and analysis for the nonprofit Center on Addiction, said that if the agency had taken action when the trend was first identified, "we probably could have avoided the surge in the use of child-friendly, high-dose nicotine products that we're now seeing among kids as young as 12 years old."

"Today's teens were on the cusp of being the first generation to broadly reject cigarette smoking but instead have become hooked on nicotine due to a decade of lax oversight over e-cigarette products," she added.

The dangers of e-cigarettes

E-cigarettes work by heating a pure liquid called e-juice -- composed of flavorings, propylene glycol, glycerin and often nicotine -- until it vaporizes. Popular flavors like tutti frutti, cotton candy and sour gummy worms have attracted younger users to e-cigarettes, which now often look like USB devices that are easy to hide and use without detection.

Recent studies have shown that e-cigarettes are a direct gateway to traditional cigarettes and have a number of health issues beside the addictive properties of nicotine. A study in the journal Pediatrics, for example, found five cancer-causing toxins in the urine of 16-year-olds who inhaled e-cigarette vapor.

"No youth should ever use e-cigs," Surgeon General Dr. Jerome Adams said in a video during Tuesday's announcement. "We must make it crystal clear that e-cigarette use can expose them to dangerous chemicals that can cause lung damage when inhaled."

Bathrooms are a first for FDA

The new campaign is an extension of the The Real Cost Youth E-Cigarette Prevention Campaign, which the FDA says is a nearly $60 million effort funded by fees from the tobacco industry.

The campaign will launch on digital sites and social media platforms popular with young people, such as YouTube, Facebook and Spotify, with videos that show disturbing pictures of damaged lungs and zombie-like students with vaping products glued to their mouths.

In addition, the campaign will place posters in the bathrooms of at least 10,000 high schools across the country, the first time the FDA has placed ads in bathrooms.

"For the first time ever, we are bringing the campaign into high schools to the point of contact where they are doing the behavior," said Kathy Crosby, who directs the Office of Health Communication and Education at the FDA's Center for Tobacco Products.

In addition, she said, the ads will be on school education platforms such as where teens check their grades or sports scores.

"Flavored vape juice may not be as sweet as it sounds," one video says as the strawberries on the screen rot into dry fungus.

"Strangely enough, some students come in here to put crap into their bodies," one bathroom poster reads.

The need for this aggressive approach, Center for Tobacco Products Director Mitch Zeller said, is due to the fact that while young people may never consider smoking a cigarette, "about 80% of youth see no problem in the use of e-cigarettes."

More startling, Crosby added, is that use is growing because teens are encouraging their friends to use e-cigarettes, a behavior officials have not seen for years with tobacco products.

The campaign used focus-group testing with young people to maximize the impact of the ads, Zeller said. The testing found that highlighting specific health messages such as chemicals and dangers was more effective than a general message that vaping is bad.

"Vaping can put dangerous chemicals, like diacetyl, into your lungs," one poster says.

"Vaping can deliver nicotine to your brain, reprogramming you to crave more and more," another reads.

"The stalls may have #1 and #2," another bathroom poster says, "but vapes may have #24, #28, and #82." The small print beneath explains, "Vapers can inhale toxic metals into their lungs -- like these from the periodic table: chromium, nickel, and lead."

Richter said it might be more effective "if the target audience included kids younger than 12, since many 12-year-olds already are vaping," adding that the message should also be presented by trusted teachers and other peer and adult role models.

Matthew Myers, president of the nonprofit Campaign for Tobacco-Free Kids, said, "I think the ad campaign is extraordinarily positive and courageous for the federal government, and it will make some difference. But the vaping industry has used a deadly marketing campaign combining kid-enticing flavors and marketing on social media that has also been very effective.

"Voluntary action by companies has never been a solution," he added, "and the FDA must prohibit their social media marketing and crack down on the use of flavors."

Gottlieb pledged Tuesday to do more, referencing warning letters sent last week to more than 1,300 retailers that illegally sold Juul and other e-cigarettes to minors.

At that time, the FDA also gave e-cigarette manufacturers 60 days to show how they'll keep the devices out of the hands of young people or face regulatory action.

"I am meeting with largest manufacturers myself, and I won't stop until this problem is solved," Gottlieb said. "It may be the most important thing I do in my time as commissioner."