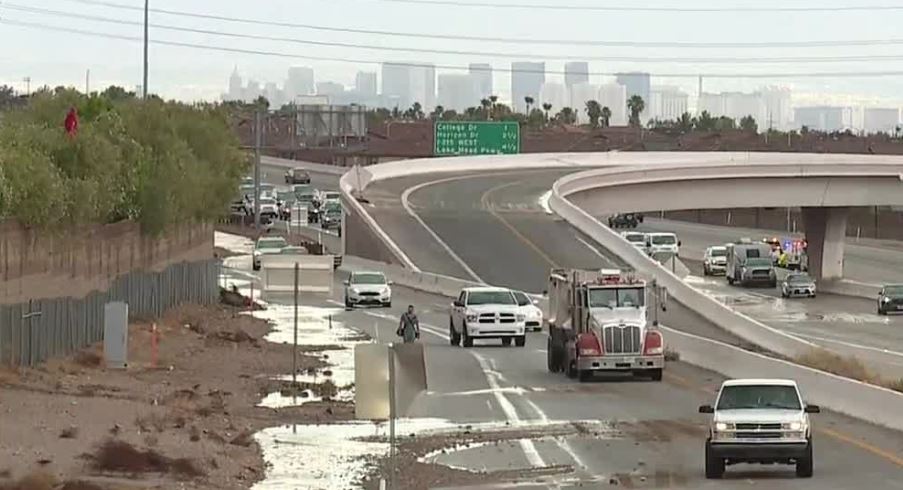 Southbound U.S. 95 was closed for hours as a result of flooding. 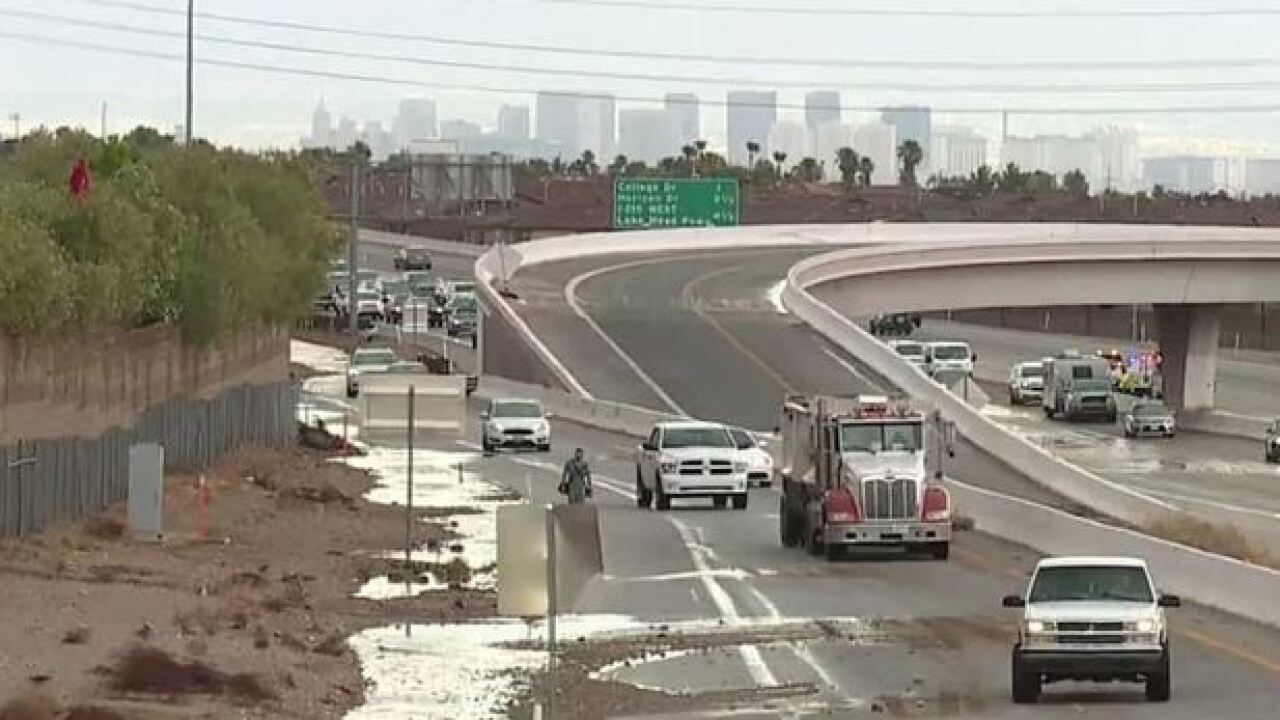 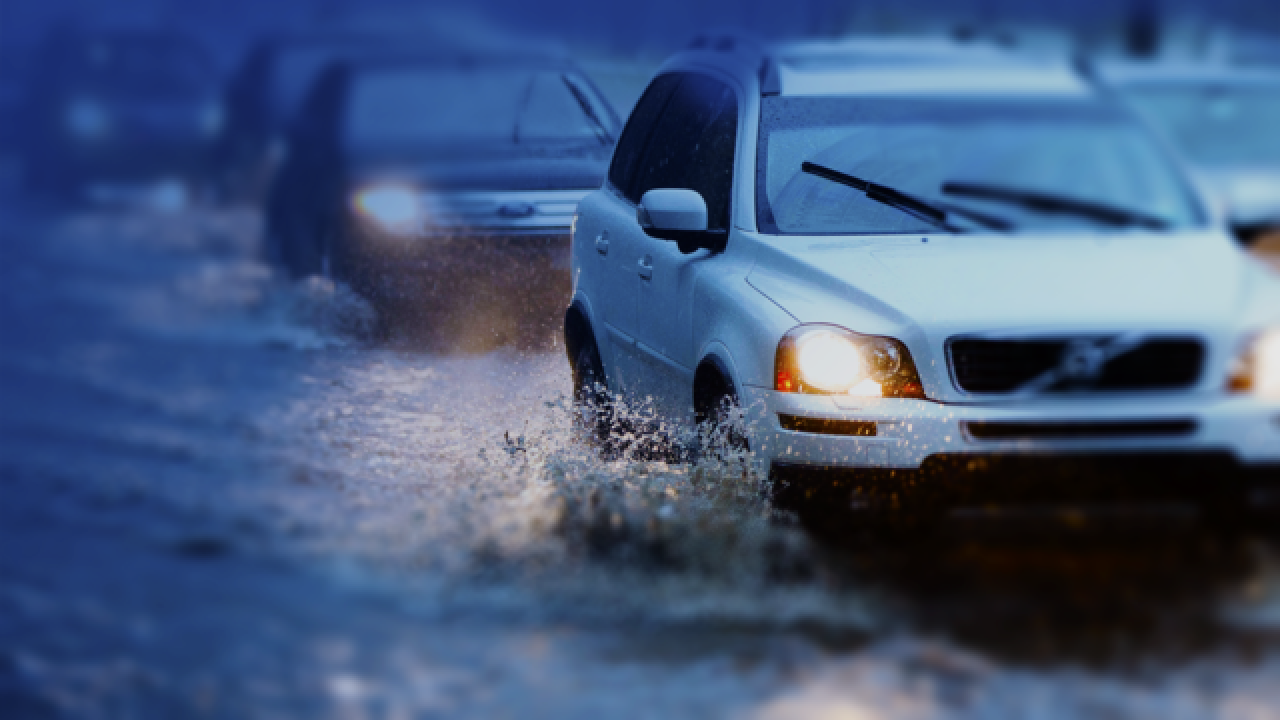 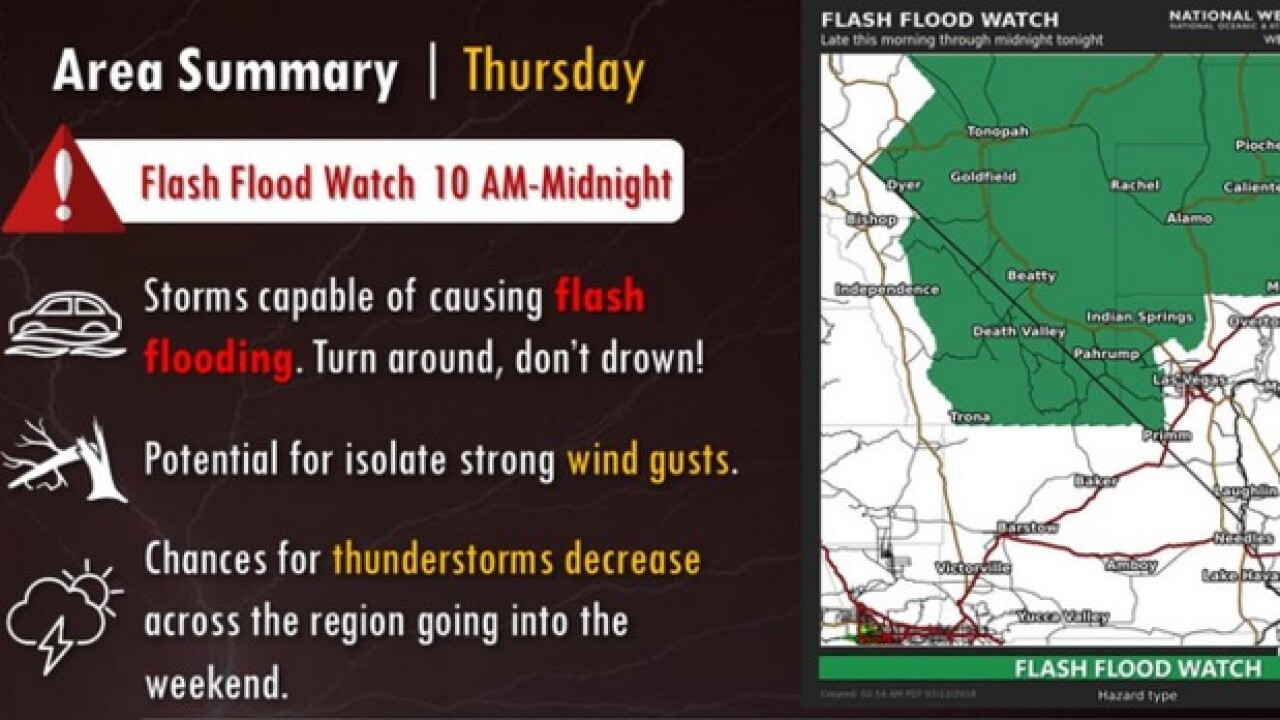 Flooding on SR-158/Deer Creek Hwy, closing the roadway in both directions between SR-156 and SR-157 in Clark County. Use other routes.

UPDATE 3:20 P.M.: Southbound U.S. 95 in Henderson has reopened after it flooded earlier.

*CLEARED* Road Closed - I-515 southbound at College Drive in Henderson
Use Other Routes. https://t.co/xDLCLYbPwy

UPDATE 2:45 P.M.: A flash flood warning has been issued for central Clark County and Mohave County through 5 p.m., including areas of the Colorado River valley.

UPDATE 1:20 P.M.: Departing flights are now delayed as much as two hours at McCarran International Airport, while arriving flights are experiencing delays up to 15 minutes.

UPDATE 12:50 P.M.: A flash flood warning has been issued for Red Rock Canyon, Blue Diamond and Mountain Springs through 3:45 p.m.

UPDATE 12:30 P.M.: The delays at McCarran International Airport has increased to at least 45 minutes.

In addition, southbound U.S. 95 is closed near College Drive due to flooding.

Road Closed - I-515 southbound at College Drive in Henderson
Use Other Routes. https://t.co/xDLCLYbPwy


UPDATE NOON: McCarran International Airport is reporting delays between 15 and 30 minutes due to weather.

Stuck on a plane in Phoenix on the way home from #AKABoule2018. Flight attendants say we are delayed at least an hour due to weather in Las Vegas. https://t.co/CUVgGIOYsZ

The National Weather Service is also tweeting that there is flooding near Wagonwheel Road and Interstate 515.

12:07pm - Wagonwheel Rd on-ramp to I-515 and associated frontage road are currently flooded. Do not drive through flooded waters. #vegasweather #nvwx @cityofhenderson pic.twitter.com/lDbvemgf0t

The flash flood warning is in effect through 3 p.m. Some locations experiencing flooding include Henderson, Boulder City, Lake Las Vegas and Railroad Pass.

UPDATE 11:55 A.M.: Heavy rain is being reported in the Henderson area.

We've got downpours and the threat of lightning around Anthem and Seven Hills, and it's pouring buckets from far southern Henderson toward Boulder City. Slow-moving storms will mean lots of rain for some neighborhoods and nothing for others. https://t.co/vMVGM2gmQS pic.twitter.com/Zt1ECpKdqE

They say today's storms have the capability of producing significant flash flooding.

⚠️⛈️FLASH FLOOD WATCH will be in effect late this morning thru midnight tonight. Today's storms will be capable of producing significant flash flooding. Stay tuned into the weather and have a backup plan in case a flash flood strikes! #TurnAroundDontDrown #cawx #azwx #nvwx pic.twitter.com/fELbSh7gJt

Scattered storms are expected in the mountains after 10 a.m. and could develop in Las Vegas by midday.

This afternoon brings a few more isolated storms and highs in the upper 90s.