In his first speech as President-elect, Joe Biden pledged to bridge the political divide across the country. 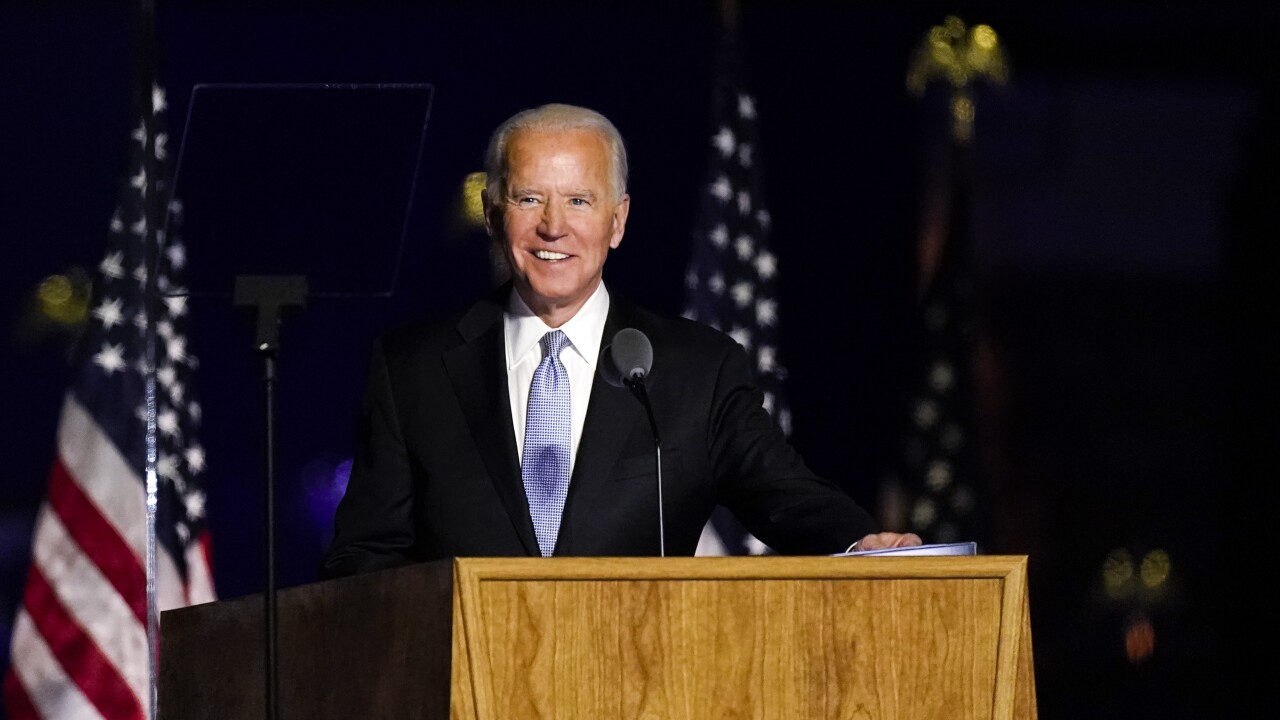 WASHINGTON, D.C. – Joe Biden is projected to win the presidential election and become the 46th president of the United States, according to The Associated Press.

The win is historical in several ways. At 77 years old, Biden is now the oldest president-elect in U.S. history. The defeat over President Donald Trump also marks the first time an incumbent president has lost in the U.S. since George H.W. Bush was ousted by Bill Clinton in 1992.

Biden's running mate, Sen. Kamala Harris, will also become the first female vice president in the nation's history, as well as the first African American VP and the first person of South Asian descent to hold the office.

“Don’t tell me it’s not possible in the United States. It’s long overdue,” President-elect Biden said Saturday night of electing Kamala Harris as Vice President. “Once again, America has bent the arc of the universe more toward justice."

“America’s democracy is not guaranteed, it is only as strong as our will to fight for it, to guard it, and never take it for granted," said Vice President-Elect Kamala Harris.

She also had a strong message for women and girls who were watching.

"While I may be the first woman in this office, I will not be the last," Harris said.

Biden's win in Pennsylvania put him over the 270 threshold and less than an our later, the AP projected he would also win Nevada, bringing him to a total of 290 electoral votes.

Along with the Keystone State, Biden was able to pull Michigan and Wisconsin back into the Democrats’ corner after the party lost the upper Midwest states known as the “blue wall” in the 2016 presidential election.

Saturday night, Biden had a message of unity and said he would focus on bringing the country together in his time in office.

"To make progress, we have to stop treating our opponents as our enemies. They are not our enemies, they are Americans," President-elect Biden said. “I’ll work as hard for those who didn’t vote for me as those who did.”

He added, "We have an opportunity to defeat despair," and said there is nothing Americans have "tried that we cannot accomplish."

Biden released the following statement about his projected win:

"I am honored and humbled by the trust the American people have placed in me and in Vice President-elect Harris.

In the face of unprecedented obstacles, a record number of Americans voted. Proving once again, that democracy beats deep in the heart of America.

With the campaign over, it’s time to put the anger and the harsh rhetoric behind us and come together as a nation.

It’s time for America to unite. And to heal.

We are the United States of America. And there’s nothing we can’t do, if we do it together."

Though Biden is the projected winner, President Donald Trump has signaled that he won’t walk away from the White House without a fight. Trump’s campaign has filed lawsuits in multiple swing states in attempt to stop votes from being counted and they’ll request a recount in Wisconsin. Though, many of those lawsuits have been dismissed.

Shortly after the race was called for Biden, Trump released a statement, in which he claims "this election is far from over" and said his team will continue its legal fight.

“Beginning Monday, our campaign will start prosecuting our case in court to ensure election laws are fully upheld and the rightful winner is seated," said the president in part. "The American People are entitled to an honest election: that means counting all legal ballots, and not counting any illegal ballots. This is the only way to ensure the public has full confidence in our election."