Denver deputies disciplined after calling in sick, getting caught on trip to Las Vegas

Saturday Work Program had to be canceled 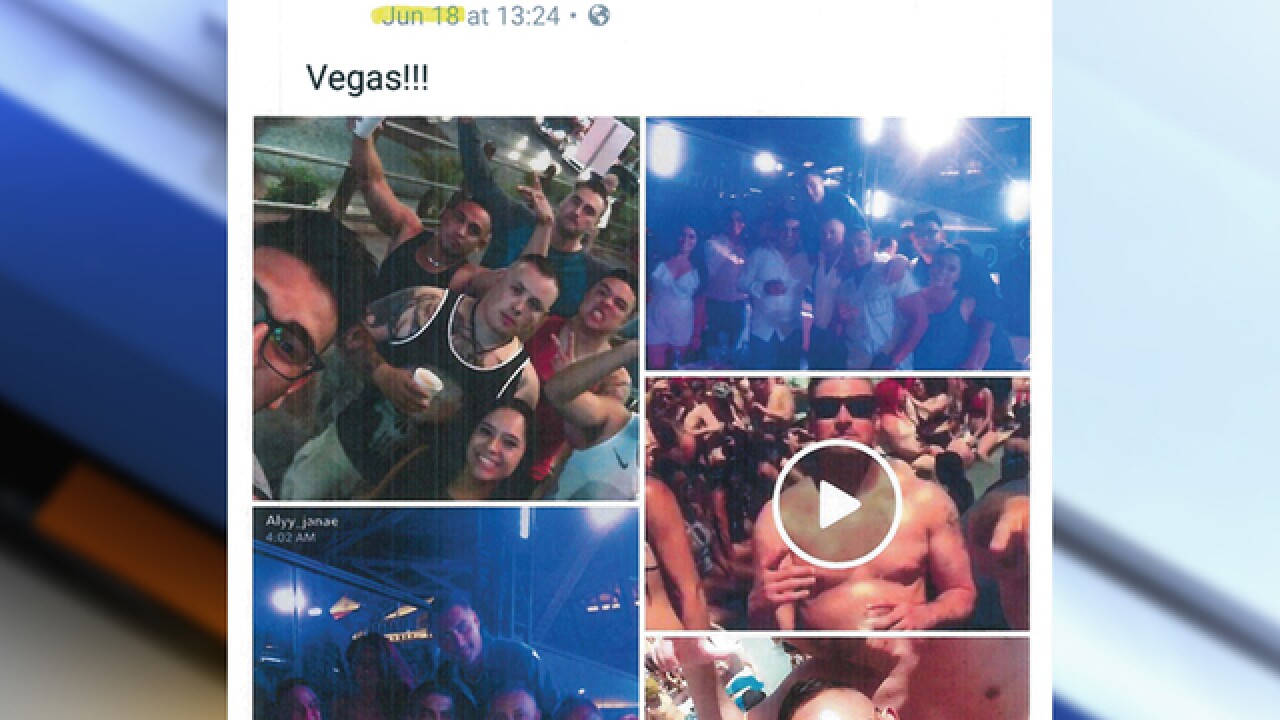 Copyright 2018 Scripps Media, Inc. All rights reserved. This material may not be published, broadcast, rewritten, or redistributed.
<p>Two Denver sheriff’s deputies are in hot water after calling in sick while on a trip to Las Vegas this summer, Contact7 Investigates has learned. (Image: Via public records request from Denver Sheriff Department)</p>

DENVER – Two Denver sheriff’s deputies are in hot water after calling in sick while on a trip to Las Vegas last summer.

An anonymous complaint tipped off supervisors that Deputy Daniel Trujillo and Deputy Diego Villalpando-Hernandez were playing hooky, according to records. The complaint included a post on social media with photos and a caption indicating the two deputies were among a group of people on the Las Vegas strip on June 18, 2017.

Both men had called in sick to their jobs in Denver.

The issue took greater importance because Deputy Villalpando-Hernandez worked on the Saturday Work Program, which allows some court defendants to do community service activities such as cleaning the courthouse and cleaning transport vans, rather than going to jail.

When Villalpando-Hernandez called in sick less than five hours before his 5 a.m. start time on that Saturday, that caused the work program to be canceled because there was no one to oversee the program, city records show.

“Approximately 12 offenders reported for the Saturday Work Program and were sent home at 0930 hours due to not having anyone to supervise them,” a city investigation into the matter showed. “It is unknown whether the 12 offenders were given credit for showing up on June 17,” city records say.

Another employee who helps the work program operate used vacation time in order to be paid for the hours she would have worked if the Saturday morning program had operated that day.

When questioned, city records show Villalpando-Hernandez first said he called in sick because he was “sick as you can tell by my voice.” He later admitted to planning the Vegas trip weeks prior.

“By Deputy Villalpando-Hernandez’s own admission, he never spoke with a supervisor prior to the scheduled trip to Las Vegas to make arrangements for vacation or to trade a day to cover his time away from work. By all accounts, his calling in sick amounted to abuse of sick leave and should have been noted as an unauthorized absence from work,” the city records indicate.

"These deputies had an opportunity three weeks prior or two weeks prior to this planned vacation to make arrangements and they chose not to. Under those circumstances, I think people need to be held accountable," Alfredo Hernandez said.

When confronted, Villalpando-Hernandez called what he did a “selfish act,” city records show.

Investigators asked Trujillo about why he called in sick but went to Las Vegas and records say he told them, “I was dealing with quite a bit for quite a while. And this whole trip was just to decompress. I wasn’t even planning on going. My ticket was – and my hotel room was purchased for me. I shared the room with a couple other deputies. And we’re all really close friends. We just – I needed that camaraderie.”

Trujillo was fined 10 percent of his pay for 10 pay periods for feigning illness by the Denver Department of Public Safety office.

Villalpando-Hernandez was suspended for six days and was docked 10 percent of his pay for 10 consecutive pay periods by the Denver Department of Public Safety office for feigning illness and conduct prejudicial.

Neither men will lose their jobs as a result of the discipline.

The issue was brought to the attention of internal affairs through an anonymous email.

"The question that it posed in the email was, 'Abuse of sick time?'" Alfredo Hernandez said. The complaint included photos tagging the men in Las Vegas.

The sheriff's office has more than 1,100 employees.