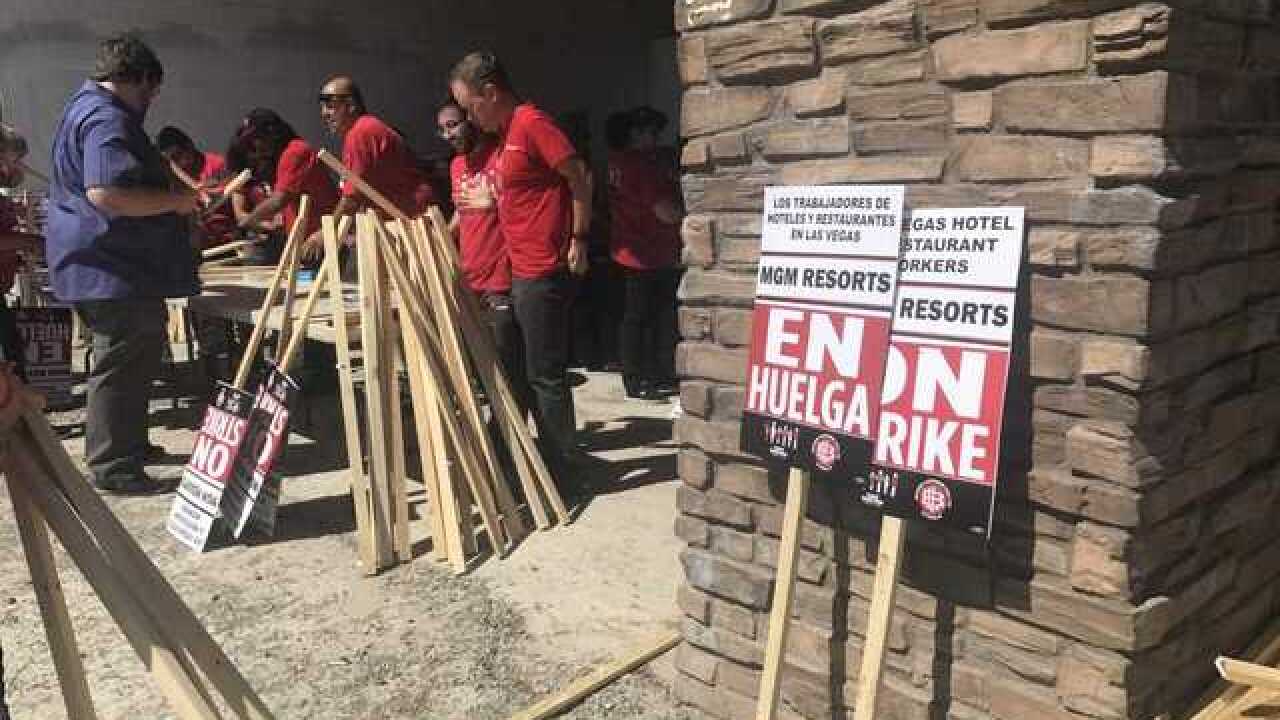 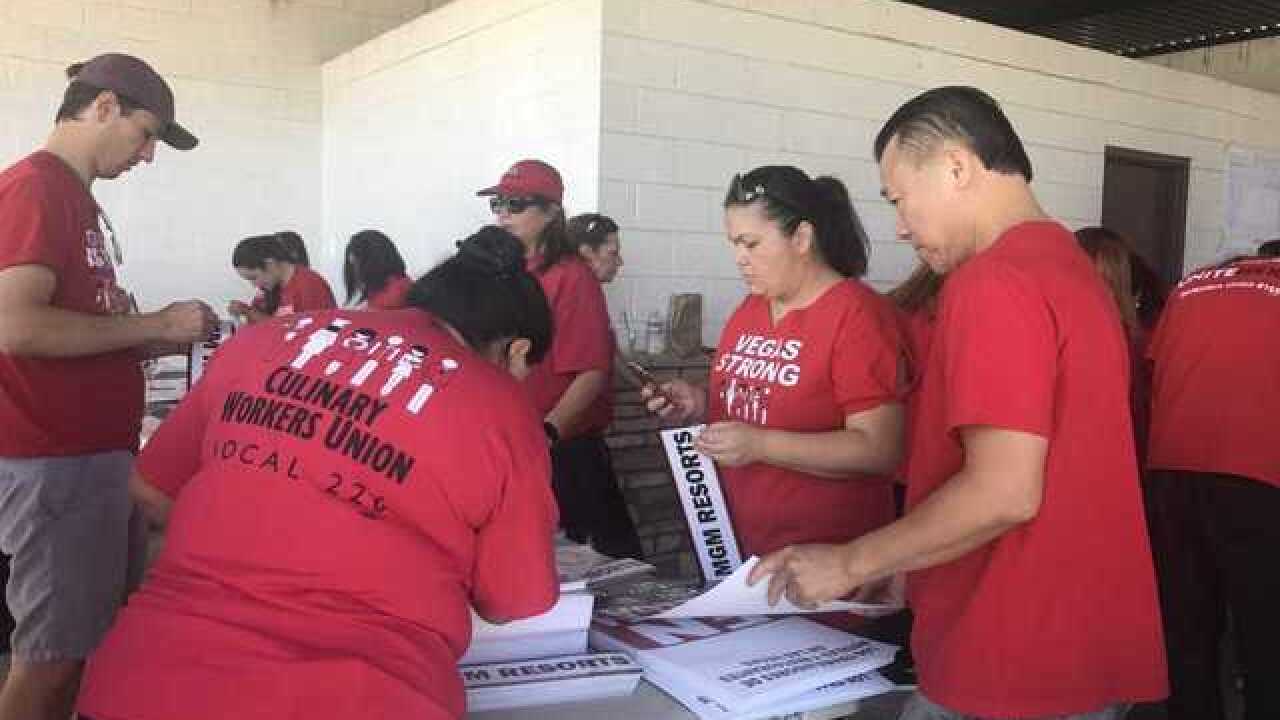 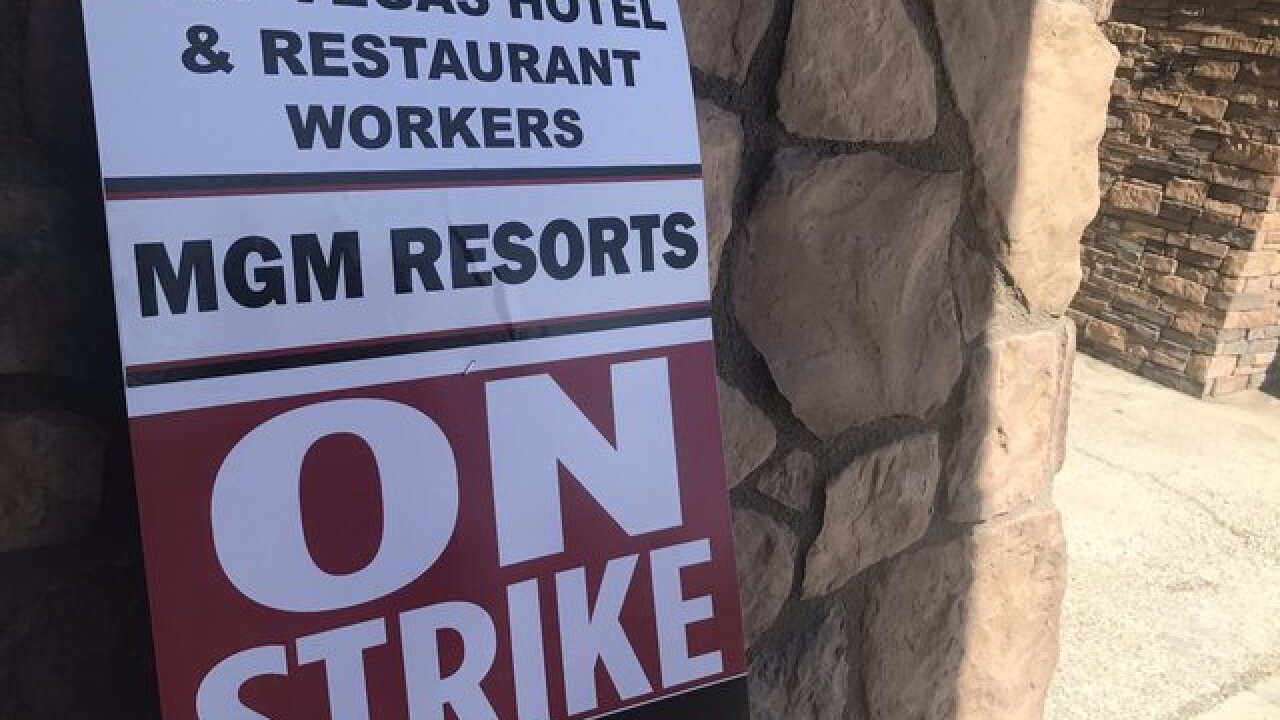 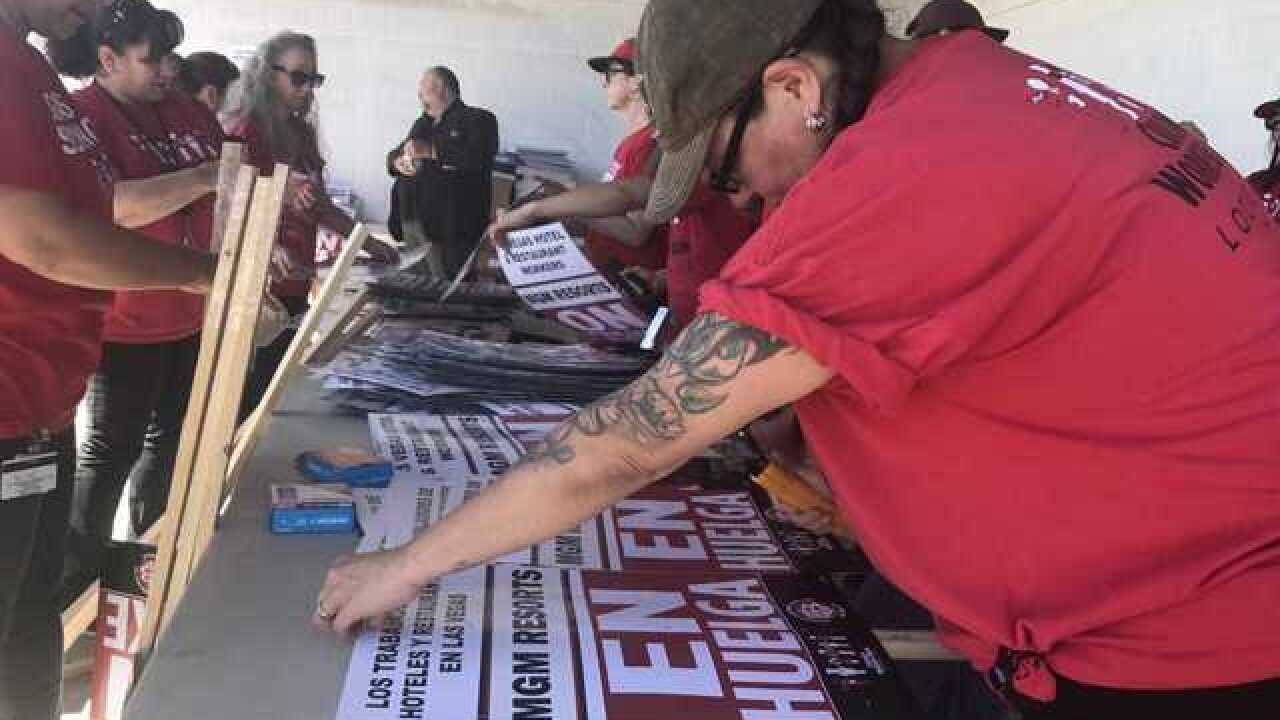 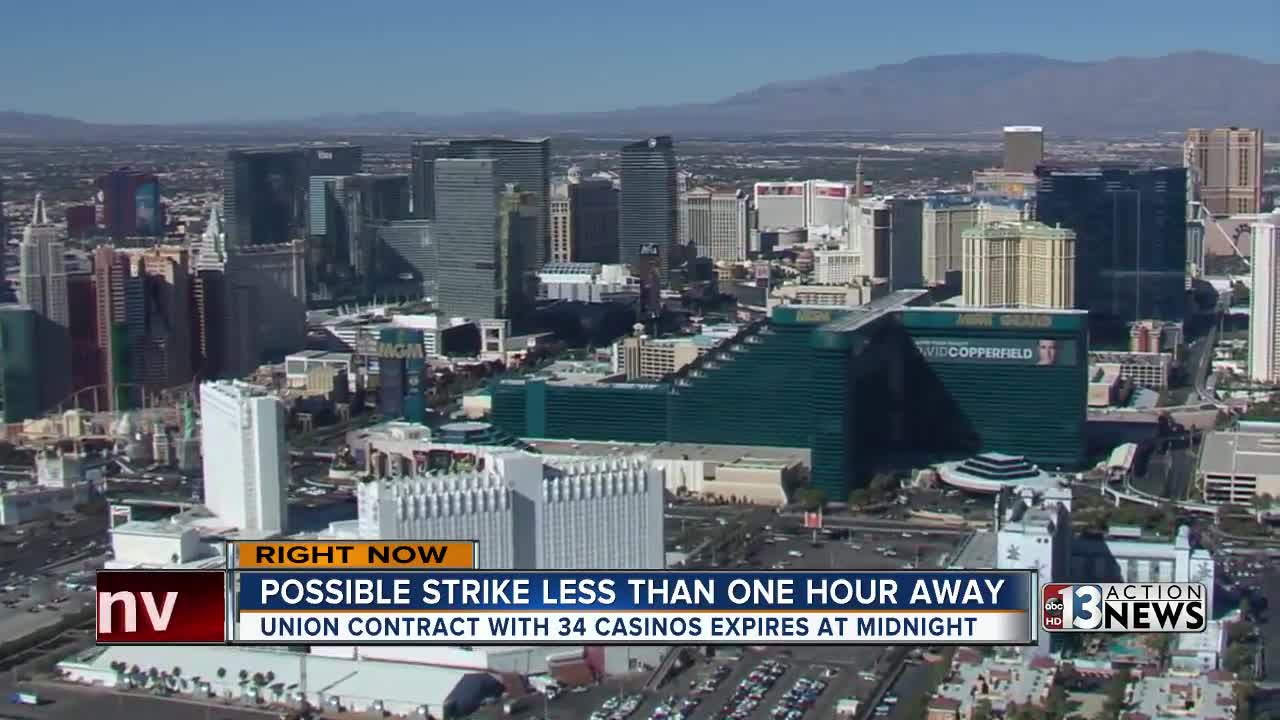 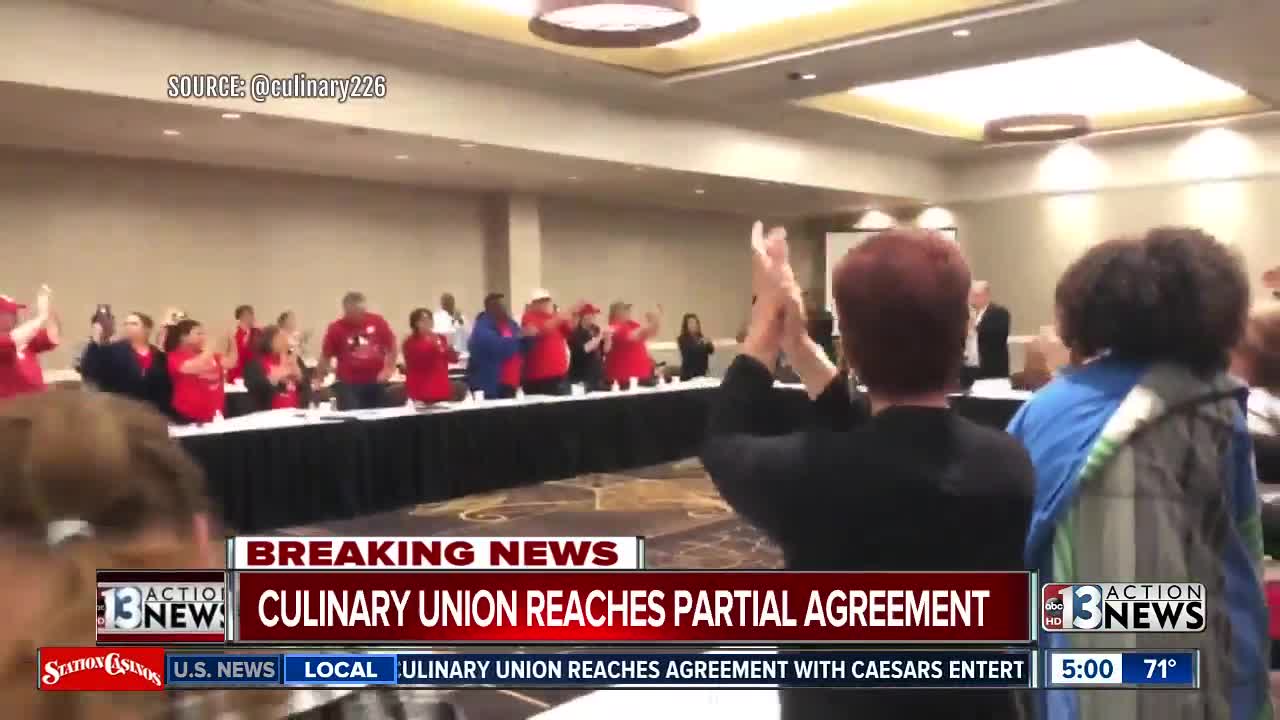 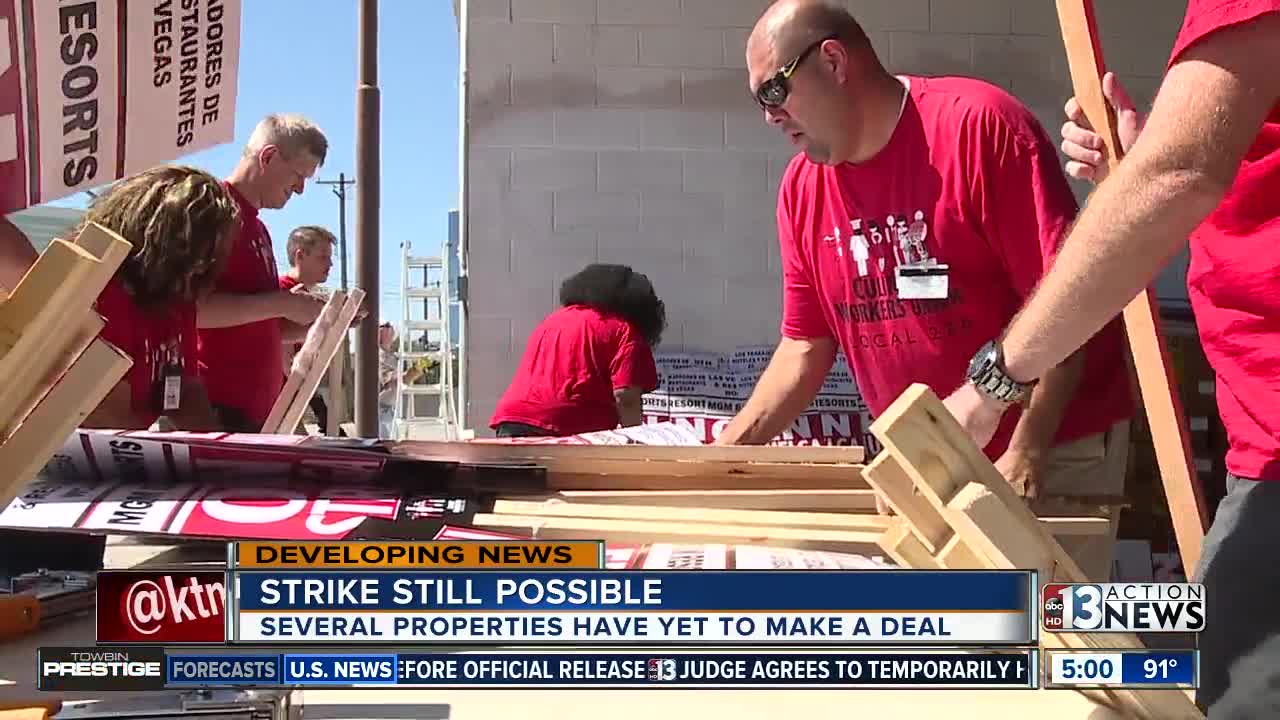 🚨BREAKING🚨
We are pleased to announce that a tentative agreement has been reached with @TropLV! This historic contract covers 730+ workers. A ratification vote will be scheduled soon.

They say this contract will cover more than 730 workers. Negotiations continue for 7,200 workers at 13 other casinos.

UPDATE JUNE 2: Union workers say they have reached a tentative agreement with MGM Resorts International, covering nearly half of the 50,000 employees threatening to strike in Las Vegas.

🚨BREAKING🚨We are pleased to announce that a tentative agreement has been reached with @MGMResortsIntl.

UPDATE JUNE 1: The Culinary Union reached a tentative agreement with Caesars Entertainment shortly after their deal expired at midnight on June 1.

🚨BREAKING🚨We are pleased to announce that a tentative agreement has been reached with @CaesarsEnt.

The union will now seek a deal with MGM properties, other Strip properties and Downtown Las Vegas.

Culinary Union’s Geoconda: @MGMResortsIntl workers play a big part in making the company successful. Workers deserve to have a fair share of that success. @CaesarsEnt workers will not strike now that they have a tentative agreement, but they will be on the picket line to support. pic.twitter.com/QhOPhA62cS

@Culinary226 workers are settting up Strike HQ. @MGMResortsIntl and many downtown hotels still haven't come to an agreement with union on contracts that expired at midnight. @KTNV pic.twitter.com/OlAsn3xYGY

Here is a map of the properties involved.

There are 25 properties that still don't have contracts with about 50,000 workers. Members at the Culinary Union headquarters worked fast to put together picket signs as they get ready for the possibility of a strike.

There is no set date yet but the union saying they'll decide as a whole when the strike will happen. They don't plan on calling one this weekend.

The union says going on strike is its last resort. They want to keep pushing on negotiations.
But MGM Resorts has not called yet to schedule any meeting.

ORIGINAL STORY: With contracts at 34 Las Vegas properties now expired the Culinary Union says its 50,000 members are ready to strike.

🕛Midnight update: Contract negotiations ongoing with @CaesarsEnt. No deal has been reached. The Culinary Union has *not* yet called for a strike walkout.

🚨Friday, June 1: Strike HQ opens at 10am. Media, RSVP to @BethanyKhan for access and details. pic.twitter.com/mrJfSAM3wq

"We are going to call the strike when we say we need to go on strike," said Geoconda Argüello-Kline, Secretary-Treasurer for the Culinary Union.

As they continue planning for a strike, the union is setting up a strike headquarters near their regular office.

RELATED: A look at Culinary Union's history and how a strike could affect Las Vegas

The union says a 30-day strike could cost the MGM Resorts and Caesars Entertainment a total of $300 million.

Experts say they don't really know what kind of impact a citywide strike would have.

"It hasn't happened in over 30 years, so we don't have a huge baseline here to judge what is going to happen," said David Schwartz with the UNLV Center for Gaming Research. "Likely as people have their travel plans interrupted or their vacation plans interrupted.  They'd get frustrated and may not come back."

The negotiations on contracts continued late into the night Thursday as the final minutes of the current contract wound down.

Union leadership says they are planning to strike to certain demands are not met, including livable wages, improved benefits package and job security.

"We are confident that we can resolve the outstanding contract issues and come to an agreement that works for all sides." – MGM Resorts International

“Caesars Entertainment continues to meet with the Culinary Union to finalize a new 5-year contract. We are confident that we will achieve a tentative agreement without a work stoppage.”