Las Vegas police are looking for a man suspected of kidnapping and sexually assaulting an 11-year-old girl in the Las Vegas valley.

Officials say that patrol officers were dispatched to the intersection near Palos Verdes Street and East Twain Avenue around 4:35 p.m. Wednesday after the girl was found injured in a nearby alleyway. She was taken to the hospital to be treated.

An investigation revealed that the girl was walking alone near Twain Avenue and Swenson Street when a man driving a black BMW approached her and offered her a ride.

The girl got in the car and the suspect drove around the area for several minutes. The driver allegedly put a t-shirt over the girl's head and sexually assaulted her at gunpoint.

Police say the juvenile was told to get out of the vehicle in an alleyway near Palos Verdes Street and Twain Avenue where she was found by two passersby.

The suspect is described as a black male adult, between 20-30 years old, tall with a slender but muscular build, a bald head, and hair on his chin. A police sketch of the suspect can be seen below. 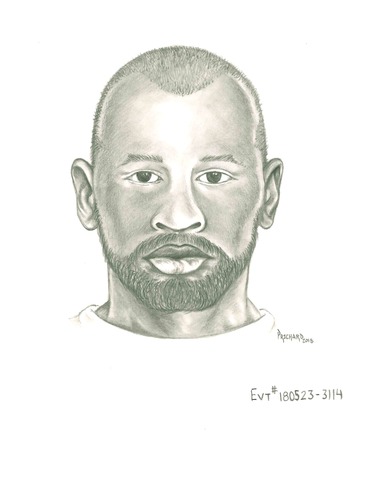 The suspect's vehicle was a black BMW 4-door sedan. Video of the car can be seen below.